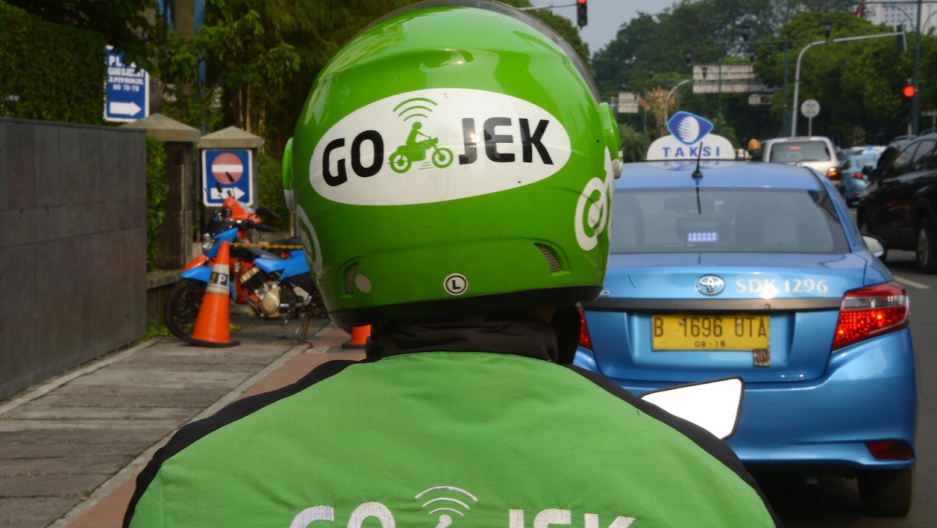 A driver for Go-Jek, the Uber of Indonesian moto-bikes, waits for customers along a street in Jakarta.
Credit: ADEK BERRY
Share

JAKARTA, Indonesia — Everywhere you look, professional drivers are fighting back against apps. In Paris, taxi drivers burned cars to protest Uber. In New York, taxi drivers tried lobbying the mayor for a ban.

And in Jakarta, the city with the world's worst traffic, drivers of the iconic "ojek" motorbike-taxis are fighting back with fists and words against the green-jacketed "Go-jeks" that threaten their way of life.

For years, moto-taxis have been lifesavers for residents of the Indonesian capital who don’t want to spend hours in gridlock or wrestling with the dysfunctional public transit.

Ojek pick-up stands are on pretty much every corner and in constant demand. At rush hour, or when the city is flooded, prices soar and bargaining is useless. A half-hour journey that would normally cost around two US dollars can be as much as four or five dollars. But there's nothing to be done — you need them more than they need you. The system is completely informal, and, according to the drivers, works well this way.

But all this is changing. A few months back, a company called “Go-jek,” one of several companies offering a more organized take on the ojek, launched an app that allows users to order the service online. The app calculates the price of the journey, about 30 US cents per kilometer, and the driver will pick up passengers wherever they are. “It’s simple, it’s practical, and of course, it’s cheaper, there’s no need for the hassle of bargaining. They just give better service,” says 27-year-old customer Boris Anggoro. Go-jek already employs more than 2,500 drivers and is hiring hundreds more as its popularity grows by the day.

Like Anggoro, many in Jakarta are delighted with this “better version” of ojeks. Unsurprisingly, many traditional ojek drivers aren’t. At all. Across Jakarta, banners reading “Go-jeks forbidden here” have appeared on top of traditional ojek stands. Sukisno, a 45-year-old ojek driver and the “boss” of his stand, has put a banner up.

“They’re not allowed to pick up clients from here. We wait here from the morning, sometimes we don’t have clients all day. And they come, they take our clients. You think that’s normal?” he asks. “I’m afraid I’ll get emotional and that there will be clashes,” he adds.

There have been clashes already. Go-jek drivers have been beaten up, threatened, and chased out of what ojek drivers see as “their” territory. Boris Anggoro was attacked while using Go-jek. “A local ojek driver came, he started yelling at us ‘what are you doing here!,’ he threatened my driver and tried to take his helmet off him.”

Boris shared his story on social media, and the post went viral. He says that’s because many have faced similar problems. The intimidation process is working, and some Go-jek drivers refuse to work in certain “sensitive” areas where ojek drivers have bullied their new rivals.

Irvan Mappiasse, a 41-year-old Go-jek driver, worked on a regular ojek for five years. He openly wears Go-jek’s distinctive green jacket, which many of their drivers prefer to hide under another one to avoid confrontation.

Mappiasse doesn’t understand why traditional ojeks feel threatened by the newcomers and don’t want to sign up to the service. “They offer us work, it’s better money, and we get health insurance,” he says.

Sukisno won’t hear of it. “Here I’m the boss. Why should I take orders from other people? I was here before, and I’m a professional ojek,” he says. “Why should I have to go online?”

But Sukisno and other die-hard drivers of traditional ojeks might have no choice but to adapt. In Jakarta, the change is already visible.