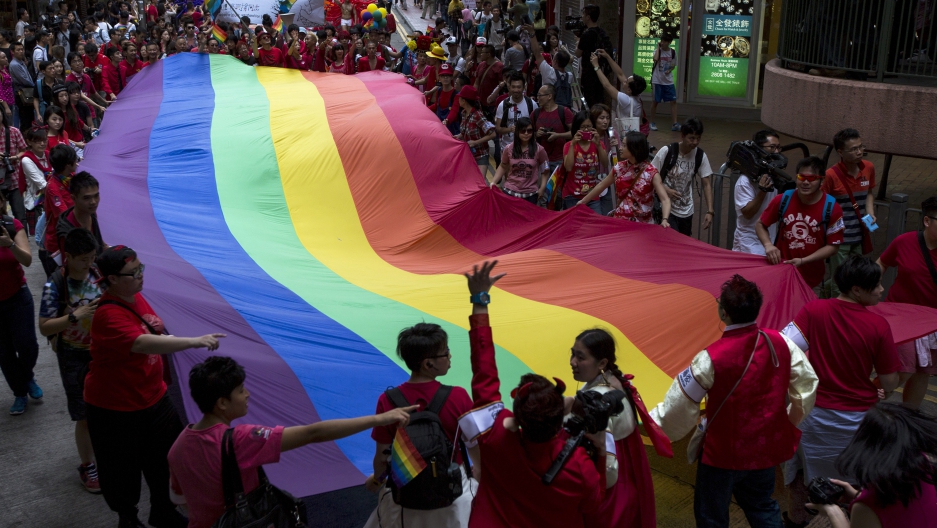 Participants hold a giant rainbow flag during the annual gay pride parade in Hong Kong. Homosexual acts have been legal in China for almost a decade, but attitudes have been slow to change.

A college student is suing the Chinese Ministry of Education for textbooks that describe homosexuality as a mental disorder.

Chen Qiuyan is a 20-year-old communications student at the public Sun Yat-sen University in Southern China. Questioning her own sexuality, Chen began looking at textbooks in her university's library, hoping to find a more credible sources than those typically offered online. Instead Chen found five textbooks that all classified homosexuality as a psychological disorder, some comparing it to necrophilia or recommending shock therapy.

China decriminalized homosexual acts in 1997. In 2001 Chinese Psychiatric Association removed homosexuality from its list of disorders. But all five textbooks Chen checked out from the library were published after 2001.

“Speaking from my personal experience, these textbooks would definitely upset gay students,” Chen told the New York Times. “And I later learned that gay people across the country have been hurt by this kind of textbook.”

Chen reached out to several governmental agencies about the textbooks, and tried to sue the publishing company to pull the books, her suit was rejected. Finally she wrote to the Ministry of Education asking how exactly textbook content was regulated. Chen received no response in the legally required 15 days after she sent her letter, and subsequently filed a lawsuit. Chen filed the lawsuit under a pseudonym hoping to avoid prejudice, but has since used her given name in communications with western press.

The Chinese news service Xinhua reports that a Chinese Gay and Lesbian Campus Association found that 50 percent of Chinese textbooks classify homosexuality as a disorder.