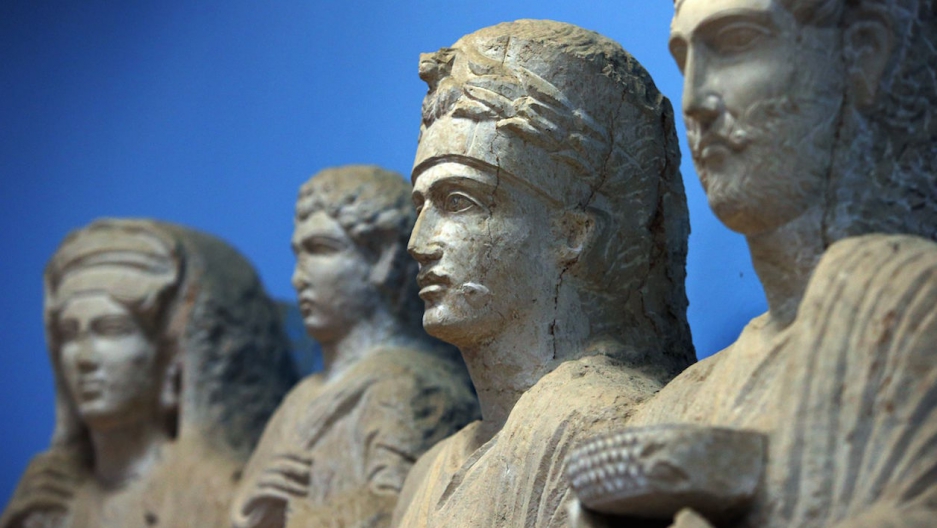 A picture taken on March 14, 2014 shows a sculpture depicting a princess from the ancient Syrian oasis city of Palmyra displayed at the city's museum. Syria's fabled desert Greco-Roman oasis of Palmyra saw its last tourist in September 2011, six months after the uprising began. Its most recent visitors are violence and looting.
Credit: Joseph Eid
Share

CAMBRIDGE, Massachusetts — This summer has been a time of reflection for cultural heritage sites around the world.

The 70th anniversary of the atomic bomb at Hiroshima carried a sidebar reporting how Secretary of War Henry L. Stimson, in his own modest gesture, spared Kyoto, with its ancient temples and shrines, as a target city.

At the same time, the confirmed death of Taliban leader Mullah Omar reminded us that, in 2001, he ordered his fighters to dynamite the giant Buddha heads carved into the rock of Banyan in central Afghanistan.

Just this week came the news that archaeologist Khaled al-Asaad, guardian of the ancient Syrian city of Palmyra, had been killed by the Islamic State.

Destruction of sacred and historical sites has become commonplace. In June, Islamic State fighters destroyed two Muslim shrines at Palmyra and laid mines around the UNESCO World Heritage Site, which dates back 2,000 years. This radical group also smashed statues in Iraq’s Mosul Museum and pulverized the ruins of Nineveh.

Saudi pilots laid waste to the historic cityscape of Sanaa in Yemen, and looters pillaged the Iraqi National Museum.

In Nepal, earthquakes in the Kathmandu Valley demolished intricate wooden and masonry buildings at World Heritage temple sites. In the frantic search for survivors in Durbar Square, ancient carved timbers were tossed aside.

Loss of life and the misery inflicted on innocent people are the first concerns in the daily turmoil that grips our world. But the history of civilization is being dismantled in the destruction of cultural heritage sites. These acts have a meaning all their own.

The United States could take the lead in containing the damage and putting the pieces back together.

The model for such action is part of our own history in the US: the Monuments Men, a special army unit of curators, scholars, museum directors and archivists that searched for the art treasurers stashed away by the Nazis. They were part of a rescue operation that advised the Army Air Force not to bomb historic Kyoto in Japan, and tried to redirect Allied bombing raids to avoid German cathedrals.

This same awareness could be imposed on today’s complicated military landscape in the Middle East.

Already in place is the International Council on Monuments and Sites (US/ICOMOS), a UNESCO-mandated organization that could help our armed forces recruit teams that would include experts in archaeology and art as well as authorities on the broader man-made environment.

These new teams, nimble and opportunistic, could be authorized to take covert actions designed to halt destruction and, where possible, bring in the expertise to rebuild.

The Poles rebuilt old Warsaw after Nazi ideologues leveled the old town near the end of World War II. In Germany, Dresden’s Church of Our Lady, destroyed by Allied bombers, was reconstructed.

The US has spent trillions in Iraq and Afghanistan. It has built highways and airports, but has not invested in restoring the infrastructure of cultural and historical sites that carries deep meaning for societies striving for a more stable future.

For a modest investment, here are some first steps that can be taken:

The destruction of Palmyra has already begun with the demolition of two shrines just outside these irreplaceable ruins. We cannot wait until the Islamic State blows up the Lion God in its craven jihad against idolatry.

The British Government isn’t standing by. A team of “rescue archaeologists” funded by the UK is set to lead efforts to save priceless artifacts throughout Iraq, Syria and Libya.

The protection of irreplaceable historic and cultural remains of early civilizations from armed conflict is no trivial matter. There is no time to waste and much more to lose.

Ronald Lee Fleming, FAICP is secretary of the US Committee of ICOMOS. Anthony Flint is a fellow at the Lincoln Institute of Land Policy in Cambridge, Massachusetts.