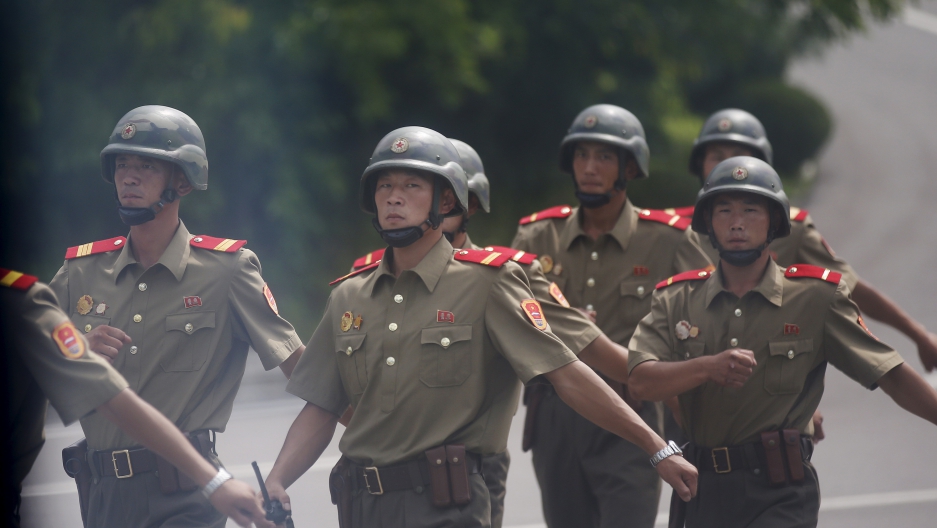 North Korean soldiers patrol at the truce village of Panmunjom in the demilitarized zone separating the two Koreas August 11, 2015.

Relations between North and South Korea are so volatile that one could practically expect a conflict at any given moment.

In fact, there is a long history of conflict between the two countries.

How did we get here?

A brief history of border conflict between North and South Korea

The latest on the list started in the past few weeks, when two South Korean soldiers lost their legs after stepping on landmines.

Officials from South Korea believe the mines were planted by the North as a means of provocation.

South Korea has responded by broadcasting anti-Pyongyang messages through loudspeakers planted near the border. This is the first time in 11 years that the South is using these speakers in response to North Korea's actions.

Straub says that the broadcasts focus on criticism of the North Korean regime and its leaders — something that the leaders there detest "because they have a totalitarian system and a cult of personality."

In other words, North Korea's leaders control the messages that their people hear. The South Korean broadcasts challenge that.

So why would the North raise tensions right now? Straub says North Korea has been "unsettled" every since the sudden death of its leader Kim Jong-Il in December 2011.

"[That left] his very young son Kim Jung-Un in charge and he clearly feels insecure in North Korea," Straub says. "That's evidenced by the execution of his uncle a couple of years ago and the purge of many of North Korea's top leaders."

Straub says Kim Jung-Un uses provocations against the South to solidify his support at home. Meanwhile, the US is watching events on the Korean peninsula very closely. The US and South Korea are currently conducting a long-planned joint military exercise.

"We are in the middle of our annual computer-simulated military exercise with the South Koreans," Straub says. "[Still,] I would be surprised if the North Koreans ... launch any kind of direct, significant, frontal attack."