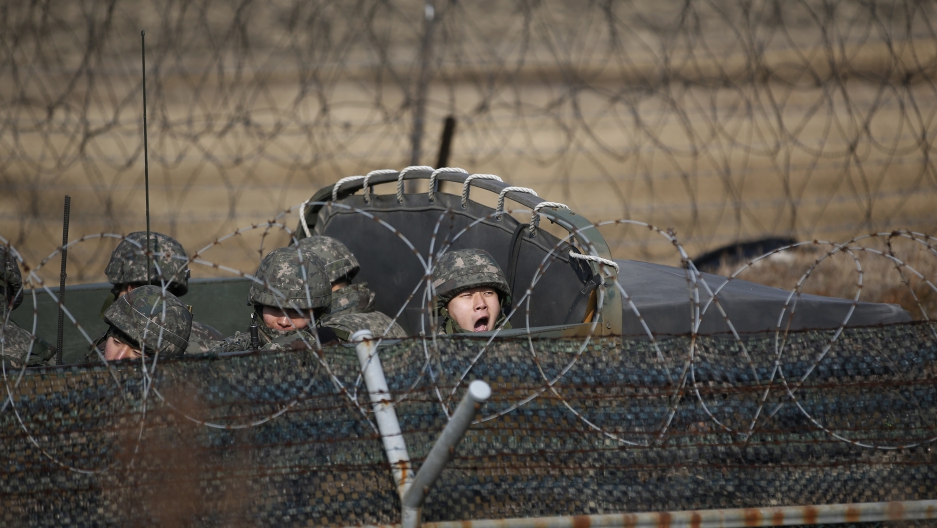 A South Korean soldier, in a military truck, yawns as they travel along a barbed-wire fence near the demilitarized zone separating the two Koreas, in Paju, February 19, 2015.

North and South Korea are at it again, trading threats and attacks across the de-militarized zone (the DMZ) that separates the two countries. Last Thursday, the war of words escalated as soldiers exchanged artillery and rocket fire, according to the South Korean Defense Ministry.

The latest tensions erupted between the two countries after two South Korean soldiers were wounded by landmines in the DMZ last week. South Korea blamed the North for sneaking into the zone to plant the mines. But in the charged atmosphere on the Korean peninsula, the South had to be careful in its response. So it turned to a tactic it hadn't used in 11 years — and knew would infuriate the North's leaders.

South Korea began blasting recordings criticizing the North's leaders from loudspeakers on its side of the border. The messages are so loud they can sometimes be heard a dozen miles inside North Korea. The North promptly called this a declaration of war and threatened to blow up the speakers.

At first, North Korea just retaliated in kind, blaring its own propaganda over the border. Then, on Thursday, its soldiers launched a projectile towards South Korea's speakers. South Korea responded with artillery fire. The two countries engaged in tense talks before agreeing to de-escalate tensions on Monday.

Such clashes in the Korean Peninsula are hardly new. The two countries never signed a peace treaty after their war in the 1950s, so they remain technically at war. Their ceasefire has mostly held, but as you can see from the highlights of their conflict below, tensions have erupted regularly.

How do you infuriate North Korea's leaders? Try blasting criticism at them through giant speakers

The Korean war between North and South Korea begins, with help from the Soviet Union and China on one side, and the US and the United Nations on the other.

The Korean war ends when a ceasefire agreement is signed. The Korean Demilitarized Zone (DMZ) is created to separate the two countries.

The Korean DMZ conflict begins as troops from both countries invade the demilitarized zone and engage in skirmishes.

There is another assasination attempt of President Park Chung-Hee by a North Korean commando in Seoul. First Lady Chung-Hee is killed.

North Korea sends thousands of military troops into the DMZ as it announces it will no longer adhere to the armistice of 1953.

South Korean President Roh Moo-hyun walks across the Korean Demilitarized Zone for talks with Kim Jong-il. The talks call for peace on the Korean peninsula and an update to the 1953 armistice.

The two sides exchange fire near the maritime border for the first time in seven years.

A South Korean naval vessel sinks, killing 46 sailors on board. A month later, South Korean researchers conclude the cause was a North Korean torpedo.

Fire is exchanged between two patrol boats in the Yellow Sea. Days later, there is more fire as balloons allegedly carrying anti-North pamphlets are gunned down.