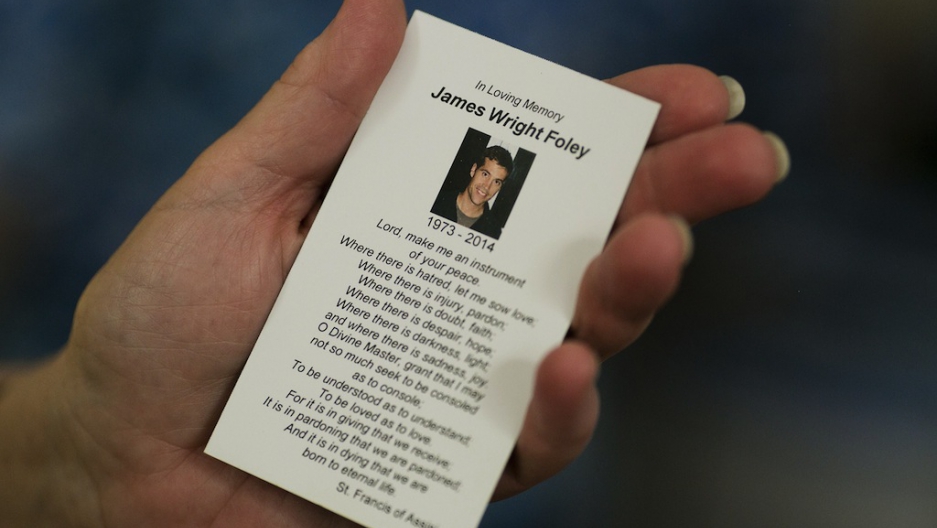 A parishioner holds a prayer card in memory of James Foley after a Catholic mass at Our Lady of the Holy Rosary parish August 24, 2014, in Rochester, New Hampshire. The family and friends of murdered US journalist James Foley attended the memorial mass and offered prayers for the safety of his fellow hostages in Syria.
Credit: Dominick Reuter
Share

One year ago today, a video appeared that, it’s fair to say, changed lives.

It showed the murder of James Foley, an American journalist, at the hands of the Islamic State. It devastated his family, his many friends and the colleagues who valued him, not least here at GlobalPost. Jim had reported for us from Afghanistan, Libya and Syria, where he was kidnapped in November 2012.

The video that broadcast his death to the world ended more than 20 months of continual efforts by the Foleys, GlobalPost and investigators to find Jim and bring him home. It shocked a world that thought it had already seen the worst that terrorists were capable of. It wrenched deep reflections from journalistsand non-journalists, American and non-American alike, about their sense of mission and what they’d be willing to do to fulfill it. The video of Jim’s murder, along with others that showed fellow journalists and aid workers just as brutally put to death, is one of the reasons why those of us outside Syria hear so few firsthand reports from inside it any more. They also prompted the White House to reconsider how the US should respond when terrorists take Americans hostage.

So yes, we remember that video — or rather, we can’t forget it. But we don’t want you to watch it today. We’d much rather you watched the videos that Jim filmed, when he was meeting child casualties in Syria, interviewing rebels in Libya or witnessing US soldiers fight their way out of an ambush in Afghanistan. We’d rather you read what he meant to us, those he worked with or simply touched, and heard how it feels to be one year into a loss that will last forever.

“When I looked at my friend and colleague on the day of his death, forced to kneel in the sand and facing certain death, I saw a man whose strength, faith and courage were unbowed,” writes GlobalPost founder and CEO Philip Balboni, giving his full perspective on the tragedy for the first time today. “The Islamic State could take his life but not his spirit or humanity. Jim Foley was a fine and principled journalist and I shall regret for as long as I live that I could not gain his freedom.”

Lest we forget, the Islamic State hasn’t stopped killing — nor are its targets only Westerners. Today news broke of another atrocity: the murder of Syrian archaeologist Khaled al-Asaad, guardian of the ancient city of Palmyra, one of the most important historical sites in the Middle East.

Extremists took the 82-year-old hostage over a month ago, apparently in a bid to force him to reveal the location of Palmyra’s most valuable treasures. When he refused, the militants beheaded him and hung his body from one of the city’s ruined columns.

For months now, IS has been laying waste to mosques, shrines, churches and artifacts across territories in northern Iraq and Syria that have fallen under its control. What they don't smash, they sell on the black market to help fund their bloody campaign. Asaad, it seems, died trying to prevent the same cultural terrorism being waged on the site he spent his life studying. We can only hope his death won’t be in vain.

In any other sport, seven deaths in two months — four of them in one weekend alone — would be grounds for a serious rethink. In Spanish bull running and bullfighting, however: Nah, not so much.

Many would say they’re not really sports, just choreographed cruelty. Bullfighting is aptly defined as a blood sport: the “entertainment” consists of the deliberate pursuit of injury and death. It’s supposed to be the bull’s, but just occasionally it’s the matador’s. Human blood is more often spilled outside the bullring, in fact, during the bull runs held every summer across Spain. Tens of thousands of people flock to the annual events — which involve hurtling down narrow streets pursued by a herd of bulls on their way to the ring — and hundreds of them wind up injured. It’s hardly surprising when you consider that many participants are worse-for-wear tourists whose closest bovine encounter to date is chowing down on a steak. (Just blame Hemingway.)

This year seven people have been gored to death during the runs, which is an exceptionally bad record even for a pastime this dangerous. Is it time to put a stop to bull running and bullfighting in Spain? Hey: YOLO, right? Though we’re not sure that’s why the bulls do it.