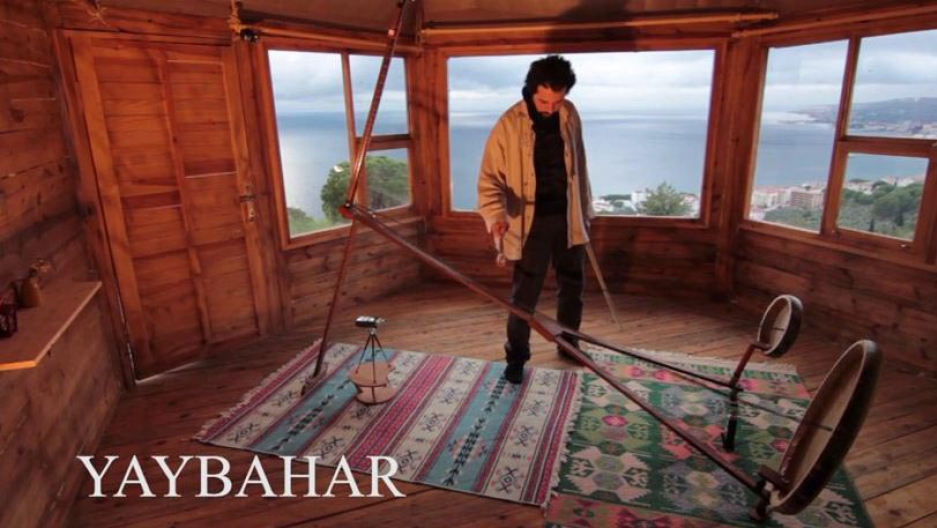 Görkem Şen plays the Yaybahar with the Marmara Sea in the background. He hopes his instrument will soon be as common as a violin or cello.

In Turkey, a new instrument has been invented that makes crazy galactic and laser-gun sounds. It’s called the Yaybahar, and it’s completely acoustic. “This is real time, acoustic, string synthesizer,” Gorkem Sen, the instrument’s creator, explains.

Gorkem invented the Yaybahar about six years ago in a hunt for his own unique sound. The 33-year-old musician looked for inspiration to find his own unique sounds from all sorts of instruments: the Australian didgeridoo, the Turkish Ney and, most importantly, the thunder drum. The thunder drum is a small cylindrical instrument that has two drum-like membranes linked by a spring. When it’s shaken, it makes big, echoing sounds, like rolling thunder — and like the Yaybahar.

The Yaybahar is huge — it takes up Gorkem’s living room. The membranes are hooked to two very long springs that bounce all over when they’re touched. The springs attach to a tall neck – like a guitar or cello, but with just two strings.

After much trial and error, Gorkem found out that when he hits the membranes with a padded drum stick, the sound reverberates. When runs his finger down a coil, it makes an odd galactic "whoosh." And when he plucks a string on the fingerboard, it goes "pew" — a laser-gun-like sound.

Along with his ability to play it, the instrument itself has evolved from as many as 30 coils and membranes down to the two-springed Yaybahar Gorkem plays today.

The bouncy coils play a huge role in the Yaybahar’s unique sound — so it makes sense that the instrument is named for them. “The coil string is ‘yay,’” Gorkem explains. "Bahar" also means spring — as in the season. The whole idea of new life, a new beginning is important to Gorkem, he says.

One of his favorite songs to play is Gnossienne No. 1 by the French composer Erik Satie. The song is usually played on the piano. For the Yaybahar, Gorkem uses a bow on the strings, like one would on a cello. The result is a rich, reverberating sound that feels like it gets deep into your ears. “When you listen live this is really effective, really good mood and really good frequencies on the air,” Gorkem says. “It’s really delicious for ears.”

Gorkem and his Yaybahar have been touring lately in Turkey and around Europe. Audiences have loved it, he says. Though he admits it’s probably still mostly a curiosity. But in the future, he can see it becoming a new class of instrument. Until then, Gorkem wants to focus on understanding the full potential of the Yaybahar, and all the sound it has to offer.