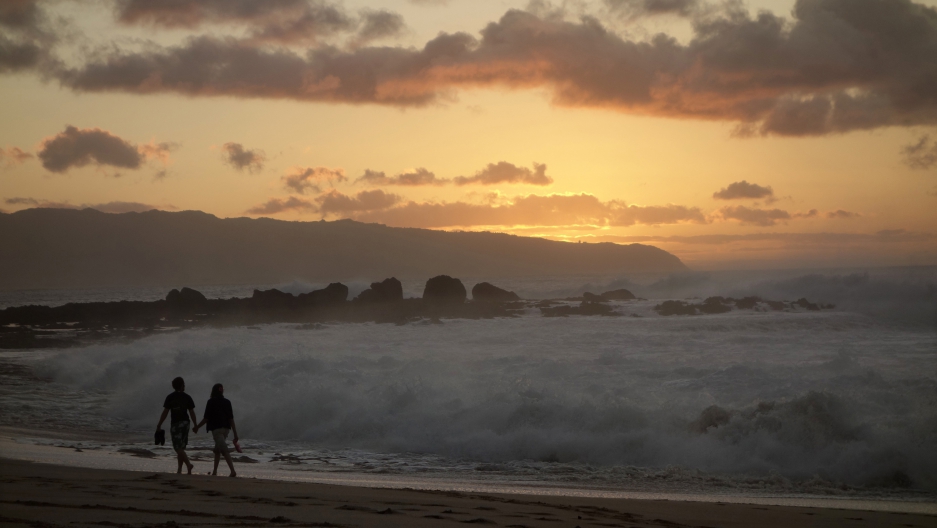 A couple walks along the rough surf during sunset on Oahu's North Shore.

The middle of August often conjures images of books on the beach, road trips, sitting next to the pool and visits to relatives. But as it turns out, only half of us are actually taking those trips.

New research suggests that 56 percent of Americans haven't taken a vacation in the past 12 months. That's 10 million more people than the year before.

For those who have managed to pack their bathing suits and books, they aren't taking the full time off — many Americans work through their vacations, at least some of the time.

“Americans have very low expectations about vacation time when compared with the rest of the world,” says Kathleen Gerson, a sociology professor at New York University who specializes in issues related to work, family, and gender equality.

The United States is the only the only advanced nation that doesn't mandate time off. And overall, Americans are taking the least amount of vacation in nearly four decades.

“Europeans routinely take four to six weeks — it’s mandated, it’s expected, and no one has to apologize for it. In fact, they probably have to apologize for it if they don’t take it,” Gerson says. “But there’s been a convergence of forces in the US, both in terms of employer pressure, employee fears and concerns about losing their jobs or not moving ahead, and just this general notion of work ethic that has made it very difficult for Americans to start to think systematically and humanistically about how important taking time off is for regenerating our batteries and being productive workers.”

Gerson says Americans frequently participate in a sort of “false thinking” about vacations, viewing the time off as a distraction from work. But she says a person’s best thinking can be done on a golf course, at the beach or in a swimming pool.

The trend of working more and playing less has more to do with a culture of “vacation-shaming” than it does with money, Gerson adds. Readers on a PRI discussion thread backed her up, with some saying they've been made to feel bad for taking a vacation and others saying being reclassified as "independent contractors" erased their dedicated vacation time.

“In some sense it would actually be good news if this were simply a matter of recovering from a temporary downturn,” Gerson says. “But, unfortunately, we’ve seen these trends happening for decades now, and they seem to be intensifying. The downturn certainly didn’t help — I’m sure it did contribute to it — but underneath these short-term economic ups and downs is a growing sense of concern and fear about not simply moving ahead, but keeping one’s job.”

Gerson says workers increasingly feel that they have to prove that they are working hard — and many feel that being in the office is the best form of proof. But it may be time for Americans to rethink their ideas about work and life if they ever want to find fulfillment.

“We see this in surveys everywhere — if you ask workers and even managers what their ideal would be, they all espouse a balanced notion that being a good worker also means having a full and integrated life,” Gerson says. “Unfortunately when you ask them what they think their options are, almost everyone says, ‘This is not something I can achieve. In a better world, this would be my goal, but if I can’t achieve this, I have to be able to keep my job to prove that I’m a good worker.’”

So is a tenured professor like Gerson following her own advice and getting enough vacation time? In short, no.

“People look at me and don’t quite understand it,” she says. “Part of it is that the process that we have of building careers takes its toll over time, so that by the time you achieve a measure of security — if you’re lucky to do so in this society — you’ve internalized these pressures and expectations.”

Gerson, who says she loves her work, recently took a vacation to oversee and attend her daughter’s wedding this summer.

“I have to admit that it was hard to pull back from work,” she says. “But once I was there, I realized how important it is for all of us to do that.”

This story first aired as an interview with PRI's The Takeaway, a public radio program that invites you to be part of the American conversation. Do you take vacations? Let us know in our comments section.