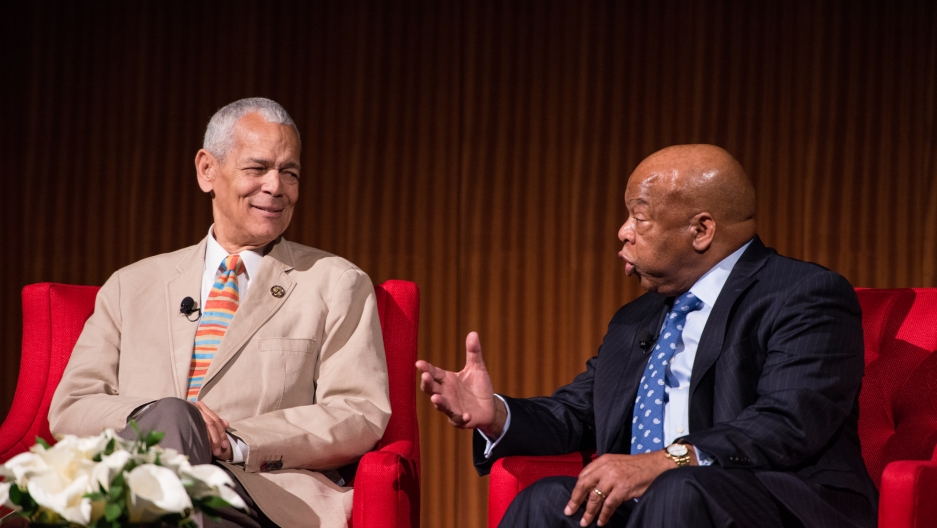 Julian Bond and Congressman John Lewis participate in a panel on the “Heroes of the Civil Rights Movement: Views from the Front Line” at the Civil Rights Summit at the LBJ Presidential Library.

We were gathered around a weather-beaten table on one of the top floors of a nondescript red brick building in the pre-gentrified South End neighborhood of Boston. This was the headquarters of what would turn out to be the most respected and honored documentary series about the civil rights movement, and the seminal experience of my career.

Our boss, Henry Hampton, opened that first production meeting making two things clear — the name of the series would be "Eyes on the Prize: America’s Civil Rights Years 1954-1965." (All worries about how that long title would fit into the tiny squares of the printed newspaper TV guides were summarily dismissed.) Second, Henry declared the narrator of the series would be Julian Bond. Julian Bond? We were confused. Bond was not a professional narrator; in fact, he’d never narrated so much as a public service announcement.

Of course we knew Julian Bond’s civil rights credentials — as a member of the Student Nonviolent Coordinating Committee — he’d been a leader during some of the most dangerous protests during the 10 years of history we were chronicling. He’d gone on to a distinguished career in politics marked by his two-year battle to be seated in the Georgia House of Representatives. A fight that went all the way to the Supreme Court when the court finally ruled that his opposition to the Vietnam War did not make him ineligible to be a State Representative. Julian was the first President of the Southern Poverty Law Center, an organization he co founded with Morris Dees. He was already in the history books when I met him, already embraced by an international community of activists. That’s why we saw him as an important witness whose story should be a part of the series. But Henry said no, one of the few times he made no room for consensus decision making. Julian Bond would be our narrator.

He was never so right. Henry saw then what we didn’t appreciate until much later — that Julian’s first-hand experience would bring a depth and gravitas to the storytelling that would trump even the most skilled professional narrator. And his voice was a wonder; Julian’s even, unhurried read was just the right note to accompany a story that was at turns horrifying, heartbreaking and hopeful. He gave no hint of partisanship; instead he was deliberately unobtrusive as he wove the narrative of the young Freedom Riders signing their wills before they went off to ride the segregated buses; the funeral of the four little girls killed by a bomb blast while in Sunday school; and the triumph of voting rights demonstrators at Selma joining the Reverend Martin Luther King Jr. in the 50-mile walk to the capital of Montgomery.

In the years following Eyes I would cross paths with Julian at discussions about the meaning of the civil rights movement. I hadn’t seen him for a while when I bumped into him a couple of summers ago on Martha’s Vineyard. We were both at a discussion about race relations attended by more than a few notables. I reminded him who I was and was immediately treated to the humor he was famous for. “Oh no," he said laughing, "If you weren’t here, I was going to tell everyone I did all the work on Eyes.”

Eyes brought Julian another kind of recognition. He went on to enjoy a second career as a narrator. But his first mission, his lifelong work, was always social justice. He distinguished himself as an academic and as a global organizer traveling the world sharing protest strategies. And always, always mentoring the next generation of activists. He saw his chairmanship of the NAACP as part of that work. And he lobbied hard for a young Benjamin Jealous to succeed him. Nobody knew better than he the power of youthful energy and passion.

I suppose it is inevitable that this is the season of loss for the now-aged, once-young people whose determination and sacrifice more than 50 years ago fundamentally changed this country. But it still hurts when a giant like Julian Bond slips away. I’m ever so grateful that I got to know him and that because of "Eyes on the Prize" his voice will never be stilled.

Callie Crossley was a producer for the iconic documentary series  “Eyes on the Prize: America’s Civil Rights Years,” which earned her an Oscar nomination, a National Emmy, and the Alfred I. DuPont-Columbia Award. It was re-released by PBS in 2010. A version of this story first appeared on WGBHNews.org.