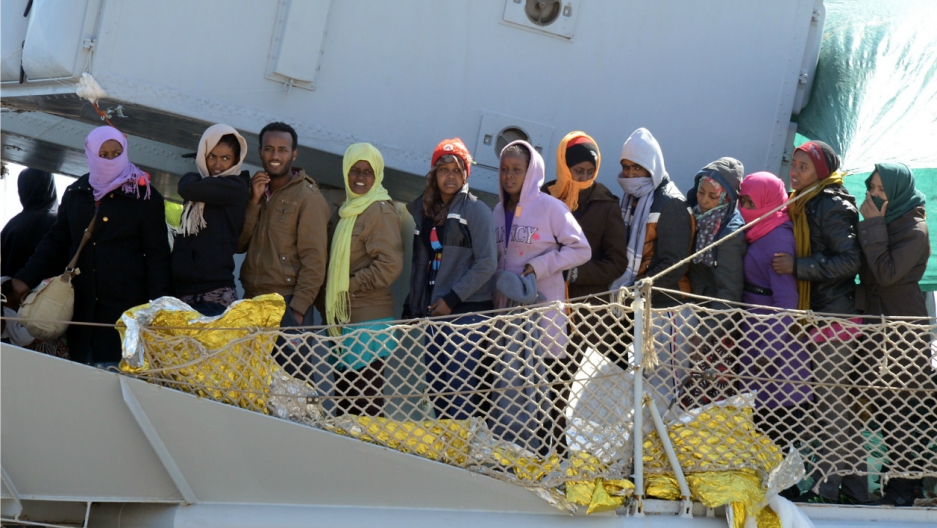 A boat transporting migrants arrives in the port of Messina after a rescue operation at sea on Apr. 18, 2015 in Sicily. A surge of migrants pouring into Europe from across the Mediterranean won't end before chaos in Libya is controlled, Italy's prime minister said.
Credit: GIOVANNI ISOLINO
Share

DETROIT — The Mediterranean boat crisis has become primarily a refugee crisis, since the majority of those taking the sea route to Europe are fleeing war, conflict or persecution.

The United Nations' refugee agency (UNHCR) insists in a recent report that the displaced are refugees, not merely migrants, meaning they are entitled to extra protections under international law.

The distinction between the two is critical and often misunderstood. Refugees are victims of circumstances they don’t control. Their plight evokes sympathy and a moral duty to provide aid.

Migrants are defined as individuals choosing to relocate, typically in search of economic or social opportunities.

The movement of refugees is often met with governmental resistance. Both Europe and the United States seek to fulfill humanitarian obligations while striving to control borders and acknowledge concerns about undocumented immigrants.

Efforts to classify individuals by race and culture — known as typologies — influence the intensity of the debate. The UN Convention and Protocol’s definition of “refugee” emphasizes “a well-founded fear of persecution.” This factor ignores reasons for population movements, including economic and social needs.

UNHCR uses the “refugee” designation to apply pressure on developed countries to accept them.

The classifications of “migrant” or “refugee” can be over-simplified, causing harm to both groups.

The motivation for moving does not easily fall into “forced” or “voluntary” categories. A person can simultaneously flee persecution and still seek opportunity.

For example, the US and Europe agree to the principle of nonrefoulement — a promise not to return a person to a country where her or his life or freedom would be threatened. This humanitarian norm is designed to provide safe havens. In practice, however, the “mixed flows” of refugees and economic migrants tend to leave many behind.

The motivation for moving does not easily fall into “forced” or “voluntary” categories. A person can simultaneously flee persecution and still seek opportunity. Typically, ethno-religious, social, economic and political factors are inextricably combined as a more realistic explanation of population movements.

Developing countries host about 86 percent of the global refugee population, but are ill-equipped to provide economic and social services. Dwindling amounts of international aid force many to move again, and even again, in search of secure places to live. Onward migration also creates opportunities for establishing dangerous, illegal smuggling rings. Under these circumstances, it is difficult to assure fairness.

Dimitris Avramopoulos, the European commissioner in charge of migration, has proposed sending back home people who are just in search of a better life. Such a policy, he says, would help bolster public support for protecting those most in need. This would mainly include Eritreans, Afghan people and Syrians, who were the majority of worldwide refugees in 2014. Avramopoulos’ plan shows that heavy reliance on inflexible classifications ignores the reality of what prompts people to move.

A Syrian who crosses into Turkey as a refugee, but later boards a boat heading for Europe, then becomes a migrant or asylum-seeker. As a refugee In Turkey, protection from persecution would be afforded. But as a new migrant seeking opportunity in Europe, refugee-type protections may not be available. This remains a point of contention as the European Union seeks to coordinate the handling of people arriving to their borders and shores.

The situation in Myanmar sheds additional light on the semantics. The government has repeatedly rejected the label “Rohingya” when referring to the 800,000 ethnic Muslims living in the western Rakhine state. With no official recognition in Myanmar, the Rohingya are forced into camps for displaced people. Many then risk perilous sea escapes to Thailand, Indonesia or Malaysia.

This situation has become a crisis for Southeast Asia. In late May, a conference in Bangkok addressed possible cooperative solutions. Myanmar refused to attend until it was assured that the term “irregular migrant” would be used instead of “Rohingya.”

Irregular migration has no universally accepted definition. To destination countries, the term means illegal entry with the intent of staying. If the international community adopts this view, the movement of Rohingya seeking to relocate is likely to increase.

The US, EU and Southeast Asian countries fail to adequately recognize that migrating people have diverse incentives and may ultimately decide that the benefits of relocating outweigh the costs. Those crossing borders are responding to economic, social and political pressures over which they have little control. Still, they can exercise only a limited degree of choice in the selection of destinations and the timing of their movements.

While both migrants and refugees move for better opportunities, refugees are more inclined to move to countries where they have networks and have heard about success stories.

As they arrive, refugees and migrants should be seen as having potential to contribute to their host communities.

The right to movement is becoming a civil rights issue of our time. Mobility, not typology, should be central to developing migration policies.

Lolita Brayman is a journalist and attorney at George P. Mann & Associates, specializing in refugee and asylum issues. She tweets @lolzlita. George P. Mann has been an immigration attorney for more than 30 years.