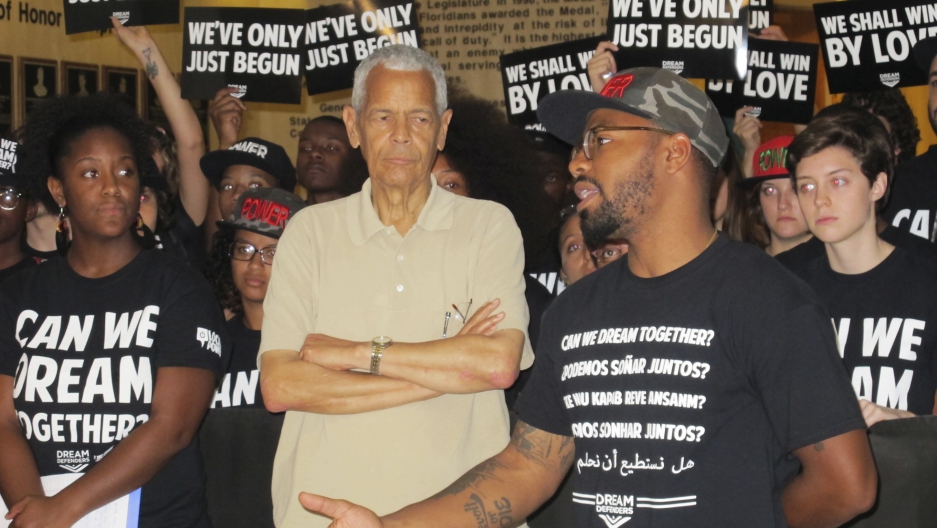 Julian Bond listens as Phillip Agnew, executive director of the Dream Defenders announces an end of a 31-day sit-in at the Florida State Capitol in Tallahassee in 2013. The group was demonstrating against the state's "Stand Your Ground" self-defense law.

Julian Bond arrived at the Brandeis University television studio 20 minutes ahead of our scheduled interview in April. It was in keeping with his reputation that spanned decades as a man ahead of his time. He was just 17 years old when he joined the civil rights movement in the late 1950s, was the youngest founding member of the Student Nonviolent Coordinating Committee and had his name placed in nomination for vice president at the fractious 1968 Democratic National Convention. He withdrew because he was too young to assume the office.

But Julian Bond not only made civil rights history, he chronicled it, including the history of Boston desegregation, as we heard in the 14-part Award-winning PBS series “Eyes on The Prize” that was narrated by Bond.

Bond was not detached from the subjects of his narration, and in my Brandeis interview with the civil rights icon, he discussed the Republican Party's lambasting of President Barack Obama, voting suppression, the 1961 Freedom Riders and the re-creation of their journey in 2011, his anger over "the treatment of President Johnson" in the movie "Selma" and his personal reflection on Boston’s lingering reputation for bigotry.

On the election of America's first black president, Bond said he never thought it could happen in the United States. He said he supported Hillary Clinton for the Democratic presidential nomination in 2008, but went on to become friends with President Obama. In the process, Bond became fiercely protective of the president, whom he says has been the target of animus that can only be explained one way:

REPORTER: What makes you think that and why do you say he’s viewed (this way) as a result of the color of his skin?

BOND: “I know that’s the case. I can’t prove it and say here’s the reason why, this is my proof. But I know it to be true.”

REPORTER:  “No doubt you met with the President and I’m just wondering has he ever expressed concerns about this central issue in the United States that we call race?”

BOND: “Not to me. We’ve met a couple of times together about this or that or the other thing. I’ve tried to be encouraging to him because he needs, any president needs, all the encouragement he can get. I don’t care who he is.”

Barack Obama was not the only US president whom Julian Bond befriended. In the movie "Selma," President Lyndon B. Johnson is portrayed as complicit in an effort to discredit Martin Luther King and to delay voting rights. It’s a portrayal that angered Bond.

“Now if you follow politics and you know anything about President Johnson, there’s got to be things you don’t like. But one of the things you cannot dislike is Johnson’s attitude toward voting rights. He’s the best civil rights president we have ever had in this country. There’s nobody better than Lyndon Johnson. And to say in this movie that he played a bad role in the struggle for voting rights is just a terrible, terrible mistake.”

Bond said he was angry over what he called contemporary Republican efforts to suppress the voting rights of African-Americans, Latinos and other mainstays of the Democratic Party leading up to the 2016 presidential election.

Remembering Julian Bond: The voice of 'Eyes on the Prize'

Bond also commented on the Black Lives Matter protests against police shootings and civilian killings of unarmed black men and women, comparing it to the Occupy Movement.

Julian Bond’s visit to Brandeis in April was one of the few times he has been back to the Boston area during the post-anti-busing years beginning in the 1980's.

“I hate to say it. I’m a little wary of Boston today.”

And for Bond, the Red Sox — the last major league baseball team to admit black players — was still a source of trepidation.

“I’m married to a woman who is a tremendous sports fan and she wants to go to a baseball game. And I said, ‘no, I don’t want to go. I don’t want to go to a game there.’ And it turned out in this particular case I went with her. And the people in front of us are telling us jokes — they turned out to be college students looking for recruits to their college — and they said they made sure they never told any black people about their college. They didn’t want that to happen. And it just reinforced my feelings about Boston.”

I asked Bond, if he could say one thing about changing that perception of Boston to the city's mayor, Marty Walsh — who realizes that this perception is a problem, and who recently accepted a $1 million grant to engage communities around race, with busing as the backdrop — what would it be?

But Bond also conceded his view of Boston may be framed by a picture of the city that many now consider outdated.

The civil rights legend had returned to Boston to honored with the 2015 Richman Distinguished Fellow in Public Life Award at Brandeis University.

“I never considered this would happen to me. I am flattered that Brandeis has chosen to give me this award. It’s flattering. I’m happy to see it, but I never thought it would happen.”

Julian Bond received more than 20 honorary degrees in his life.

But he told me that the greatest honor for him, ever, was the honor of serving and marching in America’s ongoing and changing struggle for civil rights — for everyone.