This year, Charis Stiles decided to make a new diorama every month as her 2015 Creative Resolution. Each month she has started a new project --- but wrapping them up has been a challenge.

Let's review the status of the Year of the Diorama! Since we spoke last, I have finished only one. I have started many, but only one has been completed. Let me explain:

Cat Pope Diorama Completed! This is a small diorama made from the box of my old business cards. It's pretty simple in design and was completed in one, swift weekend afternoon. Cat head on hunky and scantily clad male body, with pope hat jauntily askew. Feathers and some zebra print --- easy, done! 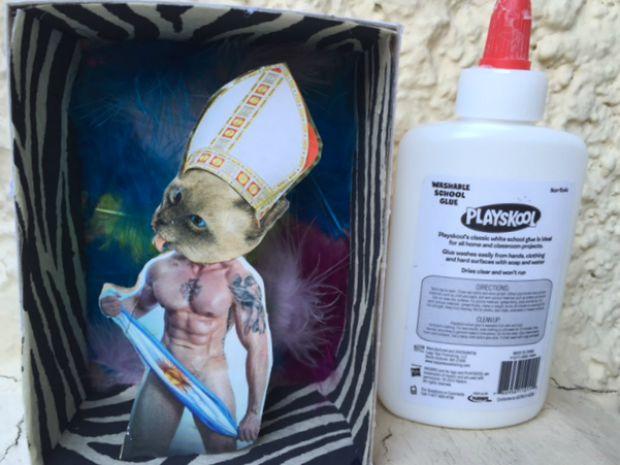 While I was making this, I was not thinking of any particular message but was rather just trying to make something that was fun and slightly uncomfortable to look at. When I started to give it more thought, I realized how much I prefer using male bodies in my art than female bodies, given that female bodies are so constantly hyper-sexualized and over-represented in media and art. Actually, in April, I was at a concert and for this one song the band had a video playing behind them. It was pretty beach scenes, and cliffs, and all that, and then just a pretty girl twirling around on the beach. There was nothing in the song to relate to this image, and it was clear the pretty girl was just another piece of scenery. So using hunky male bodies is my tiny revenge, or rather, my tiny way of giving the viewer the unexpected.

Uncompleted nativity scene! I was continuing to think of the female body as hyper-sexualized object and my friend happened to give me a coloring book of female genitalia (it pays to nurture the kinds of friendships that result in gifts of genitalia coloring books). While flipping through it, this one image clearly stood out as basically the image of the Virgin Mary. Like, I could not see anything BUT the Virgin Mary. I put up that image in my house and looked at it daily, showing it off to everyone that came over and insisting they see the Virgin too. As I spent time with it, I reflected also on feminist theology and the image became more powerful to me. 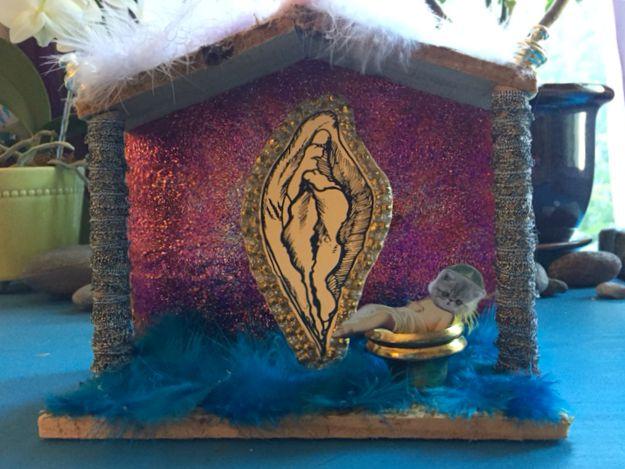 The May diorama in process
(Charis Stiles)

I found in my mess of art supplies a little nativity I had purchased from the dollar store years ago and it all started to fall into place. Glitter and feathers completed and then I found the right cat head for the tiny Jesus I found on a card from a thrift store. I initially thought I'd try to recreate the whole classic nativity scene, with three wise men and their camels and all that. 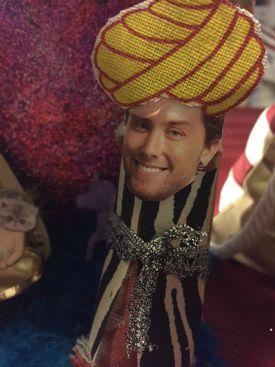 In my magazine hoard, I found some wise men to use --- Lance Bass, Tim Tebow, and Pee Wee Herman, of course --- and found in my collection pink and purple unicorns with wings to replace the camels. But sadly, it just did not work. I fashioned a turban and robes for Lance Bass out of fabric scraps and cotton balls, but he just looked ridiculous next to giant genitalia and a tiny cat Jesus. To be frank, everything I tried out in the nativity scene looked ridiculous. This one remains unfinished to this day! I keep trying out new ideas, exploring using words for the background (but what do I want to say?), strings of silver stars (couldn't get them to face the right direction), or imitation Tibetan prayer flags made out of Bible pages (that just seems like unnecessary clutter). For now, the nativity is just all-encompassing vagina-mother and baby cat Jesus.

Uncompleted Jesus Cat Yogi! Baby cat Jesus has grown up and is now a yogi! Thanks to People magazine (stolen from an Airbnb I stayed in once), I had the perfect Jared Leto image, and thanks to a cat yoga calendar from another friend, I had the perfect elements for a Jesus Yogi Cat diorama. 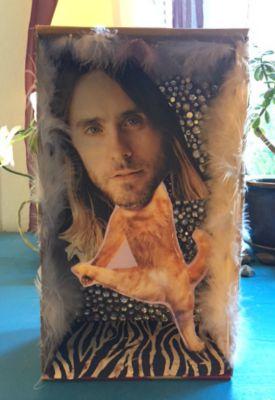 I struggled with the background for this for quite a while. At first, I wanted to make it a commentary on the financial nonsense of the yoga industry (Dollar signs for eyes? Dollar bills as the background?). Then I remembered the mythology that Jesus spent time in India when he was a young adult, explaining why Jesus' teachings are so much more similar to traditional Buddhist/Eastern religions and so different from the Old Testament. This also explains the gap in the Bible from when Jesus was a born to when he was performing miracles in his 30s to his crucifixion at 33. But this story did not lend itself well to flamboyant imagery, and I decided instead to focus on what Liberace's Heaven must look like (naturally). I needed some (or major) flamboyancy. The only problem with this plan was the labor involved --- I chose little jewels I had from the craft store but they had to be glued one by one. One by one! The rest of the background came together easily, but the jewels took several weeks to be honest. This is also one of the bigger dioramas I've done, being a larger-than-normal shoe box. It remains unfinished; it's missing something and I can't quite tell what it is. I've been sitting with this one for weeks, mostly getting lost in Jared Leto's eyes.

I'm not sure why I have had such a hard time finishing any pieces this summer. April's was easy and simple, so quick to complete, but as I've gotten into more theoretical territory or larger-scale pieces, I've been stuck. I can make many excuses, but I think deep down is the nagging thought that I'm not really an artist. That self-doubt makes decisions hard and stops the creative flow. I haven't been giving my dioramas the time they need; I have not been sitting in my living room for a few hours with all my materials around me, in the flow of creating. When I diminish myself like this, I am paralyzed and I overthink and I second guess. I am trying to push through and I'm having an easier time coming up with ideas for new pieces than I am with finishing. So for now, I'll go with that.