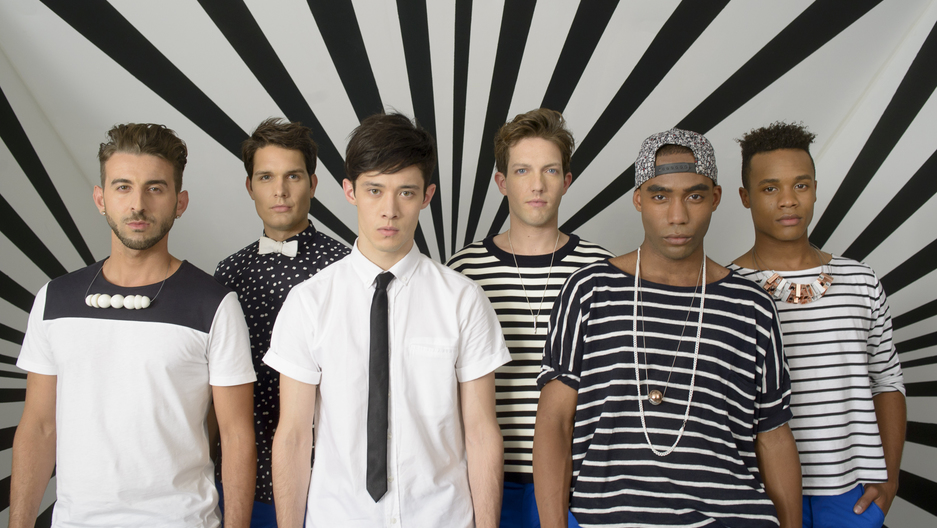 The members of EXP -- short for experiment -- are all learning to sing in Korean.

Before 2012, your average American would have struggled to name any Asian-born entertainer. That all changed with the success of Psy, who opened the floodgates for K-pop acts like BigBang and Girls Generation.

As a graduate student at Columbia, Korean-born artist, Bora Kim, couldn’t help but notice the change. Everyone suddenly knew about Korea. Well, in a way:

“The knowledge that they have around Korea, a lot of times it is based on pop culture,” Kim says. K-pop culture.

In the late 80s, Lee Soo-man, the founder of S.M. Entertainment, a Korean record label and talent agency, fell in love with American R&B singer Bobby Brown. He decided to try applying Brown’s formula — hook-driven pop and non-stop synchronized dancing — to the girl and boy bands he was developing for Korean audiences. The resulting genre — K-pop — was so successful that today companies like S.M. have become star-factories, binding minors to multi-year contracts and a grueling rehearsal schedule in order to maintain K-pop’s eerie level of perfection.

Bora Kim became fascinated by how K-pop had become such a frictionless carrier of culture. The corporate talent agencies of K-pop had hit upon a winning formula. But could that formula be distilled? Could K-pop be reverse engineered? She decided to find out. With fellow Asian-American artists Samantha Shao and Karin Kuroda, she put out a casting call in New York, looking for singers, dancers and rappers with that signature “idol look.”

“I kind of jokingly said that they have to look like ‘boyfriend material,’ you know? They should be friendly, more than just ‘oh, way over the top hot,’” Shao says.

Another thing? No Koreans.

“We didn't want to pick people who knew about K-pop too much,” Kim says, “because we wanted to document the process of the boys learning.”

They recruited six “boys” for their boy band — named EXP, for experiment. But these non-Koreans still had to sing in Korean, which meant Kim had to teach them.

“We start from [the] alphabet and we take quizzes,” she says, laughing. “Like once a week.”

They also needed to master other elusive arts of K-pop, like how to be “cute,” Kuroda explains.

“We called it a ‘cuteness workshop,’ ” she says, “explaining how in Korea or other Asian countries, cuteness is something that's desirable as opposed to demeaning.”

The team raised more than $30,000 on Kickstarter for EXP’s first mini-album, and the band’s second single is being released on August 20.

In creating their own bespoke K-pop agency, the trio is aware of the controversy surrounding Korea’s factory approach to manufacturing stardom.

“It's an industry that seeks perfection, almost at a point where you could call it problematic because, yes, it's a known fact that a lot of K-pop idols go through plastic surgery in order to look how they look,” Kim says.

But EXP isn’t about nose-jobbing your way to perfection. The trio describes it as a collaboration, with the band helping compose music and lyrics.

“It’s more like they're [the ones] always telling us, ‘girls, keep doing it and we're gonna make it.’ They're like cheerleaders,” Shao says.

Their support team also includes a host of producers, choreographers and designers who help create the killer hooks, lock-step dancing and custom-tailored costumes that are the hallmark of K-pop.

I’m a K-pop fan myself and watching EXP’s video clips, I’d say while they haven’t quite nailed it, they’re definitely within range.

If Kim and her team actually manage to bootstrap a K-pop band without the help of a multi-million dollar corporation, it would be revolutionary. But some K-pop fans accuse the team of essentially whitewashing a Korean genre. So why isn’t this A-pop?

“I think, firstly, they're singing in Korean and they're learning the K-pop culture. But more importantly, we're the makers of this band. I think that's what makes it K-pop,” Kim says.

Maybe you could call it meta K-pop.

“What is EXP?” Kuroda says. “Well, I don't frickin' know, but it's good. You just start thinking a little bit about what it is you're digesting.”

By making their process transparent, EXP heightens your awareness of the artifice of K-pop as you're enjoying it — kind of like reading the ingredients on a package of Twinkies while stuffing one in your mouth.

But the ultimate test of EXP’s success is if they can crossover — to Korea, where the cognoscenti can decide for themselves whether this is really K-pop.

“One of our famous hashtags is called #nosleeptilkorea. We would love to go there to perform,” Kim says.

Kuroda adds, “And if our boys could be on one of those variety shows, then we'll be like, We made it!”