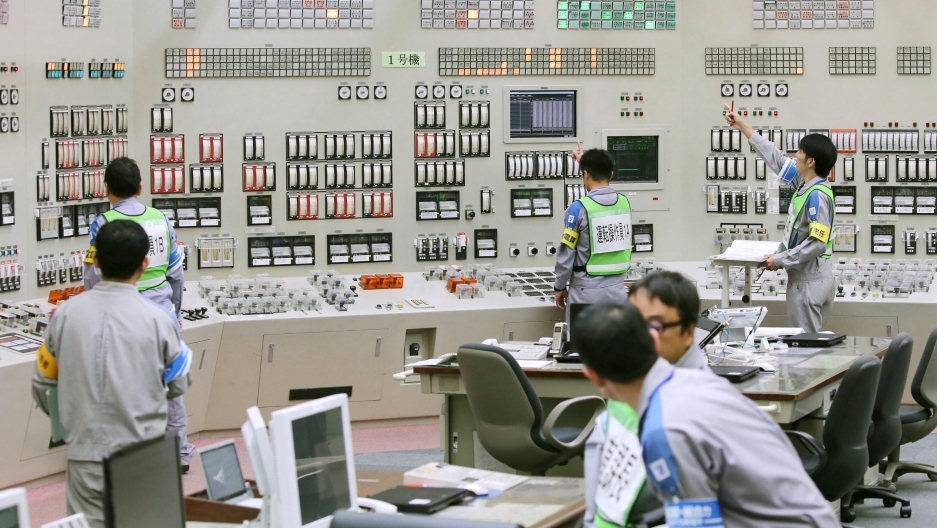 Just under a week after the first nuclear power plant re-opened in Japan, critics are voicing conerns about safety. Oh, and there's a volcano.

After the Fukushima nuclear disaster of 2011, all of Japan's nuclear reactors were shut down. To reopen, plants must pass new safety requirement. Plants must have an upgrade plan, an engineering work plan and receive pre-service inspections. These upgrade plans must include disaster preparedness — one plant in Hamaoka built a 70-foot-high, mile-long tsunami seawall in December in order to comply with the new regulations.

Reactor Sendai 1 is the first one to receive full approval, and the plant opened last Tuesday. But there are now concerns that a nearby volcano will erupt and threaten the reactor.

Japan is home to over 100 active volcanos and lies at the nexus of the North American, Eurasian and Philippine Sea tectonic plates. Earthquakes, volcanic eruptions and tsunamis are not uncommon. The Sakurajima volcano is 30 miles away from the Sendai nuclear plant, and geologists have upgraded the chances of an eruption. 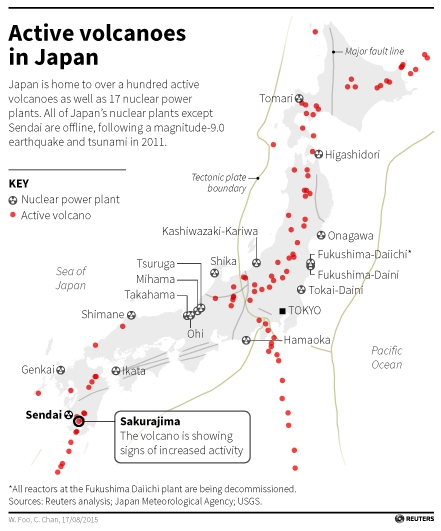 The Japan Meteorological Agency raised the warning level near Sakurajima from 3 to 4 this past week in light of tectonic plate movement. The highest level is a 5, which means necessary evacuation due to impending eruption. The Japan Times reported all 77 residents who live within a 2-mile radius of Sakurajima had been evacuated by Saturday.

The Sendai plant has not made any changes in light of the volcano warning level. "There is no impact in particular to the operations" said a Kyushu Electric spokesman, according to Reuters. "We will continue to pay close attention to information from the Japan Meteorological Agency."

Japan's Nuclear Regulation Authority fully approved the Sendai 1 reactor on July 3. But just the month before, the authority had to redo parts of the pre-service inspections after it discovered "numerous incomplete documents and erroneous written entries."

In April there were attempts to bring a case to the local district court with safety concerns about the plant. The suit was rejected. There have been protests to the reopening of this plant and others outside the Sendai plant and the prime minister's residence in Tokyo. One protest even featured former prime minister Naoto Kan, who led the country in 2011 during the Fukushima crisis.

But Japan's government has bold plans to rely on 20-22 percent nuclear energy by 2030, and is looking to re-open many of the closed plants and more.

Japan's Nuclear Energy Institute states that as the last plants were closing In 2013, nuclear power accounted for 1.7 percent of the country's energy. Most of the energy came from natural gas, coal, and oil. But Japan has to import all these sources, and has had to rely even heavier on imports. Prices for energy inside Japan have therefore soared since 2013 — big suppliers KEPCO and Hokkaido Electric Power Co. had to hike their prices twice.

"Japan is an export machine. So it requires incredible amounts of electricity," Dr. David Bonilla, a research fellow at the Oxford Martin school, told PRI. "It has a very complex manufacturing industry. Probably more manufacturing sectors than the US economy. They require cheap electricity. That can only be done with nuclear power."

The closing of the nuclear plants also cut an important source of revenue inside Japan. The Japan Atomic Industrial Forum said each deactivated reactor would cost $3.33 million per year. Some municipalities are especially dependent — almost 70 percent of revenue in the southern town of Genkai comes from nuclear power production. This July a national organization of municipalities with power plants asked the national government to take measures to reimburse them for tax revenues lost from decomissioned reactors.

Lots of hopes are pinned on the Sendai plant.  "I think the general consensus among the political elites in Japan is pro-nuclear," said Bonilla. "The Liberal Democratic Party has been in power for decades and has been very close to the development of nuclear industry. It was basically one of the engineers of the japanese economic growth miracle. Nuclear power was very much part of the economic formula. But that came to an end eventually in the early 2000s. And there was a political movement which was more grass-roots, which had a different message, and this is why you have these protests."

Well, that and the Fukushima disaster in 2011.

The Sendai plant began producing energy on Friday. It may take until Wedneday for the reactor to reach its full potential of 890,000 kilowatts. Closing the plant now would set this production back at least a week. A second reactor in the Sendai plant is expected to be activated in the coming months, and 20 more reactors are in the process of inspection and reactivation.

"It is a dilemna for Japan and there is no clear solution," said Bonilla, "They need the energy and they need it now. They want an independent energy policy but at the same time people are asking questions about a non-nuclear option. They're talking about having a more renewable energy mix. And that's a very difficult thing to achieve in a few years."