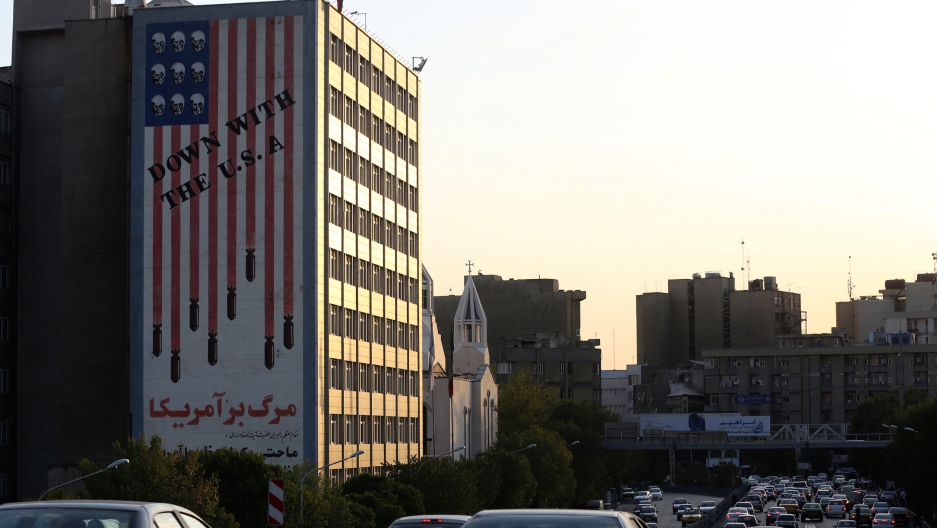 Graffiti with anti-US slogan is seen decorating the wall of a building in Tehran on July 14, 2015.
Credit: Atta Kenare
Share

TEHRAN, Iran — At Friday prayers and political rallies, hardline Iranians continue to shout "death to America," as they have for decades. That chant is cited by conservative US politicians as proof that Iran remains hostile to the US and can't be trusted to implement the Vienna nuclear accords.

Last month in Vienna the US and Iran agreed to unprecedented inspections of Iran's nuclear facilities in return for lifting sanctions that have badly damaged Iran's economy.

However, US conservatives cast doubt on Iranian leaders' intentions.

“When someone chants, 'Yes, certainly, death to America,' we should take him at his word, and we shouldn’t put him on the path to a nuclear bomb,” Senator Tom Cotton (R-Ark), a leading opponent of the agreement, said about Iran's Supreme Leader Ali Khamenei.

But Iranians have a different interpretation of the slogan.

"Death to America" expresses the anger many Iranians feel about US policy toward Iran, according to Foad Izadi, an assistant professor in the Faculty of World Studies at the University of Tehran. Iranians well remember that the US overthrew the legitimate government of Mohammad Mossadegh in 1953 and supported the dictatorial Shah who followed.

The slogan "means death to American foreign policy," said Izadi. Iranians "have problems with the American government, not the American people." In fact, he says, Iranians are famously friendly to Americans. "When you walk around town, and people see you're an American, everyone wants to take care of you."

Those two sharply different understandings of the chant parallel a wider disagreement between Iran and the US over foreign policy in the Middle East. The US sees Iran as an aggressive power, supporting terrorism in the region. Iran calls the US a superpower that threatens military attacks on Iran and its allies.

Even if legislative bodies in the US and Iran vote to accept the agreement, clashes in the region are likely to continue, according to numerous Iranian sources.

"The only way we have is resistance against world powers"

Officially, Iranian leaders say US-Iran cooperation on the Vienna accords could lead to resolving other conflicts.

"If everything goes smooth, then it creates dynamism out of which many things could happen," said Mostafa Zahrani, director general of the Institute for Political and International Studies, a Foreign Ministry think tank.

But that cooperation comes with a long list of caveats.

Izadi says Iranian leaders fundamentally distrust US policy in the region, citing the Afghanistan War, the occupation of Iraq and current US support for Saudi Arabia's bombing of Yemen.

"These are serious mistakes," he said. "Iran thinks this part of the world is on fire because of US foreign policy."

More from GlobalPost: Iran's Jewish community gets behind nuclear deal with the US

Iran is unlikely to change its support for Syria's Bashar al-Assad and the Lebanese group Hezbollah whether or not sanctions are lifted. Some US critics of the Vienna accords claim ending sanctions could free up $150 billion in Iranian assets, which could then be used to fund Hezbollah and other Iranian allies.

Iran's central bank leaders say Iran has an estimated $130 billion being held abroad due to sanctions. But it will be able to repatriate only about $29 billion because of previous agreements to purchase goods and pay for infrastructure projects.

Iran has supported Hezbollah since its founding in the early 1980s, notes Izadi. "That policy isn't going to change."

Analysts point out two possible areas of US-Iran cooperation: Syria and Iraq. But the prospects don't look good at the moment.

Iranian Foreign Minister Mohammad Javad Zarif traveled to Lebanon and Syria recently to discuss Iran's peace plan, which would keep Assad in power pending peace talks with non-extremist rebels and internationally supervised elections. To date the US has expressed no interest in the plan.

The US continues to fault Iran for backing Assad while Iran blames the US for allowing its allies Saudi Arabia and Turkey to arm extremist groups such as the Al Qaeda-affiliated Al Nusra Front and the Islamic State.

"The US closes its eyes to the actions of the Saudis," said Sayed Mohammad Marandi, an assistant professor at the University of Tehran. "Ultimately there's going to be blowback." 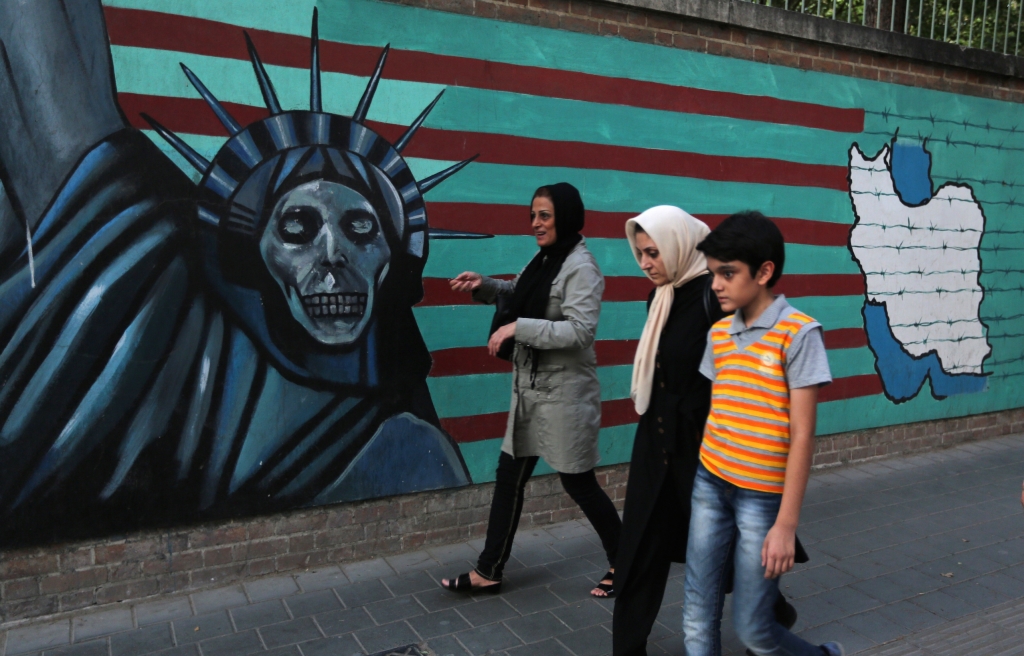 An Iranian family walks past anti-US graffiti on the wall of the former US embassy in Tehran on July 14, 2015.

In Iraq, a de facto alliance exists because both Iran and the US are waging war against the Islamic State, says Professor Izadi. He doubts, however, that Iran will accept a formal alliance.

Iranian leaders "don't want to be seen as cooperating or collaborating with the US," said Izadi. "The US image in this part of the world is quite negative."

The level of US-Iran hostility was revealed when Abbas Araghchi, Iran’s chief negotiator in Vienna, gave an off-the-record talk to the Islamic Republic of Iran Broadcasting. The comments were briefly published online before being pulled down.

“People should not get the feeling that America is now our friend and that enmities are a thing of the past," said Araghchi. "This is definitely not the case. Our enmity against the US, and their enmity towards us, is not over. We have managed and solved just one bilateral issue."

More from GlobalPost: What Americans have been missing out on in Iran

Araghchi and other Iranian leaders are committed to implementing the Vienna accords, according to Izadi and other experts.

That irks Ruhollah Hosseinian, a conservative member of Iran's parliament, and a leading opponent of the nuclear agreement. His views parallel those of American critics of the accord, only in mirror image.

Hosseinian says the accords won't allow Iran to produce enough nuclear fuel to run its one nuclear power plant, and that they'll allow the US to spy on Iran's military bases under the guise of inspections.

While Khamenei has not formally endorsed the Vienna accords, and is unlikely to do so until after the US Congressional vote in September, he has praised the nuclear accord negotiators.

Hosseinian and other conservatives plan to vote against the Vienna accords in parliament, saying Iran can survive US sanctions.

"We've shown that in a worst case scenario we can manage the country during the years of sanctions," he said. "The only way we have is resistance against world powers."

An opinion poll shows that 57 percent of Iranians support the Vienna accords. The administration of President Hassan Rouhani intends to carry out the agreement, according to Iranian experts.

GlobalPost Special Correspondent Reese Erlich received a grant for his Iran reporting from the Pulitzer Center on Crisis Reporting. His latest book is “Inside Syria: The Back Story of Their Civil War and What the World Can Expect.”