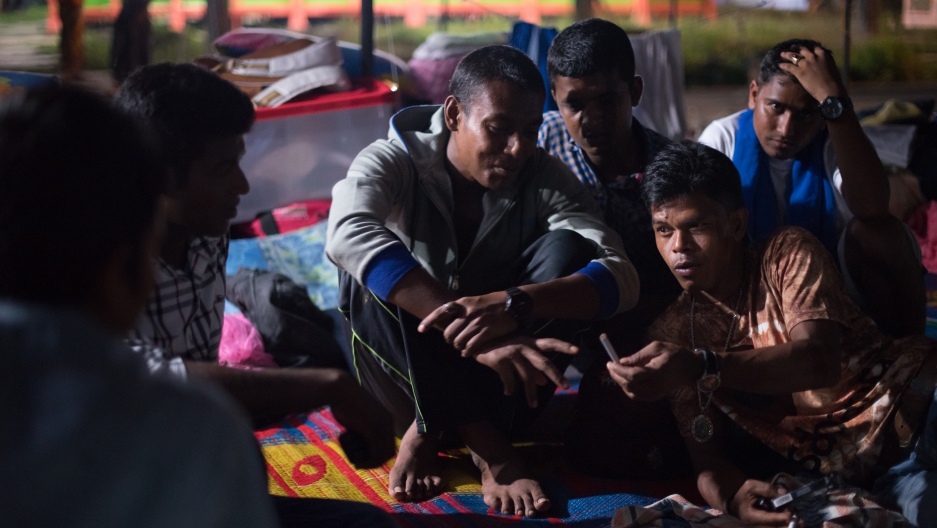 Taufik (bottom right) is a fisherman who saved the Rohingya and Bangladeshi from sea in May. Even though they aren’t real family, he says, he loves them and he feels a responsibility to take care of them. He visits the Bayeun, East Aceh, Indonesia refugee camp on July 19, 2015.

Refugees are not always met with open arms, but when some 1,800 Bangladeshi and Rohingya migrants came ashore in the Indonesian province of Aceh three months ago, villagers brought them food and clean clothes. The popular singer Rafly even held a welcoming concert.

In fact, Rafly, who is also a lawmaker, has been lobbying colleagues in Jakarta to let them stay.

“We have a lot of land, our people care, we have enough natural resources,” he says. “There is no reason to send our brothers and sisters back.”

The migrants captured the world’s attention in May when local governments adopted a “push back” policy, giving them fuel and provisions but rebuffing their efforts to come ashore. Eventually, fishermen from Aceh province rescued hundreds of them from cramped and filthy boats. Some were treated for starvation.

The Indonesian government has agreed to host the migrants for just one year, as long as the international community helps foot the bill and resettles them elsewhere. The Bangladeshis were mostly economic migrants. Some have already been sent home. But the Rohingya, a Muslim ethnic minority from Myanmar, are fleeing persecution. Myanmar won’t take them back and it’s unclear where they will go.

“On the first day, they were traumatized. We tried to get close to communicate, but they moved further away,” says Fardan Rezeki, a villager in Bayeun — a sleepy Acehnese town of rice paddies and stray cats. About 400 refugees are housed in an abandoned paper factory here. 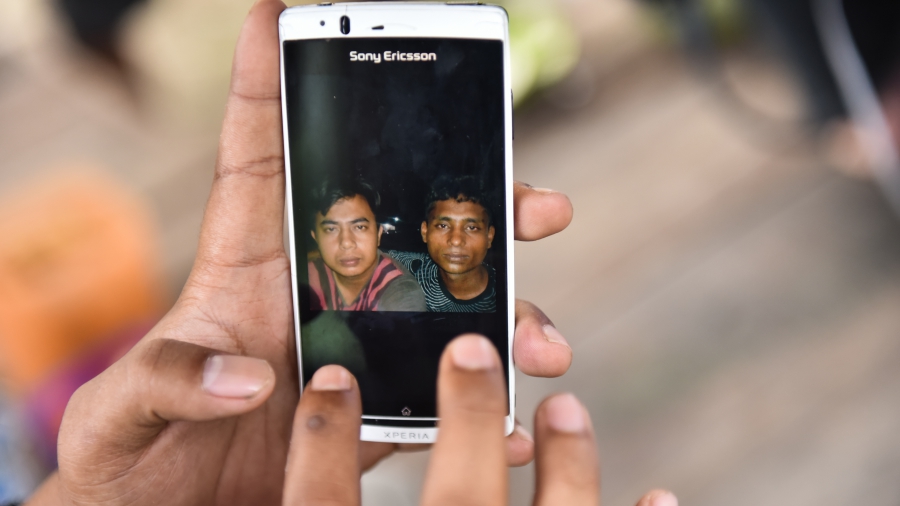 Fardan Rezeky shows pictures on his phone of friends he’s made in the Rohingya and Bangladeshi refugee camp in Bayeun, on July 19, 2015. Rezeky was there in May when the refugees arrived. He felt a call to help them, as many other countries helped Aceh after the 2004 tsunami.

Fardan swiped through selfies on his mobile phone — pictures of friends he’s made inside the camp.

“I feel solidarity with them because as fellow Muslims they create a desire to be generous towards them in our own heart,” he says. Indonesia has a large Muslim majority and Aceh has embraced a version of sharia law.

Others point to the disastrous 2004 tsunami as a factor in Aceh’s warm response to the refugees. Aceh’s capital took a direct hit. So many lives were lost the tsunami has become a bookmark in time.

“The tsunami was one moment when we saw all humans cared,” says Rafly, the lawmaker, of the international aid that flowed in. Now, he says, it’s the Acehnese who are in a position to help. 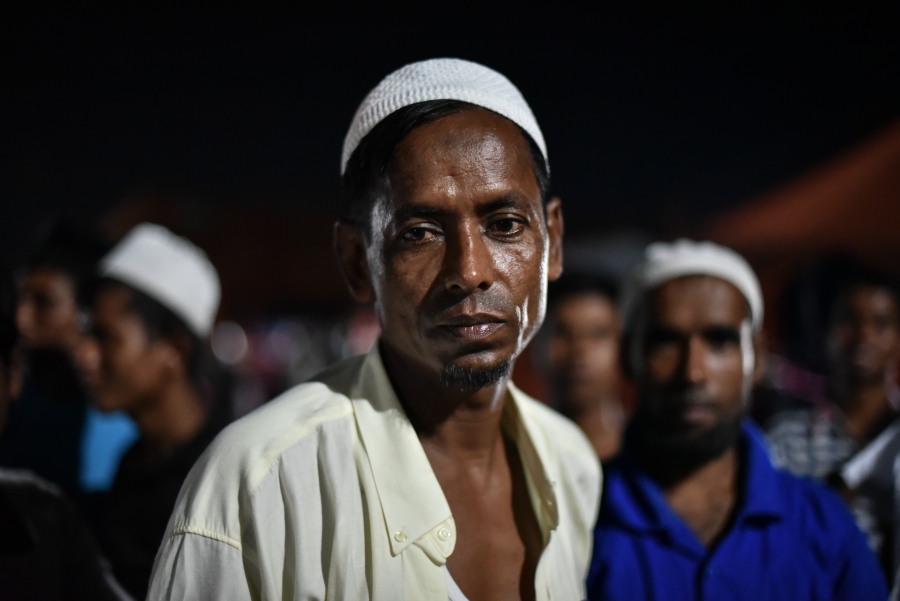 Sahi Dullah is a Rohingya refugee living in a camp in Bayeun, East Aceh, Indonesia. He was a shopkeeper back in Myanmar before he journeyed by boat with other Rohingya and Bangladeshi with Malaysia as their destination.

Lilianne Fan, international director of the Geutanyoe Foundation for Aceh, which operates in all four of the province’s refugee camps, says it was unlikely humanitarian groups would be able to find new homes for the Rohingya within the one-year time limit.

“In the current context, there are enormous numbers of refugees, more than we’ve seen since the end of World War II,” she says. “There is political sentiment in many countries as well that they don’t want to see enormous numbers of migrants and refugees coming to their countries, so it’s not an easy time.”

Even if the Indonesian government decides to let the Rohingya stay, that may not be what all the Rohingya want.

One of the refugees, Sahi Dulleh, was a shopkeeper back in Myanmar. His six children are still there. He says the Acehnese have been generous, but he’s desperate to continue on to his original destination, Malaysia, where even menial jobs pay much more than in Aceh.

In fact, some of the Rohingya already have family in Malaysia. A handful of refugees have snuck out of the camp, presumably to try their luck once again at the hands of human smugglers.

That’s heartbreaking news for people like Taufik Arrahman, one of the fishermen who helped rescue the Rohingya. He visited the camp recently to celebrate the end of Ramadan. 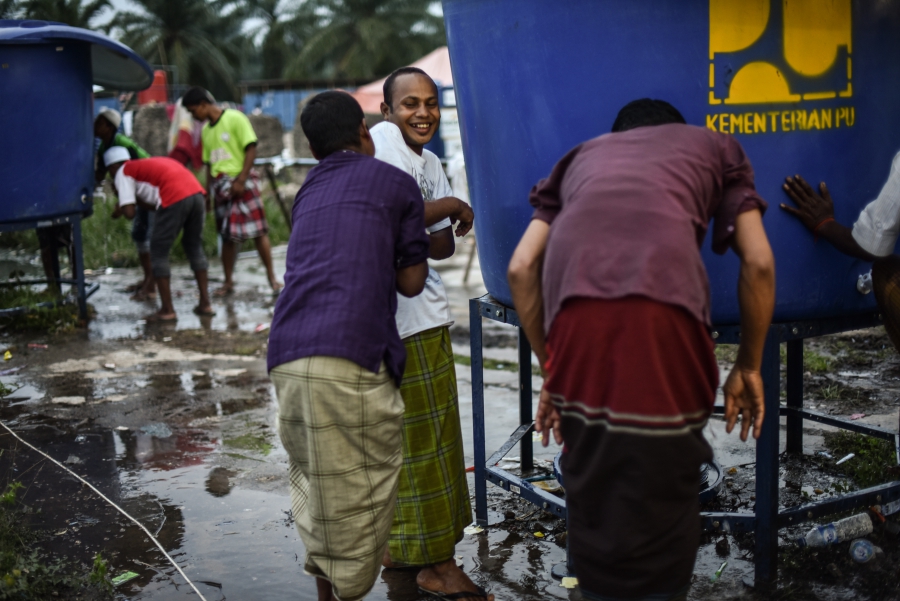 “I love them. They are not my blood relatives, but they are all inside my heart,” he says. “They and I, we are one soul.”

As he spoke, the evening call to prayer came over a scratchy speaker system. Taufik joined the men at a portable water tank where they washed their hands and face and feet.

Then they filed into a room on wooden stilts to pray.

Ruth Morris and Carey Wagner reported from Indonesia on fellowships from the International Reporting Project.