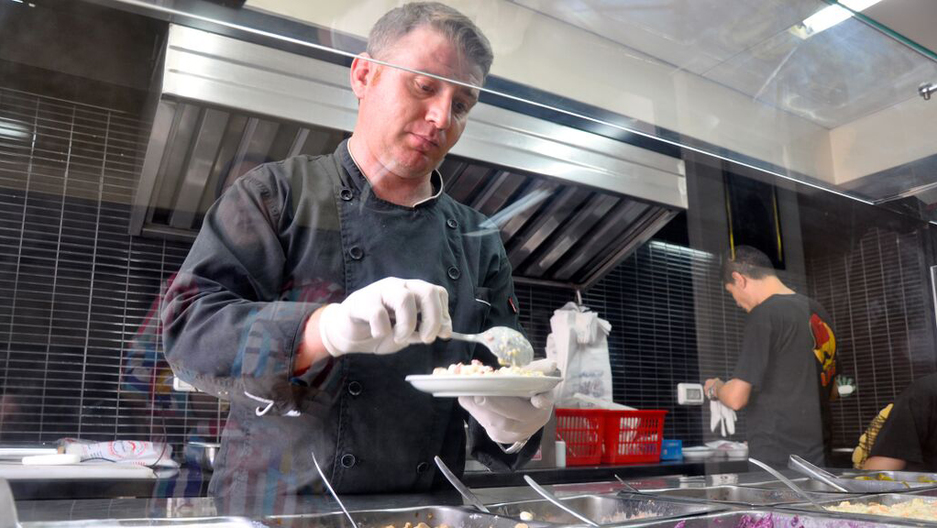 When Wareef Kassem Hamedo was growing up in the Syrian city of Aleppo, he dreamt of opening his own restaurant. The city, famed for its mouth-watering culinary traditions, was a gastronomic playground perfect for a man who believes that “food isn’t just food, it has a soul.”

Last fall, Wareef’s dream finally came true when the 35-year-old opened Soriana (Our Syria). But the narrow, bustling two-floor restaurant sits not in his hometown, but in another of the most war-torn places in the world: the Gaza Strip.

“If you had told me when I was younger that I’d start a home and restaurant in Gaza, I’d laugh,” he says, grinning with a piece of chicken wedged between his teeth on a blistering summer afternoon in Gaza City. “Life is uncertain. The journey always surprises you.”

It’s been a wayward one for the chef, even before signs of unrest in Syria eventually forced him — and nearly 11 million others — to leave their homes. The petite, red-headed foodie earned a degree in mechanical engineering to please his father “like a good Syrian son,” but continued to work in restaurants, always believing that he’d one day have his own.

When anti-government protests swept Syria in 2011, he never thought they’d devolve into a civil war that would claim more than 200,000 lives and displace more than half the country’s population. But he knew it was time to leave — a reality he long refused to accept — when his neighbors were killed and his own home was damaged from nearby shelling.

“There was no food, no electricity,” he recalls, speaking only in past tense when talking about his country. “At some point, you have to make a decision even when it’s impossible.”

Three years ago, Hamedo fled restive Aleppo to Turkey, traveling mostly by foot. Not long after, a friend told him about a job opening at a restaurant in Cairo. So he set off on another voyage, this time 44 hours by sea, to Egypt.

But after eight months in Cairo, rising anti-Syrian sentiment and poor working conditions in Cairo meant Wareef had to move on. He weighed his two remaining options: He could pay a smuggler to take him to Europe by boat, an often-perilous journey, or he could go to Gaza, where a Palestinian friend offered him a job at a restaurant.

He rolled the jagged dice and decided to move to a place he only knew through headlines of death and destruction. In May 2013, he entered the Philadelphia-sized territory through one of the smuggling tunnels between Egypt and Gaza.

“People thought I was crazy,” he said, his co-workers chuckling in the small kitchen behind him as he recounted his cinematic timeline. Wareef didn’t tell his family — many of whom are now refugees in Turkey — he was in Gaza until four months after he arrived. “I didn’t want them to worry ... I was leaving one war zone for another.”

Indeed, life is anything but a refuge in Gaza, where unemployment is at 43 percent — the highest in the world — and almost 80 percent of the population depends on aid. Leaving is a privilege for the few who are able to obtain the necessary permits to travel through the territory’s tightly controlled borders. A year after last summer’s 50-day war, in which 2,000 Palestinians and 70 Israelis were killed, infrastructure and lives are still caught in the balance.

Wareef doesn’t know when or if he will see his own family again. His Syrian passport expired and renewing it at a Syrian embassy or consulate isn’t an option in Gaza. Nor is leaving. He’s doubly sieged, he says.

So for now, he settles on reminders of Syria through his food and the charcoal sketches of Aleppo that adorn the walls of his restaurant. For many Gazans who complain of a mundane day-to-day existence, bereft of variety or novelty, Soriana is an exotic retreat. It’s a step inside the home of a cousin they’ve never been able to meet.

“We always heard of Syrian kibbeh, but never ate it,” said 28-year-old Ahmed Sedki, who stopped in for a quick bite. The dish of minced beef or lamb and burghul wheat has become Hamedo’s speciality. “We like his style. He’s not Gazan, but we feel close to him.”

Inspired by their enthusiasm for different food, the charismatic chef launched a cooking show called “Chef Wareef” on local TV to teach Gazans how to make favorites from Aleppo and abroad (his crepes are in high demand). The five-minute tutorials aired every day during the Muslim holy month of Ramadan and Hamedo hopes to extend the series into a full-length program. His Facebook fan page, chock-full of recipes and photographs of rolling tables of food and cleverly sculpted watermelons, already has more than 11,000 likes.

Beyond his culinary achievements, Wareef reached another milestone in Gaza: He found love at first sight.

“You know it when you see it,” he says, his cheeks flushed and eyes resolute. He met Maha Abualkass, a Gazan journalist, when she interviewed him for a story on Syrian refugees. (He says she’s also a good cook.) “I didn’t think I would find love in Gaza ... but it’s a blessing after so much suffering.”

They married a month and a half before last summer’s war. He stayed by her side as she ran to cover harrowing scenes that have become all too familiar for both of them.

“It was like Syria,” he says, smoothing the edges of his black double-breasted chef’s coat. “Except in Syria, it’s even worse. There are no cameras.”

Still, Hamedo finds solace in a cuisine that has been both his anchor and lifeboat.

“I know I'm lucky, unlike so many others,” he says, wiping beads of sweat from his brow. The lunch crowd would soon trickle in, waiting to be served by the celebrity chef who has become one of their own. “But I will truly achieve my dreams when I open Soriana back in Aleppo. That's the hope every day. It never goes away. That's the dream.”

He sat silently for a minute, his eyes vaguely moist from chopped onions nearby or memories far away or both. A customer gently tapped on his shoulder, waking him from a stolen daydream.

“You are Chef Hamedo, right?” the Gazan asked with a jolt of discovery. Hamedo lifted his shoulders instantly and nodded.

“Nice to meet you,” the man beamed. “You are always welcome in Gaza."

Dalia Mortada is The GroundTruth Project's 2015 Middle East fellow and Lauren Bohn is GroundTruth's Middle East correspondent. This story was produced by part a series called "Syrian Kitchens" about the diaspora of Syrian refugees who have fled the country's civil war. 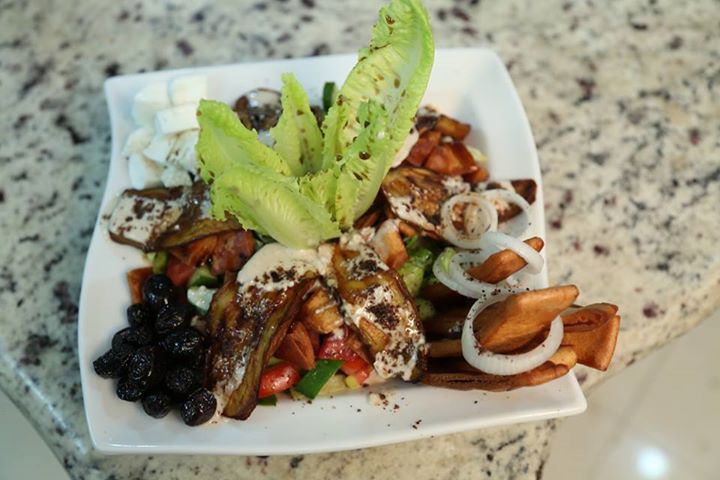 Here Chef Wareef teaches home cooks to make an Aleppo favorite: juicy, tomato-infused kebabs called Kebab Al-Khashkhash. He adjusted the recipe so that people could make it at home in the oven, as opposed to the usual way of cooking it over the grill (gets good about a minute in).