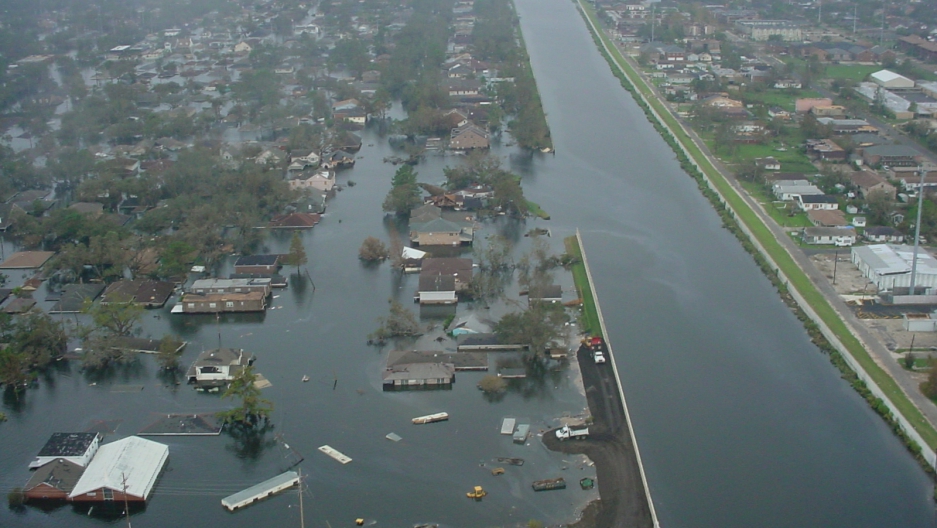 Mark Schleifstein wrote the book on Hurricane Katrina — before it ever happened. As a reporter for NOLA.com/The Times-Picayune in New Orleans, he published a series of articles in 2002 that basically predicted the devastation that would unfold should a storm of that power hit the city.

He's been on the hurricane and environment beat ever since, including sharing in Pulitzer Prizes his paper won for coverage of the aftermath of Katrina.

Learn about how climate change may impact future floods.

Marco Werman: Why did Hurricane Katrina cause such catastrophe in New Orleans in 2005? Remind us what happened.

Mark Schleifstein: There was a series of failures of structures and earthen levees around the city that were improperly designed or improperly built by the Army Corps of Engineers. In some cases they were actually overtopped and eroded away to nothing, but in other cases water came up the canals and the walls just failed along those canals. About 80 percent of the city flooded.

MW: Where were you during the storm?

MS: Our staff actually took shelter in our old building, the Times-Picayune building. My house was on the lakefront in the Lakeview community and ended up with about 15 feet of water in it.

MW: What would happen if a similar storm hit today?

MS: A similar storm today would still be too large for the new levee system that's been put in place. After Katrina, the federal government, the Army Corps of Engineers and the National Flood Insurance Program came to an agreement that they would rebuild the levee system to withstand a storm surge flood that the flood insurance program covers, which is one that has a one percent chance of occurring in any year, the so-called 100-year storm. Katrina was a 400-year storm the way it hit the Mississippi Gulf Coast and a 250-year storm the way it hit the eastern New Orleans area and about a 150-year storm the way it hit the lakefront. So you'd still have overtopping of the levee system. The significant difference would be that the levees have been designed so they don't disappear when the storm hits. That will reduce the kind of flooding that would occur even if you had a Katrina-like storm.

MS: There’s a better understanding of the kinds of forces that are possible. That resulted in the levee system being built much stronger than it was before Katrina, even though I still think it's not high enough. But it's been a dramatic improvement.

MW: Why are the levees not high enough?

MS: Because there is still another Katrina out there and the population and investment in New Orleans is such that you can't just move the city. We're talking $200 to $300 billion in the metro area that would have to be moved somewhere. The reason that New Orleans exists is because of its location. It's a major port, one of the top five in the nation, and we provide a variety of different opportunities for seafood, for the oil and gas industry, and of course for entertainment and a destination for tourism.

MW: So the 100-year standard is a weak standard?

MS: The 100-year-standard is a weak standard. The state recognizes that, which is why, in their own master plan for coastal restoration and protection, their standard is 500 years. They're moving slowly to get to that. There is a recognition that coastal erosion is a major problem as a result of sea level rise and local subsidence, with subsidence being the bigger one of the issues there. That plan is a 50-year, $50 billion program that the state, now with money from the BP settlement, will have an opportunity to really pour money into — at least in the first 15 years.

MW: There’s a lot more awareness now about the dangers posed by storms and rising seas. What do you think is the biggest lesson from Katrina and New Orleans for other cities?

MS: The first one is that the local governments and the local people should rely on themselves when they're faced with a major catastrophe like Katrina and should do things for themselves, rather than waiting for the federal government to come help them out. The second is the broader issue of how do we deal with rising seas and changing weather and what that means to our infrastructure. The city of New Orleans has a leg up on everyone else because of the money that was poured in after Katrina. We have this new 100-year levee system, which the city and the state will be able to build upon. Other communities don't have that. Look at Miami Beach; its roads are flooding every time there's a high tide. That's a real problem, and affects a much larger population and it's something the entire East Coast is going to have to live with and places like Houston as well.

MW: What decisions lie ahead for New Orleans?

MS: The biggest one is going to be finding long-term sources of money to pay for both the coastal restoration program and to improve the levee system and figure out new ways of protecting New Orleans from sea level rise and subsidence. There are major efforts underway, but finding the money to pay for them is going to be a problem in the future.

The marshes that are in front of the levees act as buffers for the storm surge and reduce its height. In some places the plan is to rebuild Cypress-Tupelo forests that reduce the height and intensity of water as it comes in. As those things are placed back, it helps limit the risk that the levees have from storm surge. Those same sorts of ideas are being considered for the city of New York, which is looking at building wetlands around the lower end of Manhattan.

MW: What has been the psychic toll on you Mark?

MS: That's a good question. I have been sort of using my time in the last 10 years trying to teach people lessons from Katrina, while at the same time trying to keep track of what's going on with the Corps of Engineers as it rebuilds the levee system, and with the state as it dealt with coastal restoration. I guess you could say I've been fortunate in being too busy to step back and say ‘Oh my gosh, what the heck happened to me?’ The reality was that there was one day when I did crawl back into my house a couple of weeks after the storm, the first time I was able to get back in and look around. You know it was a punch to the stomach to see the devastation. I had to go back out and sit on my porch and take stock for a while. And then I went back in and started doing what we needed to do which was take the next steps and move forward with our lives.

MW: How long can we expect New Orleans to be around?

MS: That really is a good question. It’s not just the money, but the intensity of sea-level rise that are the two problems we're still facing. We're going to know that answer probably at the end of the next 50 years as we figure out whether or not the coastal restoration efforts and sea level rise are able to keep each other at bay. If that works, the city has a long future. If it doesn't work, you're going to end up with a walled city, with the walls being built higher and higher until it does become economically unfeasible to live here. We just don't know. But it's the future and we're not alone in facing that future. There are communities all over the United States dealing with it, and all over the world. You could say a billion or more people are facing a similar sort of concern. It looks like a long time off, but it really is the near future: 50 to 100 years.

This story is part of PRI's ongoing coverage of stories of building resilience amid crisis — and building the strength to prevail.