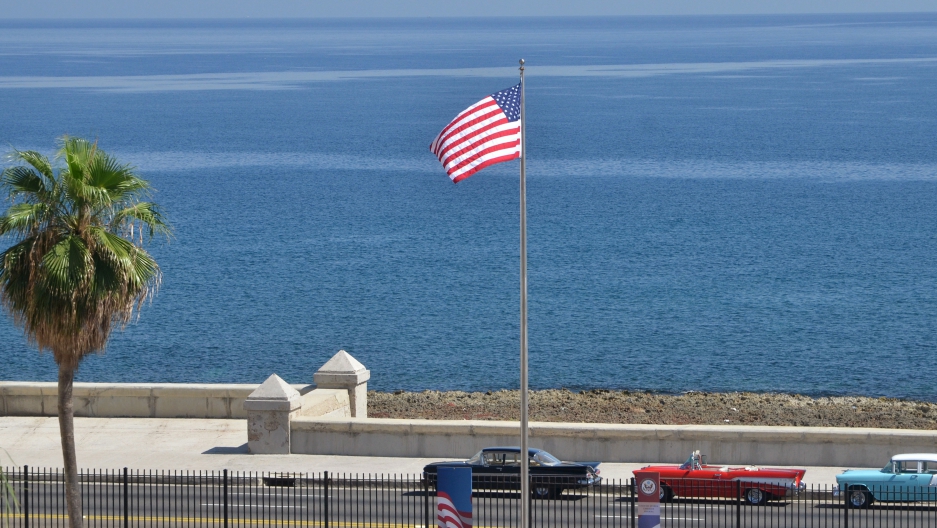 The US flag flies at the US Embassy in Havana, Cuba, August 14, 2015. Watched over by US Secretary of State John Kerry, Marines raised the flag at the embassy in Cuba for the first time in 54 years on Friday, symbolically ushering in an era of renewed diplomatic relations between the two Cold War-era foes.

More than a half century after the US flag was taken down from the US Embassy in Cuba, the stars and stripes are flying high again in Havana.

It was ceremony full of symbolism Friday morning as Larry Morris, James Tracy and Mike East, the three Marines who had taken the American flag down from the embassy in 1961 were on hand to assist in putting it back.

John Kerry, the first American Secretary of State to set foot on the island since 1945, reminisced in his speech about the Cuba he remembered as a child. “I was a 17-year-old kid watching on a black and white television set when I first heard an American president talk of Cuba as an 'imprisoned island.'”

The BBC’s Will Grant, who was on hand for the ceremony, says while the ceremony was certainly festive it didn’t erase the many issues between the two countries such as the US economic embargo, the US military presence at Guantanamo Bay, the role of dissidents, the role of political opposition, increased access to the Internet, human rights issues and more.

“There are many, many things that these two nations don’t see eye to eye on, nor probably ever will — but what this now means and what the Cuban Embassy in Washington, DC, now means is that they now can have a serious and comprehensive proper discussion ... rather than through backchannels or bickering or with diplomatic steps that are retrograde. All the sorts of things that typified the past hopefully, have now been consigned to the past,” says Grant.

Cuban dissident Antonio Rodiles is not holding his breath.  "In the last month, the repression has been increasing against the opposition and against human rights activists." Rodiles says the political legitimacy bestowed on Cuba because of the rapprochment with the United States is actually making dissidents' lives worse.

Last month Rodiles says he was beaten up by Cuban security forces. "I don't know why some people think that the Cuban government is going to change if we have exactly the same people who have been in power for almost 60 years."

Cuban dissidents and human rights activists were barred from attending today's flag raising. And Rodiles declined Secretary Kerry's invitation to meet with opponents of the Castro regime separately at the US embassy in Havana. "We decided to decline because we were asking to have a kind of meeting with Secretary of State Kerry to talk about how we see this process. But they said there wasn't enough time so we decided to decline the invitation."

If he did have the ear of Secretary Kerry, this is what he'd have said: "The [Cuban] government is feeling more relaxed to repress us because they are completely focused on transferring power to their families and political allies. And I think they are getting more freedom to do that."

Rodiles says the United States should have asked for preconditions before re-establishing relations with Havana. He wants the US and the rest of the international community now to put pressure on the Cuban government to ratify the International Covenant on Civil and Political Rights. He says that without making demands on Cuba, the situation is going to get worse for Cuban citizens.