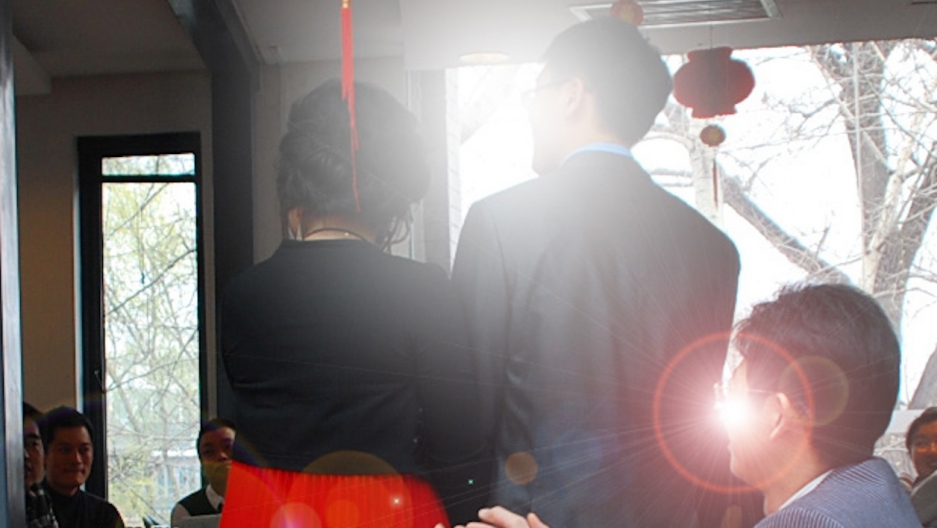 William and Andi at their wedding ceremony. They chose not to have a marriage certificate, so they don't have legal obligations to one another.
Credit: Andi
Share

BEIJING, China — William and Andi, husband and wife of four years, hadn’t seen each other for months. Andi arrived at William’s apartment sweaty from a bicycle ride through the Beijing summer haze. William brought her some cold lemon water and handed her a towel. She said he should boil the water first because tap water isn’t clean, and teased him for having grown so muscular his legs looked as bulky as “chicken drum sticks.” He suggested tweaking her gym routine so that it would be easier to fit exercise into her schedule. Reclining on separate couches in William’s spacious living room, they chatted comfortably about work, family and mutual friends.

After several minutes of small talk, conversation quickly turns to whether they should reconsider having children. Andi is 33, which in China is considered old to be childless. William is 36 and works as a human resources manager at a large state-owned company. In addition to pleasing his parents, he thinks having a child would help him at work because his superiors would see him as a family man — and therefore, in the traditional mindset here, a better candidate for promotions. Andi, on the other hand, admits she has a personal desire to become a mother.

“Why should we have kids anyway?” Andi asks.

“But where would we raise them? Would I have to move in with you? When would we tell them the truth?” Andi says, shaking her head.

Andi has thick, shoulder-length hair and wears flowing, colorful clothes. She works as a graphic designer and has lived in Beijing with her girlfriend for 10 years. William, meanwhile, has focused on building his career over finding a steady boyfriend. They are both Chinese citizens and, like most of my other interview subjects, chose to give only their English names for this article because they are not openly gay.

The two are in what China’s LGBT community has coined a “cooperative marriage” (“xinghun”), which is essentially a fake marriage between a gay man and a lesbian woman. 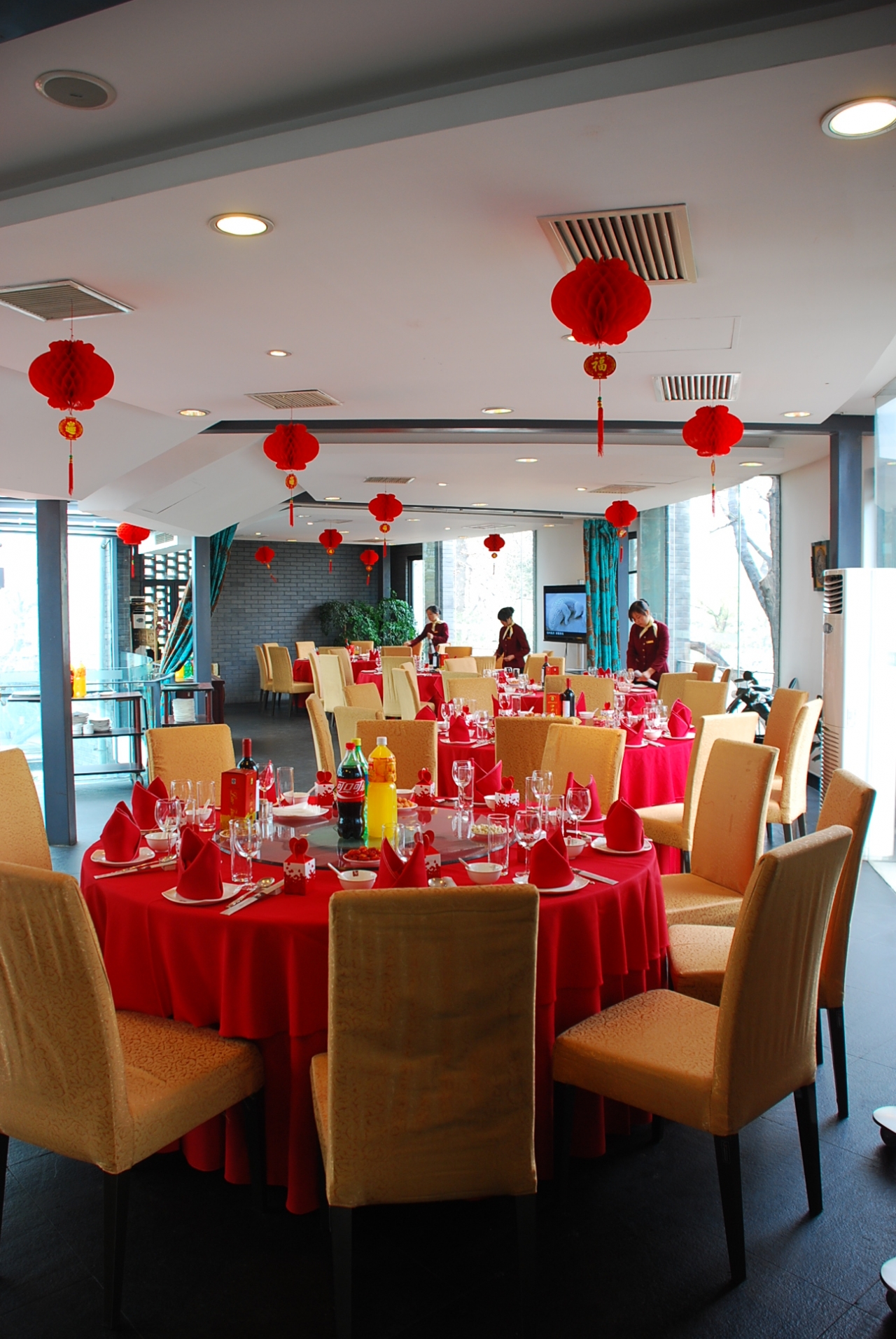 The reception room at William and Andi's wedding.

Homosexuality was classified as a mental illness in the country until 2001 and a crime until 1997. In a largely conservative society where everyone feels pressure to get married and gay men and lesbians still face serious discrimination, most LGBT people choose to lead double lives.

On April 13 a judge in China ruled on the first same-sex marriage case ever heard in the country, finding that the plaintiff could not marry his male partner because the law only allows marriage between a man and woman. The ruling is expected to be appealed.

Out of an estimated 20 million gay men in the country, around 80 percent are in fake marriages, according to research from Qingdao University. Most marry straight spouses, often without first revealing their true sexual orientation to their partner.

But an increasing number of gay men and lesbians are choosing to marry each other. They believe this option is better because it isn’t hurtful to straight spouses and also gives them much more freedom to live open lives. Most cooperative marriage partners do not live with each other after the wedding. Instead, some maintain a shared home to host visiting relatives and others leave their belongings in each other’s apartments to make it appear as if they are co-habitating.

"When we go home to visit my parents, I think they are suspicious," Andi says. "My mom once remarked to me that I don't seem very close to William. But she didn't say anything more. I think they would rather ignore the possibility that the marriage isn't real."

"It would be awful if our parents want to move to Beijing to help take care of the baby."

In the past, gays and lesbians struggled to connect with each other to arrange fake marriages. While the proliferation of online “matchmaking” forums in the early 2000s has made connecting easier, finalizing a cooperative marriage can still take years of effort, with many potential partnerships falling through because couples cannot agree on shared expectations.

“I tried several times to look for a gay husband, but they were all so demanding,” says Charlene, a Shanghai-based public relations executive.

“They wanted a pretty wife to bring to company parties and many expected me to contribute to the purchase of a shared apartment. One man even asked if I would get plastic surgery to widen my eyes!”

“There are many more people who want to have a cooperative marriage than those who are actually in these marriages,” says Stephanie Wang, a Beijing-based researcher and LGBT community organizer who interviewed 22 cooperative marriage partners for her University of Hong Kong postgraduate thesis in sociology.

In some of the bad cases, people desperate to end a cooperative marriage have “outed” their partner’s homosexual orientation to their spouse’s parents, according to Wang. Others have fought bitterly about issues such as shared expenses, property and whether to raise children, she says. Gender politics also play a role, with women often expecting men to shoulder more expenses.

Gay and lesbian spouses would have little legal recourse if one party failed to honor any agreement. Jing, a lesbian who runs an online forum for people in northern China searching for cooperative marriages, advises approaching it like a business deal.

“You wouldn’t start a business with someone you don’t know. Before making a decision to marry someone, even if it is a fake marriage, you should talk to the other person and agree on as many things as you can think of in advance,” Jing says.

“It is also important to choose someone who can become a friend and with whom you would be happy to have a life-long relationship. Otherwise it is very hard to make things work long term.” 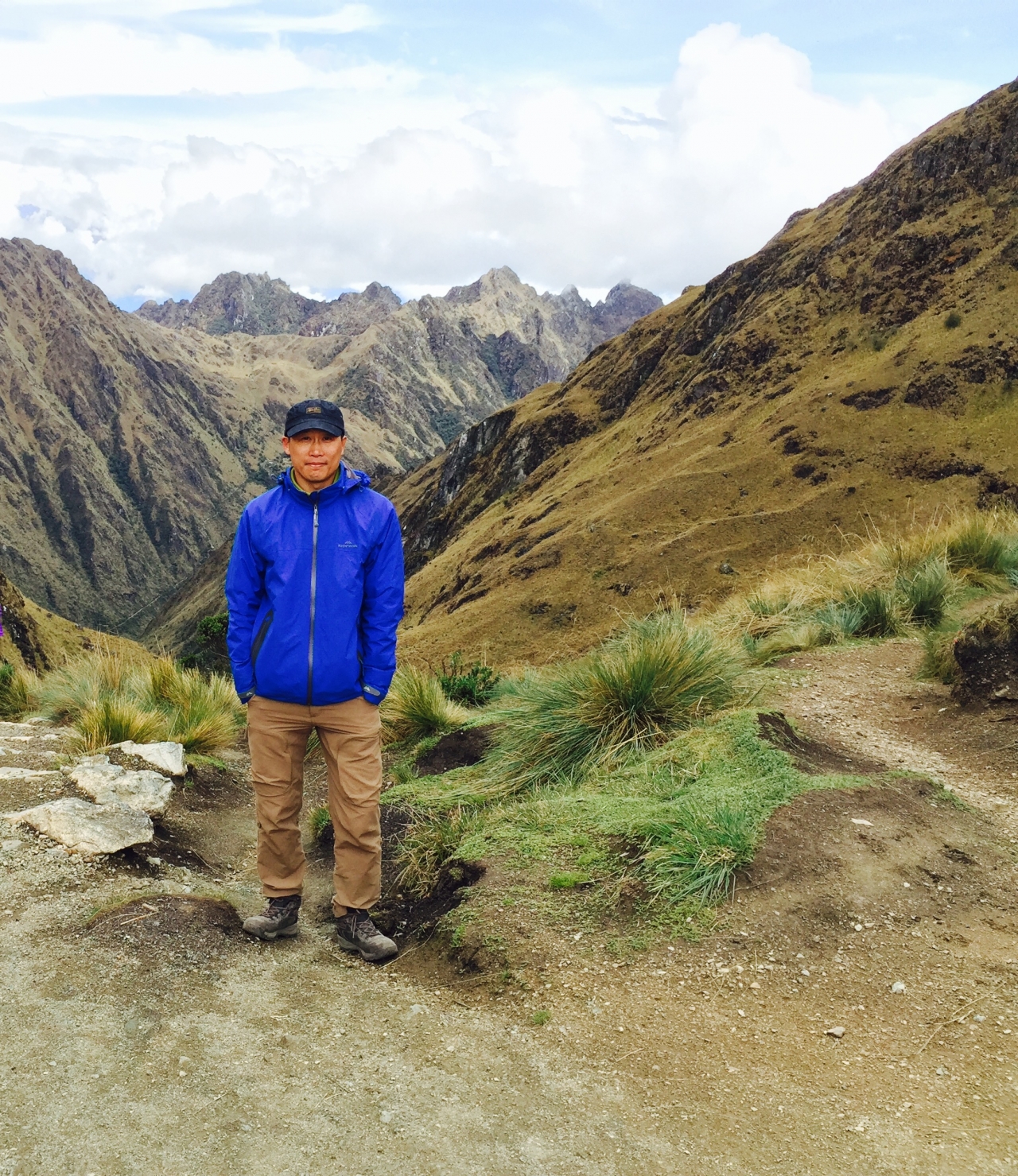 William on vacation in Chile.

William and Andi say they have not had the problems experienced by some of the more tumultuous couplings they’ve heard about.

Ten years ago Andi replied to a want-ad from William on an internet forum. It was a simple message: gay man in Beijing seeks a lesbian wife in the city. After talking online for several days they met in person at a KFC restaurant. They discovered they had similar expectations. Neither wanted to live together, and they agreed not to get a marriage certificate because they didn't want to have legal obligations to one another — a common decision in cooperative marriages.

But now that they are debating whether to have a child, the couple is facing their most difficult negotiation yet.

“Tian a! [Oh god!],” Andi sighs, “It would be awful if our parents want to move to Beijing to help take care of the baby.”

“Let’s talk about the details later …” William says, as he busies himself finding spots in his already immaculate apartment to clean.

Andi points out that fake marriages do not take place only in gay communities. In China, some straight people also turn to fake marriages in order to have children. According to Chinese law, children born out of wedlock cannot obtain a household registration permit (“hukou”), which would deprive them of basic social services and educational opportunities.

Marriages between straight people who do not want to have typical romantic relationships for various reasons — because someone doesn’t want to have sex, for example, or needs a partner in order to raise children legally — are colloquially known as “sexless marriages” in China. There are no estimates on the number of “sexless marriages,” but one Chinese website that caters to straight people looking to enter into such unions claims that more than 200,000 people have registered for their matchmaking service and over 25,000 successful matches have been made so far.

The desire to have a child was the main reason why Jasmine, a heterosexual woman, decided to marry a man she didn’t love. After she turned 30, with her parents increasingly nagging her to marry, Jasmine agreed she was running out of time and married the next man she dated. She now lives in an apartment in central Beijing with her husband, their 3-year-old daughter and her in-laws.

“My life is all about my daughter,” Jasmine says.

Unlike William and Andi, Jasmine and her husband do not communicate well. She feels too ashamed to talk to friends about her situation.

In contrast, Andi says she feels optimistic about the challenges ahead.

“I think we will be able to solve the problems that come our way. And gradually, traditional attitudes about sexuality and marriage in China are sure to change.”