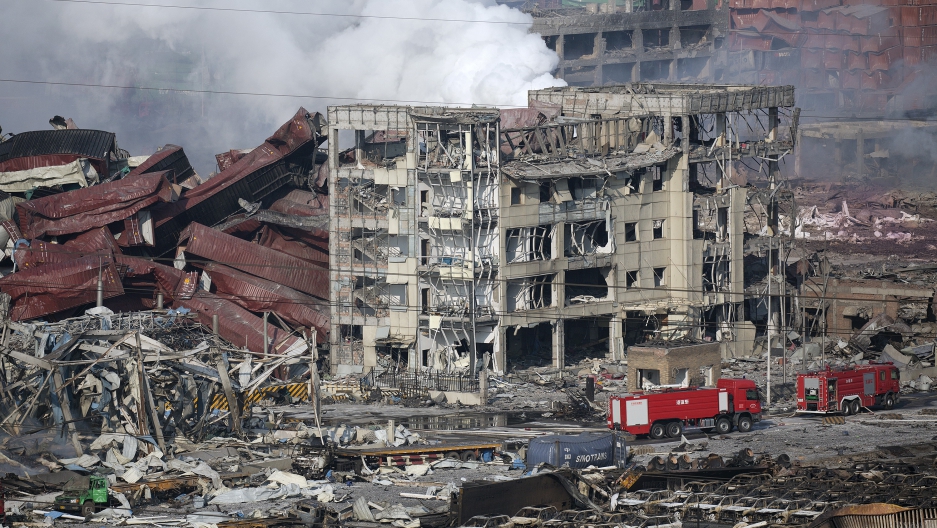 Fire engines at the site of the explosions the Chinese port city of Tianjin on August 13. Two huge explosions tore through an industrial area where toxic chemicals and gas were stored, killing scores of people including fire fighters.

Chemical explosions in the Chinese port city of Tianjin sent enormous fireballs and thick acrid smoke into the air on Thursday, shattering windows miles away. The death toll climbed to at least 50 on Thursday with more than 700 injured. The blasts occurred at a warehouse stocked with hazardous chemicals.

The Guardian's Fergus Ryan arrived on the scene hours after the blasts. "I saw huge chunks of metal that had been stripped from shipping containers and had been flung over the highway. They had flown 500 meters to land jutting out of the ground."

An initial explosion triggered a second, even bigger one. The National Earthquake Bureau said the first blast was the equivalent of 3 tons of TNT, and the second 21 tons. "As I got closer to the blast zone, I saw underneath the highway scores of trucks and cars that were parked underneath the highway," said Ryan. "All of the windows had been smashed and the vehicles had been blackened. There was glass all over the ground."

Enormous fireballs from the blasts had rolled through a nearby parking lot, turning a fleet of 1,000 new cars into scorched metal shells.

Initially, more than 1,000 firefighters were sent to the industrial zone in Tianjin, a petrochemical processing hub about 75 miles east of Beijing. Tianjin is an important port in China, handling vast amounts of metal ore, coal, steel, cars and crude oil.

As Ryan made his way through the wreckage, he could see dozens of contorted shipping containers and lots of smoke. "I could also see huge plumes of what started off as white smoke billowing out of the area but then suddenly turned yellow." And he noticed a strange smell. "Definitely when I was right up very close to the blast scene, there was a very acrid smell and the color of the smoke coming out from the blast zone was unusual."

Amid the commotion, Ryan saw signs of goodwill. "Outside of hospitals, there were people with supplies, bottles of water and food. There were also fleets of taxis who were taking victims and their families to and from the hospital for free."

Chinese authorities say the warehouse where the blasts occurred belongs to Ruihai Logistics, a company that stores hazardous and flammable petrochemicals, sodium cyanide and toluene diisocyanate.

The cause of the disaster is not yet known, but China has a history of problems with the enforcement of safety and environmental regulations.

On paper, China’s safety regulations are pretty good, according to The World’s former Beijing correspondent, Mary Kay Magistad. “They’ve improved a lot over the past decade. In practice, a lot of local governments feel that it’s easier for local enterprises, local companies, if they don’t enforce them too stringently because there’s more room for profit. If there’s more profit, it looks better for the local officials when they put in for a promotion.”

The situation is never clear, even at the local level. “Parts of the local government,” says Magistad, “might think that environmental safety standards are being enforced. But people in other departments with a wink and a nod say we don’t really need to do this. Or just through neglect, not even through a positive decision, but through just not being very pro-active in enforcing the regulations could let something happen that shouldn’t have happened.”

The Chinese people are not happy with this, to say the least. But a civil society movement that had been scoring successes in the effort to clean up the environment and improve attention to safety issues, has been stifled under the new government of President Xi Jinping.