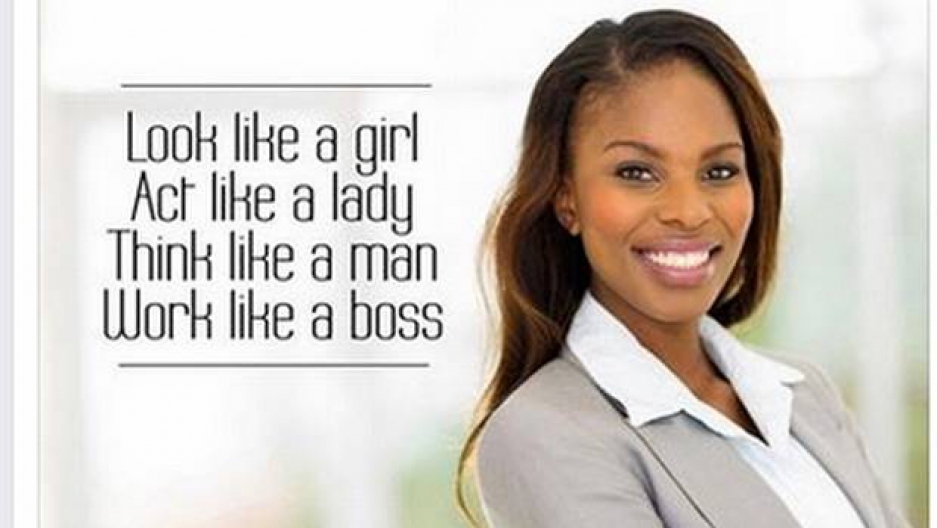 "I did a double-take," says journalist Pearl Boshomane of The Sunday Times in South Africa, who wrote about the ad after seeing it on Twitter. "I actually couldn't believe that ad went out in the first place. I couldn't believe that they were, excuse my words, stupid enough to do such a thing."

For one thing, Bic has been through this before. In 2012, it introduced Bic for Her, a line of pink and purple pens "designed to fit comfortably in a woman's hand." Boshomane practically spits at the memory. "Did they not learn anything from that? What is a pen for a woman? Come on!"

Boshomane says unfortunately, the dated approach is somewhat standard in South Africa, and extends to different ethnicities as well as women. "It was just another reason for us to roll our eyes because it's been going on for so long. People still don't know how to talk to women or how to speak about women, like we're foreign creatures and cease to exist until it's August 9 [National Women's Day]. "It's like that's the only time anybody really tries to speak to us beyond tampon adverts. And when they do try to speak to us, it's always a disaster."

The outcry in South Africa over the Bic ad happened organically, on social media. "I saw it on my [Twitter] timeline. It was a male writer who had shared the picture. And it was like, oh my goodness, what the hell! And I shared it on my Facebook and people all around were doing it like that."

South Africa is a country infamous for its high rate of violence against women. It's also famous for its constitution's expansive protections for human rights. "Our constitution is just so progressive when it comes to rape and same-sex marriages. We were one of the first countries to legalize it. It's been about 10 years now," says Boshomane. "People's rights are protected so beautifully in the constitution but the people in charge of implementing the system and helping to protect us don't do so, not as effectively as they can anyway."

There's not a direct link between that ineffectiveness and something fairly benign like the Bic ad, but Boshomane does think there is a connection. "I feel like if we were empowered not just on paper but in reality, then advertisers and brands would be a lot more, they'd think a lot more about how they approach women or advertise to women or people of color."

Two days after posting the ad, Bic took it down and issued an apology. Actually two apologies, says Boshomane. "The intial apology was a non-apology which was, 'Sorry if you were offended.' Come on, that's not really an apology. Not only did they not really apologize. They actually took the words from somebody else from some horrible blog post.  When people started attacking them for the non-apology and taking them to task, they issued another apology. 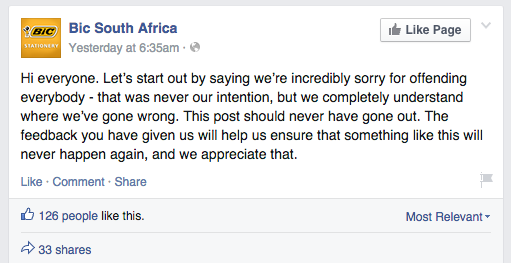 A screenshot taken on Aug. 12, 2015 of Bic South Africa's apologies for a National Women's Day post on Facebook.