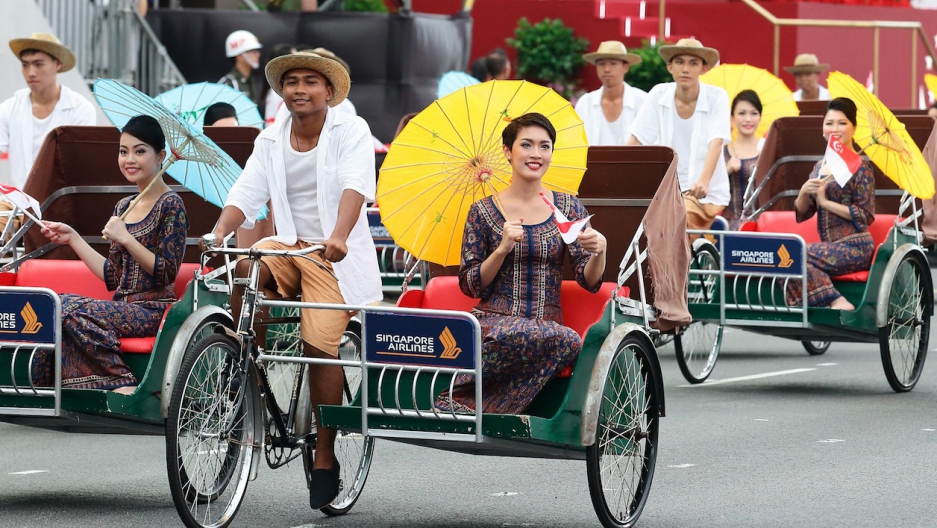 SINGAPORE — Fifty years after Singapore was accidentally born as an independent country after getting unceremoniously kicked out of Malaysia, it has become one of the most admired and envied countries in the world.

A tiny fishing island with no natural resources, Singapore started off with plenty of disadvantages: malaria, poverty, racial tensions among the ethnic Chinese, Malay and South Indian populations.

Nevertheless, it has since become one of the world’s wealthiest places, with the third-highest percentage of millionaires after Qatar and Switzerland. It places at or near the top of global rankings for safety, cleanliness, ease of doing business, and freedom from corruption.

From its top-notch education system to its efficient infrastructure, Singapore had a lot to celebrate at its Golden Jubilee over the weekend, especially as many continue to mourn the death of Singapore’s founding father, Lee Kuan Yew, in March. The SG50 celebration included a National Day parade, soaring air force aerobatics, nationalist songs, and heart-felt tributes.

So why is it that many Singaporeans are frustrated? Since the death of Lee, it has become increasingly apparent that a growing number of Singaporeans, especially the young, believe that their society is in need of a change after decades of “Nanny State” rule.

Regulations are famously strict. Law-abiding Singaporeans know better than to jaywalk or litter — it’s called “A Fine City” for a reason. First-time litterbugs face a fine of up to S$1,000 (US$713). So do smokers who light up in public buses, taxis, and in public places. Jaywalkers can be fined S$20 (US$14) on the spot.

The sale of chewing gum remains banned since the days when the sticky stuff was commonly discarded on sidewalks and subway train doors— and carries a fine of up to S$2,000 to the seller. But Singaporeans feel the mere mention of the ban betrays an oversimplification of their country, and there is no clamor for its reversal. Pharmacists and dentists are allowed to sell “therapeutic” gum with a medical prescription, including standard sugar-free gum.

Without fanfare, the country is quietly moving away from some of its more severe criminal penalties. Caning remains a punishment for various offenses, including immigration violations, vandalism, and as an alternative (with life imprisonment) to the death penalty, but its use is considerably down. In 2012 the country abolished some instances in which drug trafficking carry a mandatory death penalty.

An early sign of growing restlessness came with the 2011 parliamentary election, when the People’s Action Party — which has ruled Singapore for all of its 50 years — saw its lowest level of voter support since independence.

Then came the release of a 2013 government policy paper that projected that the population would need to rise by over a quarter to 6.9 million by 2030 with foreigners making up nearly half of it to offset low birth rates and an aging population. Online comments continue to reflect increasing agitation over a growing reliance on foreign labor as well as exploding housing costs, inadequate infrastructure for the growing population and a rising income gap.

Media that operate in the country must seek a government license and must operate under rules banning material deemed objectionable on grounds of morality, security, public interest and social harmony in the multiethnic island nation. The golfing phrase “OB markers” stands for the unwritten rule that some topics of discussion are out of bounds. “The genius of the principle of OB markers lies in its ambiguity — the markers are not clearly defined; it is incumbent on the journalist to figure out what can and cannot be said; it keeps everyone guessing,” writes media critic Salil Tripathi.

Still, those boundaries — however vague — are getting some pushback.

Another blogger, Roy Ngerng, was found guilty of defaming Prime Minister Lee Hsien Loong (the eldest child of Lee Kuan Yew) after comparing the handling of a compulsory savings plan for Singaporean workers to a local church scandal.

Government prosecutions against both bloggers prompted some to say that Singapore should be mature enough to handle even provocative criticism.

Showing its pragmatic side, Singapore’s government says the penal code will go unenforced, which averts a showdown with very conservative social forces. But LGBT advocates say the law’s presence alone is intolerable in a cosmopolitan city.

“Young LGBT people grow up in fear of being bullied by schoolmates, and cast out by family members,” Pink Dot organizers said in a statement.

The feel-good factor over the SG50 anniversary masks a growing feeling that many Singaporeans, particularly younger ones, are ready to move past the status quo.

But how much social change is needed — and how fast — remains an open question.

“I hope society becomes more gracious,” said Yew Siang Tang, a 21-year-old student at National University of Singapore. “A lot of us focus on ourselves and the rat race. You don’t really see people wanting to help others.”

Paul Koh, 25, a student at Nanyang Technological University, says he understands the need for more foreign labor to keep the economy growing. But he wants to see corresponding improvements to the mass transit system, so Singaporeans don’t feel crowded out.

Eugene Tan, a law academic at the Singapore Management University, sees social progress on issues such as gay rights moving in the same direction as they have in Europe and North America — but not as quickly.

“The crucial difference is the pace of change,” he said of Singapore. “The more radical the change, the longer the time lag.”