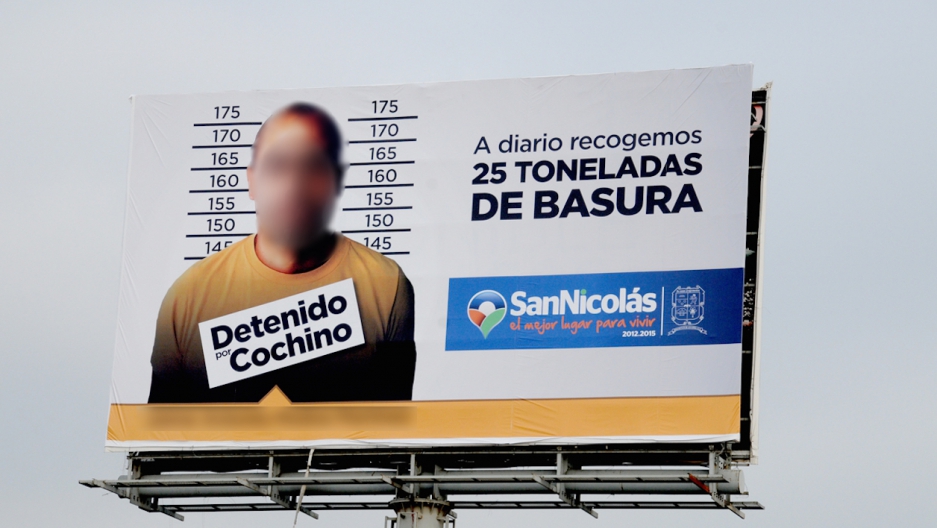 This man, whose face and name we've obscured, was "arrested for being a pig."
Credit: San Nicolas council
Share

In a Mexican city near the Texas border, there’s one type of culprit you just can’t escape.

We're talking about serial litterers. They dump trash over and over again, and the affluent city of San Nicolas de la Garza is fed up with them.

So much so, the municipal council voted to name and shame anyone caught littering three times, by arresting them and then slapping their mug shots and full names on billboards for all to see.

The billboards say: “Detenido por cochino.” That literally means “Arrested for being a pig,” although in Spanish slang “cochino” also means “filthy.”

“The truth is we have to do something to change what’s happening,” Mayor Pedro Salgado said. “We provide the best home garbage collection in the country and, even so, we’re picking up 25 tons of trash daily from the streets and parks.”

But apparently, giant-size mug shots blazoned with first and last names is going a little too far. At the end of July, Nuevo Leon state’s human rights commission ruled it unconstitutional.

“Nobody should be subject to arbitrary or abusive harm to their private life, of their family, at home, or illegal assaults on their honor or reputation,” said commission head Minerva Martinez Garza.

That prompted San Nicolas de la Garza to cover up the billboards with this message: It reads: “We disagree, but in compliance with the human rights resolution we are covering up the face of someone who dirties our city.” “Every day, we pick up 25 tons of trash.”

GlobalPost was unable to track down the man on the billboard to see whether he’s more or less likely to litter again.