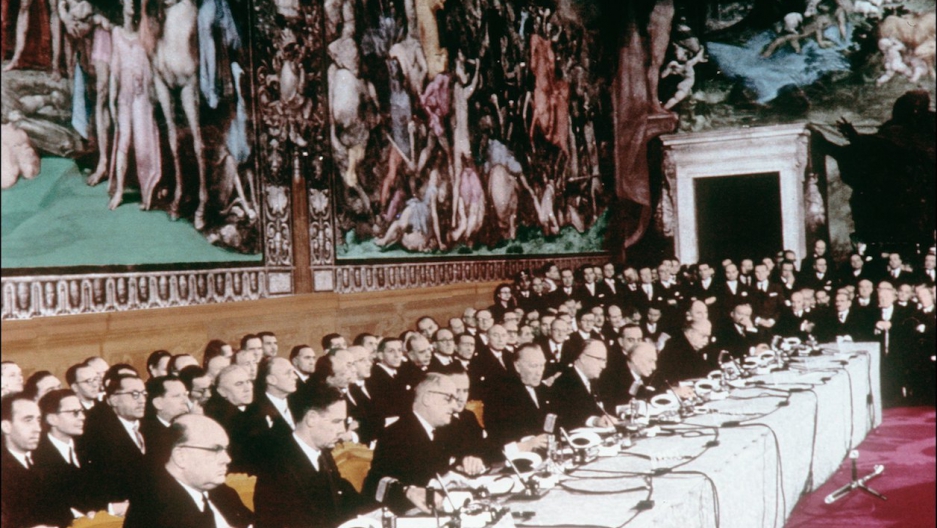 France is suggesting the EU's core members could be whittled back down to the six countries that launched the project back in the 1950s. In this file photo from 1957, foreign affairs ministers sign the Rome treaty, which led to the founding of the ECC.
Credit: OFF
Share

LISBON, Portugal — Europe is a mess.

The $95 billion Band-aid that managed to keep Greece attached to the euro zone over the summer still couldn’t patch over the fault lines threatening to fracture the European Union.

The EU’s 28 nations are deeply divided on fundamental issues like economics and immigration. Disenchanted voters are turning to euro-skeptic nationalist leaders, while Britain is poised to vote on leaving the union entirely.

The turmoil hasn't stopped Europe from pushing the pause button on politics over the summer. But while the public hits the beach, EU leaders are using August downtime to figure out a plan to fix Europe.

"Europe can't be reduced to just rules," he wrote in the Journal du Dimanche newspaper. "It must convince people ... that [the EU is] the best way of protecting the values and principles that underpin our common culture, our way of life, our social model."

Hollande is expected to present his blueprint for reviving the EU this fall. The fundamental fix? Paring down the EU to a handful of “core Europe” countries.

Hollande's big idea is for a "vanguard" of like-minded nations to move ahead toward unity, leaving behind any countries unwilling or unable to keep up.

French Prime Minister Manuel Valls suggested that said vanguard could be limited to the six countries that launched the EU project back in the 1950s — France, Germany, Italy, Luxembourg, Belgium and the Netherlands.

Talk coming out of Paris stresses the need for closer social, fiscal and political unity among nations already locked in a monetary union around the euro. (Or at least, some of them.)

Barcelona-born Valls left out the land of his forefathers, but after grumbling from south of the border, French officials acknowledged that Spain too could be part of "core Europe."

The core would have a common budget, run by an "economic government." There would be harmonized corporate taxes, a shared minimum wage, funds to rescue members in trouble, joint euro bonds to mutualize debt and unified social security.

Hollande's supporters say the Greek crisis shows such changes are essential to prevent the 19-nation euro zone from imploding.

More from GlobalPost: Greeks are worried that their precious heritage will be sold off to pay their debt

However, the back-to-the-future feel to the French ideas will make it difficult for Hollande to get support from other EU members.

Back in the 1950s and 1960s, France was Germany's economic equal. Together they formed the EU's "engine of integration," with Italy and the others happy to follow in their slipstream.

Hollande's plan harks back to those days, seeking to safeguard a French economic model with high taxes, state involvement and generous social protection.

Out in the cold would be euro zone members like Ireland, Estonia or Slovakia, whom the French accuse of social or fiscal “dumping” — unfair competition through low wages or reduced corporate taxes to lure away investors and undercut French exports.

As the architect of a revived Europe that protects France's cherished social model, Hollande also hopes to boost his battered ratings ahead of presidential elections scheduled for 2017. He’ll be facing ultranationalist challenger Marine Le Pen.

There's just the tricky question of convincing Germany — and the others — to go along with the idea.

Italy is keen. Finance Minister Pier Carlo Padoan has been urging political and fiscal union with many of the elements the French are pushing.

"We have to have a different euro, a stronger euro,” Padoan said in a recent Financial Times interview. "To have a full-fledged economic and monetary union, you need a fiscal union." With the existing monetary union the 19 nations in the euro zone already share a common currency, but they are free to pursue their own economic policies (within certain limits). The lack of fiscal union means they decide their own tax rates.

Hollande will have more problems convincing others.

Luxembourg fears harmonized taxes could jeopardize its position as the EU's richest country; the Netherlands leans toward British-style free-markets rather than state-heavy French economics; Germans worry they'll end up financing many of the French ideas.

Doubters who feel a European economy served "à la française" might not be good for businesses point out that the German economy has grown at almost double the French pace over the past 20 years. French unemployment at over 10 percent is more than double the rate in Germany.

Germany's initial reaction to Hollande's ideas was polite, but non-committal. However, Germany also acknowledges something needs to be done to fix the EU.

Finance Minister Wolfgang Schauble — Europe's high-priest of austerity — has long argued for a hardcore of nations to move forward to greater unity. Economics Minister Sigmar Gabriel co-authored an article in June with his French counterpart backing many of the ideas that Hollande is expected to put forward in the autumn.

"Building this new architecture is fundamental  ... to ensure the political and economic stability of the euro and the union," wrote Gabriel, who leads Germany's Social Democratic Party.

For changes to happen, France will need to get Germany onboard. There are areas of common ground, but Germany is wary of anything that forces its taxpayers to dig deeper or weakens euro-zone commitments to tight finances.

Berlin will also want to avoid French two-speed Europe ideas alienating Poland and its other friends among eastern EU members, or increasing the odds of a Brexit when Britain holds its referendum on leaving the union — given that the UK would be well outside Hollande's core group.

Hollande will have to bear that in mind as he prepares to put forward his big plan in September.

Big plans for overhauling the EU have been floated before and usually come to little. This time, however, few doubt that the 28-nation bloc desperately needs reform.