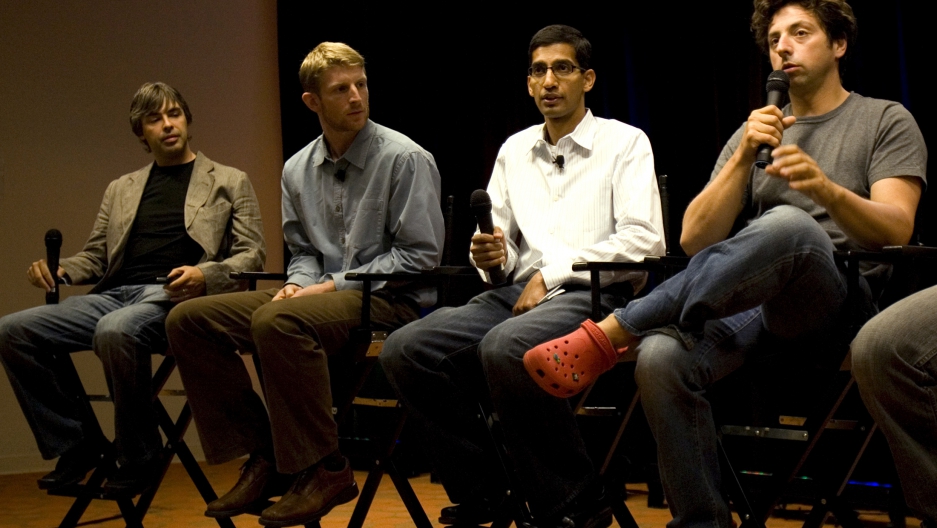 Sundar Pichai (second from the right) in 2008, when he was vice president of product management at Google, introduces Google Chrome at company headquarters in Mountain View, Calif. He sits with Google founders Larry Page (left) and Sergey Brin (right), and colleague Brian Rakowski (second from left).

The headline Monday was that Google is creating Alphabet Inc. to be its parent company.

The second wave narrative was about Sundar Pichai, set to become the new CEO of the Internet giant. He joins not just the most powerful people in tech, but also a growing group of high-profile, Indian-born workers who have risen to their companies' highest ranks. Satya Nadella became CEO of Microsoft last year and Shantanu Narayen began leading Adobe in 2007.

Pichai's ascension is being hailed as an example of the virtues of Indian managers and a boon for Indians everywhere. AnnaLee Saxenian, dean of the school of information at UC Berkeley, says it's an example of how the glass ceiling has lowered in the last 30 years.

"I think the fact that we have Indians now at the helm of Google and Microsoft is a statement of how Indians have become part of the fabric of tech in the US," Saxenian says. Through the 80s and 90s, Indians would be involved in startups but would not get promotions or, worse, would be replaced at the point of new companies receiving major funding. In 1999, less than 10 percent of Silicon Valley startups were created by foreign-born entrepreneurs. Ten years later, more than a quarter have foreign-born founders, she says.

But it would be a mistake to focus on this narrative as proof that immigrants in America have "made it," says sociologist Pawan Dhingra of Tufts University.

"We should find a way as a community, as a nation, to celebrate the achievements of a group in a complicated way. Not a simplistic way," Dhingra says. "Celebrate when someone does really well, but recognize that it's the systems and the histories that enable these things."

A study says Indians are successful managers coz of "strong will + humility": Sundar Pichai & world of Indian CEOs http://t.co/n3HXGVPCgt

I know I'm late but need to say this: Indians are taking over the world. Sundar Pichai is CEO of Google http://t.co/vsFV2ejLOn

Among the systems that enabled the rise of people like Pichai, Nadella and Narayen? India's education system. In the 1950s, just after India gained independence from the British Empire, they created a rich educational system. "Post-independence, India put a lot of attention to engineering and the sciences to uplift themselves," Dhingra says. This included the famous Indian Institutes of Technology, now 20 campuses across the country. That created a large supply of extremely talented and well-educated people who became competitive in the global marketplace.

"It's not a surprising story that if you educate a lot of people but don't have a job market for them, they'll take those skills elsewhere," Dhingra says. Many took their skills to the US, bolstered by visa programs that welcomed them. Immigration of these highly-educated engineers and scientists from India swelled through the 90s. The Bay Area, which would become home to Silicon Valley, was a natural landing place for many of the immigrants because Indians had been migrating there for decades.

Saxenian also points to the longer tail of the Immigration and Naturalization Act of 1965, which eliminated quotas and opened up pathways for skills-based visas for immigrants. "Qualified immigrants — the best and the brightest from all over the world — were getting into universities. And then when they graduated, they got sucked into Silicon Valley, which was just booming," she says.

These pathway created a funnel for Indian immigrants. "Once any immigrant group has a name for itself in a particular industry, then it become easier for other people in that group to get a foothold," says Dhingra. And then came Y2K, also known as the "millennium bug." Before the year 2000, tech companies swelled their ranks to prepare for a major switch in how years were notated. And hiring from India was already part of how companies operated.

Politics in the US allowed for companies to meet the demand. The H-1B "specialty occupation" visa program was created in 1990. Recently, it has been the subject of intense debate. Companies say they need the program, and in some cases expansions of the program, because they cannot find qualified people to hire who are already here in the US. Critics say that too many companies use the H-1B visa program to deflate wages. Disney, for example, came under fire in June for replacing 250 American workers with new hires from India. 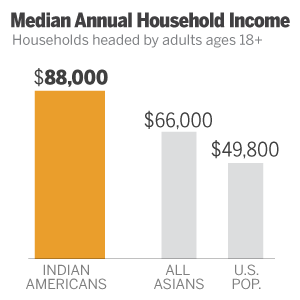 So the question for Dhingra is not whether Indians are successful as immigrants to the US — the demographics don't lie  — but what are the systemic reasons for that success.

"It's not because of some innate cultural drive," he says. India is, after all, one of the most impoverished countries in the world. The Indians who are breaking the glass ceilings of tech companies are exceptional not only among most other Americans, but among most Indians. "They're not the normal distributions of Indians."

It's important to remember the Punjabi motel owners, taxi drivers and farm laborers who are in California's peach canning industry a stone's throw from Silicon Valley — if you are popping open a can, "chances are an Indian hand has touched those peaches," Dhingra says. (Dhingra is the author of the 2012 book "Life Behind the Lobby: Indian American Motel Owners and the American Dream.")

"On one hand, you have all these spelling bee winners," Dhingra says. "On the other hand, a large percentage of Indians in New York City are not proficient in English."

And that's the more complicated narrative that needs to be part of the Indian immigration story.