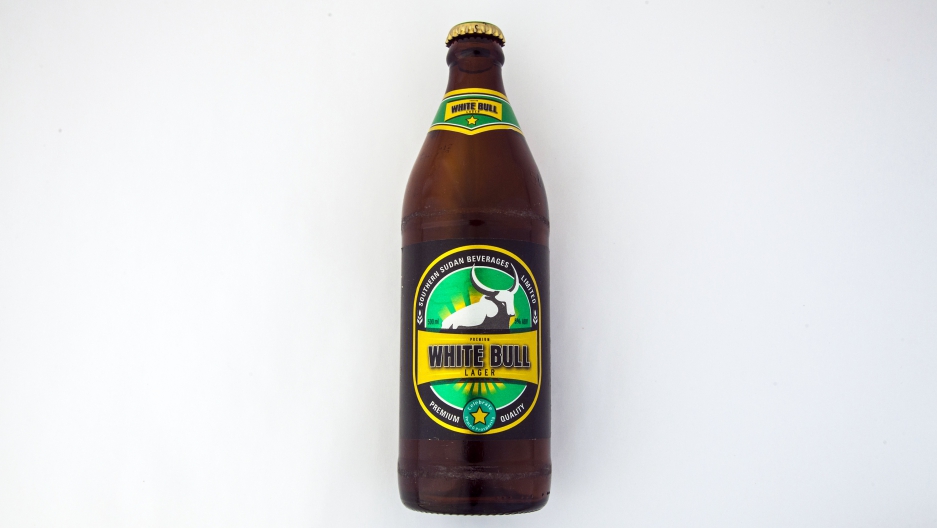 A bottle of White Bull beer, produced in Juba, South Sudan, is seen in this photo illustration taken in Juba November 18, 2012.

When your country has only one brewery, producing one beer, a potential shutdown is catastrophe.

South Sudan's "White Bull Lager" may soon be a lost symbol of the country’s independence. In 2011, South Sudan became independent from Sudan. One of the main reasons? Religion.

Sudan was imposing Muslim Sharia law on a mostly Christian population in the south. And that meant no alcohol. So a brewery seemed like a great way to show the separation.

“In the South, beer and alcohol is consumed in ceremonies such as weddings and other cultural rituals and for it to be banned because of a religion that they do not really subscribe to was problematic to them,” says Peter Biar Ajak, founder and director of the Center for Strategic Analyses and Research in South Sudan.

In 2009, brewing and beverage giant SABMiller invested $50 million to open the first and only brewery in South Sudan, developing it into the country's second-most profitable business, after the oil industry. And it had a great start — until the economy collapsed.

South Sudan doesn’t produce anything but oil. And oil sales are down because of the ongoing civil war.

“[South Sudan] imports everything, including food, from neighboring countries. And to do that, it needs foreign exchange to buy those products. So given the dramatic reductions in the production of oil, due to the fighting, the foreign exchange have reduced dramatically. So purchasing everything from outside has become a lot more problematic,” Ajak says.

And that is bad news for the brewery, which already had to let go some of its hundred employees. But the loss of employment isn't the only problem; Ajak says the successful operation was seen as proof that doing business is possible in South Sudan.

So shutting down the brewery would be bad news for the country's already weakened economy. But Ajak does find a positive in the factory's closing.

“People [in South Sudan] have been traumatized by years of conflict. This war has been going on since 1983. So a lot of people have grown up through the war, they have experienced it, there are a lot of people with missing body parts ... and access to alcohol has quite traumatically led to addiction,” Ajak says.

According to Ajak, the closing could probably help reduce alcoholism, but wouldn’t eliminate it as beer from neighboring countries like Kenya or Uganda will still be available — at a much higher price.

Correction: An earlier version of the story gave an incorrect date for South Sudan's independence.