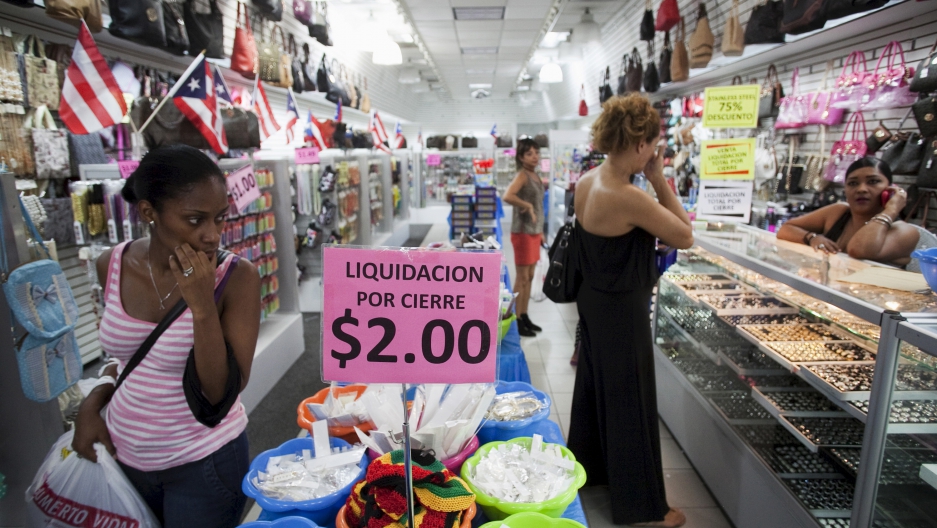 Everything must go: People shop in a store in San Juan, Puerto Rico, on Aug. 3.

Even the good news in Puerto Rico’s debt crisis has a grim underpining.

According to a report Monday in Bloomberg, officials in the commonwealth are scrambling to raise funds to make a crucial payment, due in January, on its General Obligation bonds, while keeping the government functioning through November.

On the one hand, that's a good sign. Puerto Rico will probably make its next big payment, which didn’t seem likely a week ago when it defaulted on a $58 million payment on bonds owned by its Public Finance Corporation and stopped setting aside funds needed to make future interest payments on general obligation bonds.

But take a step back, and it still looks pretty bleak. The governing body of a US territory is trying to come up with enough cash to keep crucial operations running through November, just three months away. In June, Governor Alejandro García Padilla declared the island’s nearly $73 billion in debt to be “unpayable” and grabbed headlines by describing the island’s situation as a “death spiral."

By November, the path forward may be clearer. The Padilla administration has tasked a working group to create a five-year fiscal reform plan that is due by Aug. 30. The group is basing their plan on a report on the island’s fiscal crisis by a group of former IMF economists, including lead author Anne Krueger.

They have their work cut out for them. Puerto Rico doesn’t just have a debt crisis, but a converging set of crises that are compounding on each other.

Take healthcare. Puerto Rico is facing looming cuts to its Medicare Advantage program and is running out or Medicaid funds, meaning, as the New York Times put it in a recent report, “its health care system is headed for an all-out crisis, which could further undermine the island’s gutted economy.”

Or there is the matter of its pension liability. A report last year by Morningstar concluded that Puerto Rico’s $35 billion pension liability is “now put at $8,900 per person, and the island's three public pension plans are projected to deplete their respective assets in the coming years,” according to Reuters.

Ultimately, for Puerto Rico to pay off its debt, it must reverse its nearly decade long recession, which has its roots in 2006. That’s when the US Congress let expired a tax incentive program that encouraged US manufacturers to operate on the island. Companies left, especially pharmaceutical companies that had employed thousands. The US entered the Great Recession soon after, and Puerto Rico’s economy continued to spiral downward and hasn’t recovered since.

This has produced two other intertwined “crisis” — a lack of jobs and outward migration of young workers. Unemployment has remained high — it’s currently at 12.6 percent, more than double the national rate, and the population has fallen from 3.8 million in 2004 to 3.5 million in 2014, according to census figures

So what’s next? Congress has been considering legislation that would allow Puerto Rico to seek Chapter 9 bankruptcy protection. This would enable Puerto Rico to negotiate with all its creditors at once in a binding process overseen by a judge, as several US cities, including Detroit, have done in recent years.

For a brief moment the proposal seemed feasible. Democrats, including the Obama administration and 2015 frontrunner Hillary Clinton, favor granting Puerto Rico access to Chapter 9, while Republican contender Jeb Bush, and Republican senators Orrin Hatch and Charles Grassley signaled their support for a proposal to open Chapter 9 to Puerto Rico’s state agencies, including its heavily indebted public utility company. House Republicans weren’t so keen, however, and conservatives have called the proposal a “bailout.” It’s unclear how the proposal could proceed in the next year.

One of the leading advocates for Chapter 9 bankruptcy protection for Puerto Rico has been Congressmen Luis Gutiérrez (D-Illinois). Gutierrez has continually tried to sound the alarm on Puerto Rico’s converging set of crises in speeches on the US House floor. In one last month, he argued that the fiscal crisis needs to be addressed before debates around the island’s political status. It made the rounds on social media but seemed to have little impact. When asked if the thinks there is any politically viable way for Congress to address the crisis in Puerto Rico, he doesn’t sound optimistic.

“I have a responsibly, notwithstanding what is viable, to demand what is necessary, because if we don’t have a genuine conversation, then the people of Puerto Rico are led to believe that all we need is Chapter 9 , and it will be resolved. No, it won’t be resolved. The next day there will be a further crisis in Puerto Rico. It’s 500,000 people fleeing the island at this point. And there is going to be hundreds of thousands more.”