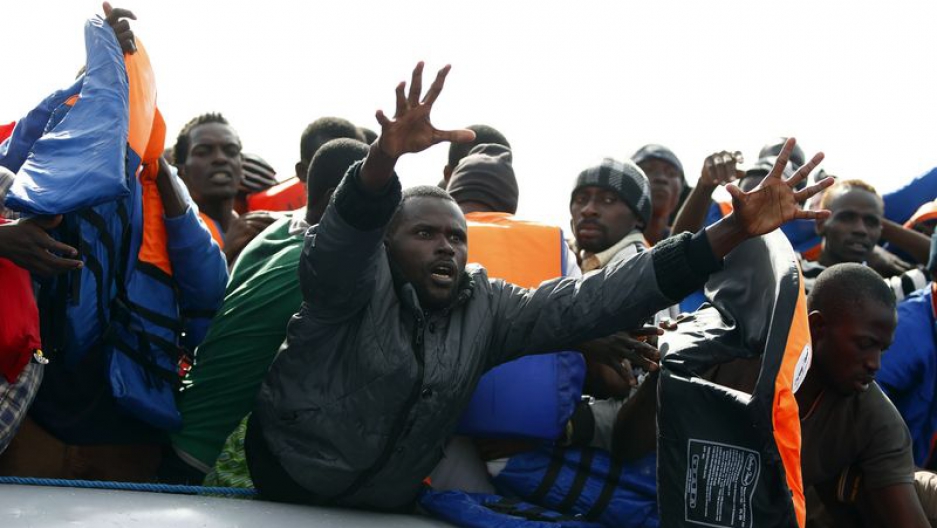 During an MOAS rescue mission, hundreds of mirants are helped.

The number of worldwide refugees last year totaled over 50 million — the highest since World War II. They've come from most corners of the world — but nowhere, perhaps, has more attention than the Mediterranean Sea, where approximately 200,000 people have attempted the journey to Europe from Syria, the Middle East and Africa this year, alone.

It’s a dangerous, often deadly, passage. So far, more than 2,000 migrants have died on the trip this year.

As the crisis becomes increasingly complicated, so too does the question of responsibility, particularly in Europe. While Europe is quick to condemn the migrant deaths, many countries have held that they simply don’t have the resources to take in more immigrants.

While European leaders have managed to deflect the problem, Christopher Catrambone of Lake Charles, Louisiana, saw a simple fix. He devoted $8 million to buy a ship, the Phoenix in Virginia, outfit it and transport it across the Atlantic to Malta. There, he assembled a team in 2014 that cruises around the Mediterranean to look for boats and migrants to rescue. His organization’s name is the Migrant Offshore Aid Station (MOAS).

The story is the subject of a new VICE documentary, “The Smartest Man on the Sea.”

“I think it’s quite unique because it’s an organization created by private individuals doing work that you’d expect a government or a nation-state to be doing — you know, coast guards, navies,” says Simon Ostrovsky, a VICE news correspondent who created the documentary. “But not a guy from Louisiana who bought a boat in Virginia.”

Catrambone's wife, Regina, joined him in this humanitarian effort.

Ostrovsky sees a personal responsibility, maybe even guilt, in Catrambone’s efforts. Catrambone was a successful insurance provider for contractors in the Iraq and Afghanistan wars.

“I think  his whole narrative arc is pretty interesting, because if you think about it , the instability that caused this migrant crisis leads all the way back to the American invasion of Iraq,” says Ostrovsky. “And this is a person who essentially made his name — I’m not blaming him for the Iraq War, obviously — but he’s a person who made his career and his name during the Iraq and Afghanistan wars.”

While Catrambone didn’t necessarily agree with the parallel made by Ostrovsky, his boat is nonetheless at work collecting the consequences of recent instabilities in the Middle East.

In addition to the individual lives they’ve saved, MOAS has also been consequential in changing the tone of European leaders.

“European leaders are stuck between two very difficult decisions,” notes Ostrovsky. “They have to either make their constituencies displeased that they’re bringing more illegal migration into Europe, or they have to be blamed for the deaths at sea — and now we’ve had over 2,000 of them this year, alone. I think they’ve decided the second is worse than the first, so now they’ve committed a lot of resources to dealing with the problem.”

Malta, where MOAS is based, was unhappy with the number of immigrants coming to the island. Joseph Muscat, Malta’s prime minister, even ran on a platform to stop immigration. Ostrovsky says that as a result of MOAS, and the acceptance of the simple idea that people need to be rescued at sea, Muscat has shifted his position.

“I think that what private individuals do is very important, but I, for one, think that states should not abdicate their responsibilities on this issue,” Muscat recently said.

European government boats had traditionally stayed near the European coast. But starting this summer, a few countries, like Malta, have been sending their ships much farther, out to the African coast. But work still needs to be done.

“[Musat] has warmed up to MOAS and to the idea that people need to be rescued at sea,” Ostrovsky says. “And he’s making these very nice sound bites to us and to others about the humanitarian crisis that is afoot. So if he could make that change, then I think other European leaders can make that change, too, and need to make that change. “

The onus on Catrambone is now to not let up the pressure, says Ostrovsky.