Aina from Sri Lanka looks through a window of a playhouse while she and her fellow preschoolers wait for the start of the Saint Lucia pageant. The midwinter festival of Saint Lucia is observed throughout the country and celebrates the bringing of light in the darkness.

Sweden is well known for being one of the most welcoming countries for refugees.

In 2014, the country accepted more than 30,000 applications for asylum. To put that in perspective, the UK, six times the size of Sweden, accepted only about 10,000 asylum applications. But there's a bigger picture. That same year, according to the United Nations High Commissioner for Refugees, Sweden recieved about 436,000 applications from stateless people.

Today, asylum seekers wait up to six months before the Migration Board will be able to look at their application. And that's just the beginning of the process. Applications face lengthy investigations before being put on hold for a final decision. Until then, families are stuck in a state of unknowing. They are safe, but could hear any day that their application has been denied.

Photographer Linda Maria Thompson decided to document these families' experience in her project "In Place of Memory." Thompson infuses her project with a personal touch, as she is both a native of — and immigrant to — Sweden.

"Nearly all of the families I photographed throughout the past three years have been denied asylum," she said in an email. "Some have already been forced to leave. Beyond the gripping accounts of Taliban executions and bombed buildings in Syria are universal desires for survival, pursuit of happiness and security for coming generations. But for many, these hopes are uttered delicately, as they wait for decision on their applications for asylum." 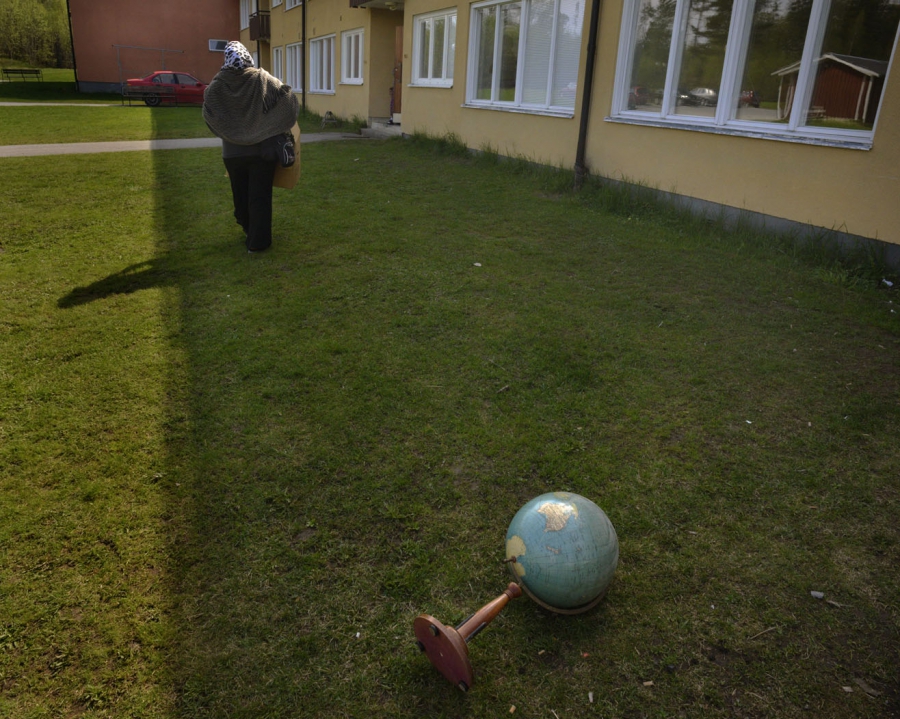 A scene outside of the Swedish Migration Board’s housing for asylum seekers in Veda. Many apartment buildings that once stood empty due to steady depopulation in northern Sweden are filled again with families from all over the world.

Kierran Petersen: Refugees have been in the news a lot lately as a staggering number of families attempt to make the dangerous journey into Greece and Italy. What is the experience for those trying to make it to Sweden?

Linda Marie Thompson: I first started photographing minors seeking asylum in Sweden about 12 years ago, and more recently have been drawn to families. Some arrive to Europe by plane after hefty fees to human smugglers, but most have come via a dangerous network of human smugglers via boat, trucks etc. I have met teenagers who have clung onto the undercarriage of semi trucks or have been packed into overcrowded semi trailers without proper water or food. Mothers who held onto their children, petrified of drowning the way that so many have recently. Their stories vary of course in the details of their journeys but share a universal undercurrent of desperation and horror. 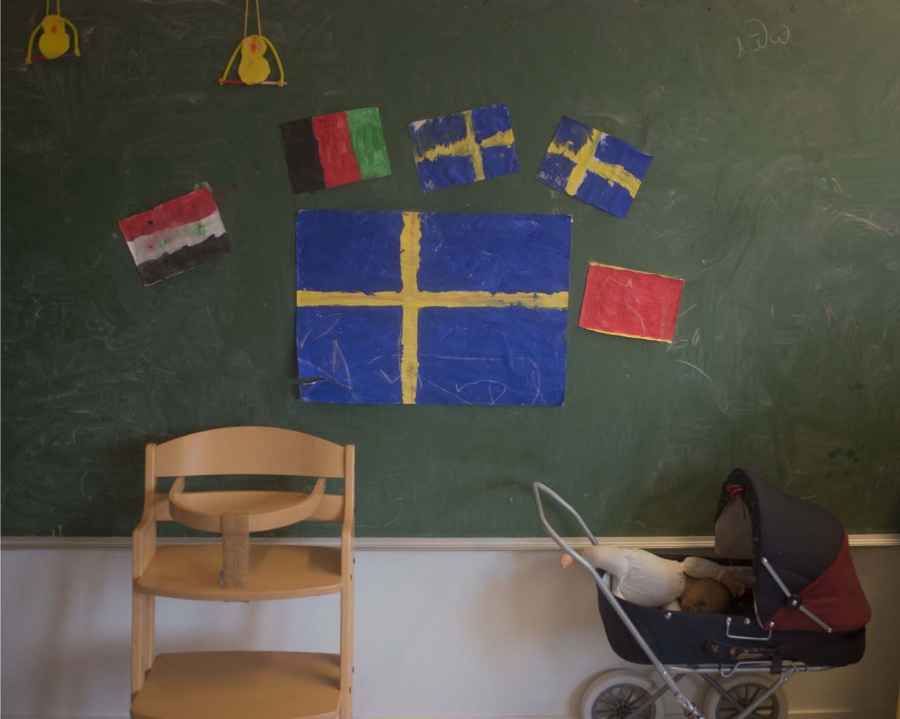 Flags reflecting some of the backgrounds of children at the Vårö cooperative preschool in Utansjö.

KP: What first got you interested in this topic?

LMT: I have long been interested in themes of identity and place and the topic of migration evident in many of my projects. I was born in Sweden, raised in the US, and now live in Sweden again. My situation has always involved the luxury of choice and I cannot claim to fathom the trauma that is involved with becoming a refugee, but I have always been drawn to other "outsiders.” I am both an immigrant to and a native of Sweden and that gives me a unique perspective as a photographer working with themes of migration. 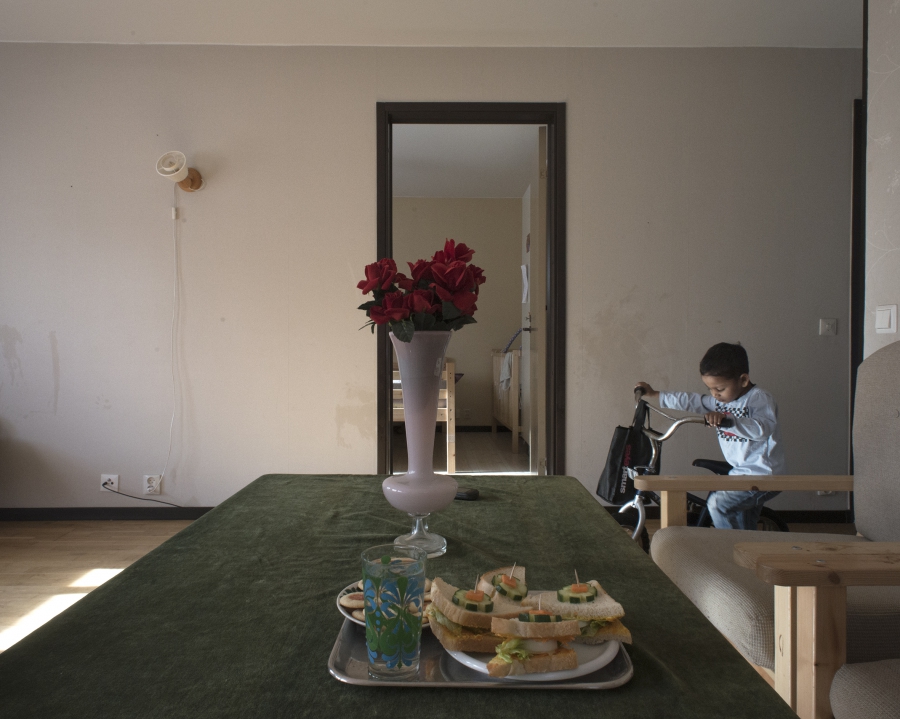 KP: Your project — "In Place of Memory" — reflects on the migrant experience. You’ve said that once these families arrive, there is a entirely new set of challenges facing them. How do you illustrate these challenges through photography?

LMT: When photographing, I try not to think too much at all. I try to see what is happening around me and make images that resonate emotionally rather than illustrate an idea or concept. I think a lot about how we as individuals relate to place in terms of identity, and look for symbols and connections that are universal. 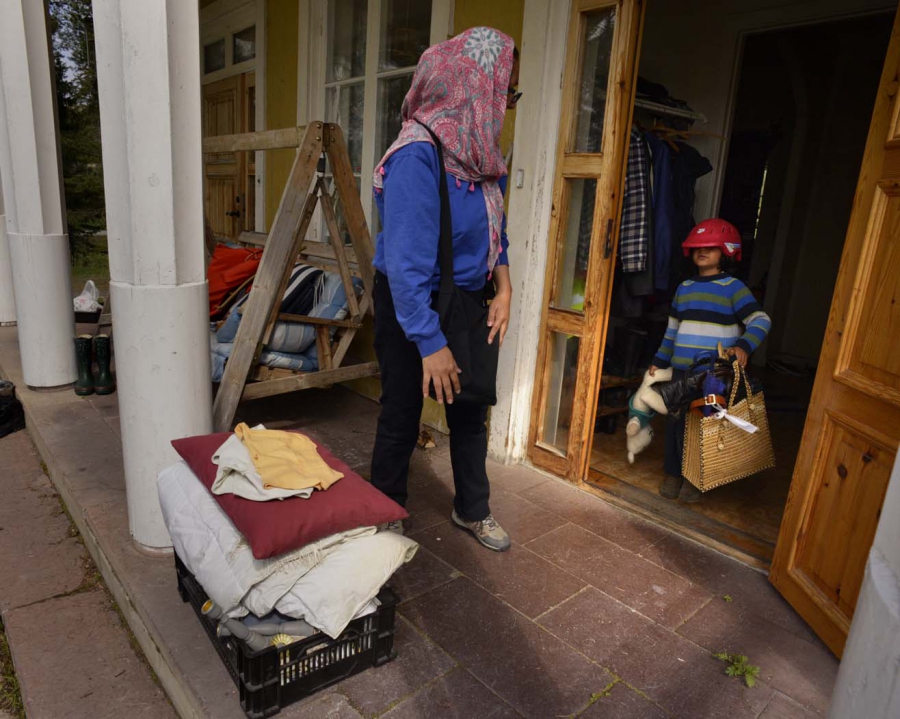 A family from Palestine carries second hand items from a local villager’s home. A widower in his 80s (not pictured here) opened his home to refugees to come and pick through unwanted items.

KP: You’ve said that for many of the families you photographed, their hopes for happiness and security are unsure as they wait on the results of their asylum applications. How long are these families waiting? Months? Years? How does that uncertainty manifest itself in their everyday lives?

LMT: Several families that I have been working with have been waiting for years. They are denied, they appeal, they wait, they are denied, they appeal until they run out of appeals. Even those coming from Syria, who have been guaranteed by the Swedish government to receive residency here must wait (some years), as the Swedish Migration Board has been unable to quickly respond to the current caseload. One woman from Afghanistan, whose mother was killed by the Taliban, is hopeful each time there is a chance for appeal, but becomes more depressed, anxious and withdrawn with each rejection.

I first met her family in 2012 and her children are now fluent in Swedish and attend school here and another daughter was born here last year. They have nearly exhausted all of their options and the situation is desperate but I am constantly amazed by her strength and her efforts to keep some sense of normalcy for the children during all of this. 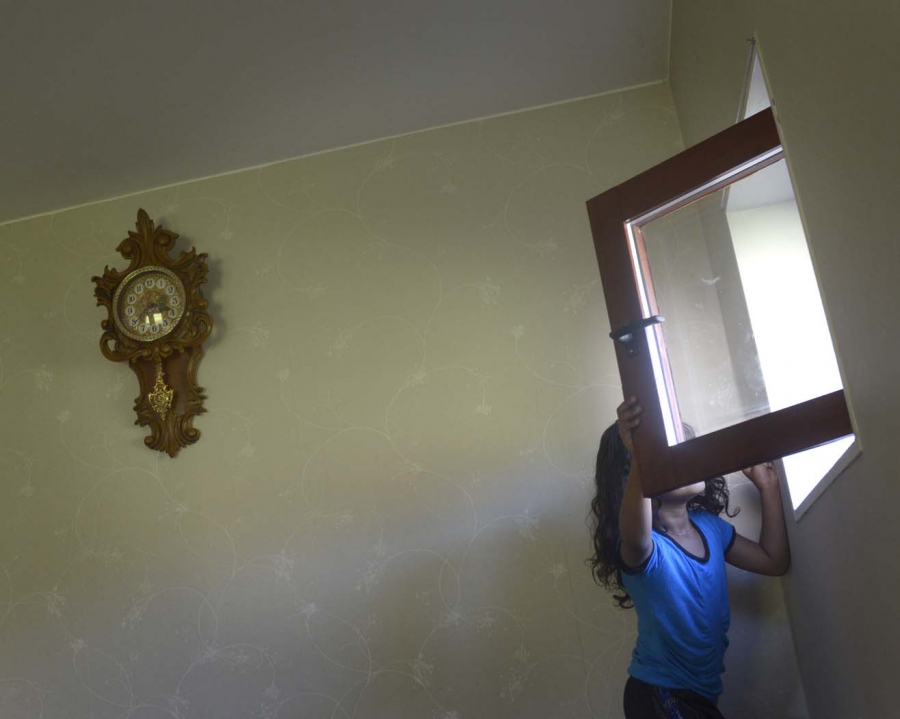 More than three years ago Shadiya came to Sweden as a toddler with her family from Sri Lanka. The family’s applications for asylum have been denied and the family now waits for notification to leave the country.

KP: An interesting aspect of this project is your own personal tie to immigration and identity issues. How do you think your journey to come to terms with your own identity has influenced this project?

LMT: "In Place of Memory" takes place in the area where I spent idyllic summers visiting my grandparents in northern Sweden. The place became even more important to my family after my grandparents died in an airplane crash after visiting us in the US in 1994. After moving back to Ångermanland, I began photographing in the rural areas I knew as a child that had recently become home (if temporarily) to more than 150 people seeking asylum.

The project is not only about people who move to these villages, but also the people who have always lived there, about the land gone fallow and silent factories left behind due to urbanization and globalization. Each photograph is an investigation of how memory, identity and place are manifested in photographs. It has been an interesting journey concentrating on these themes while becoming a mother. The project is a self-portrait and maybe also a letter to my daughters who may someday also question where they are from. 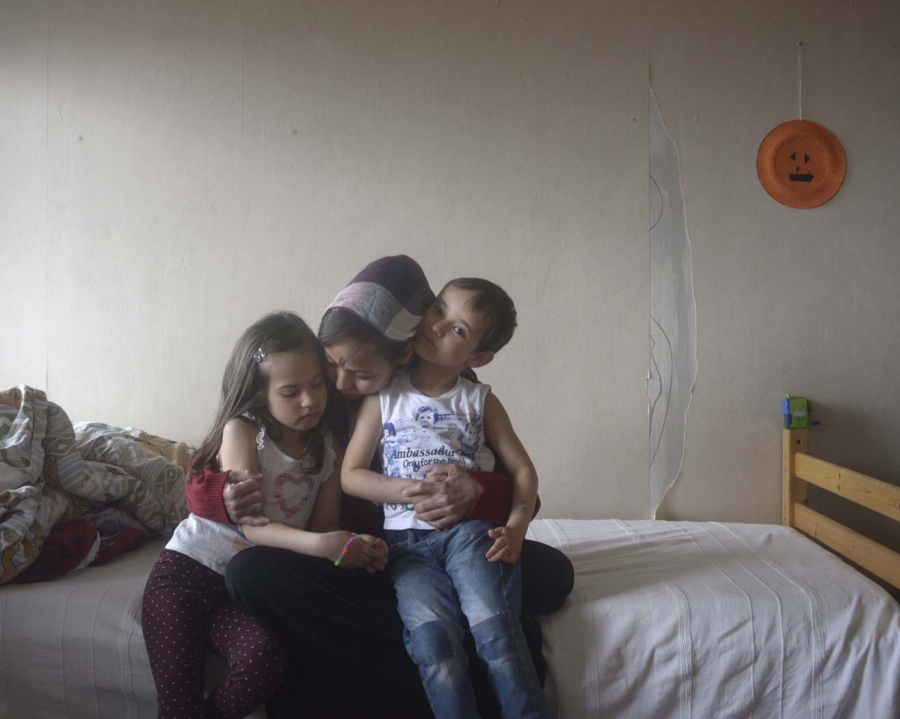 Humaira with her children Bayena and Zubair live in housing provided by the Swedish Migration Board. The family arrived in Sweden in 2011 from Afghanistan and are awaiting final decision on their application for asylum in Sweden.

KP: What surprised you about these families’ experiences, especially when compared to your own? What have you learned?

Having worked many years as a newspaper photographer has strengthened my belief that everyone has a unique story — some filled with deep sorrow and trauma, violence and shockingly horrifying experiences. I feel honored to be on the listening end of these and other less dramatic stories. The same is true with 'In Place of Memory'. What is maybe most surprising (and most controversial!) is how similar we are. It may sound trite, but I am more convinced now than ever that we humans are more similar than different. So much of the discourse surrounding migration is highly polarized where immigrants become stereotypes instead of individuals, but people have always been in a state of migration.

My husband and I chose to move back to Sweden for many reasons, one of which was that it was the best choice for us economically for our future. The desire to survive, provide for your family, create a safe future with opportunities – these things are universal. It was not all that long ago that one fifth of the Swedish population (many of them economic refugees) emigrated to North America in pursuit of ”life, liberty and the pursuit of happiness." 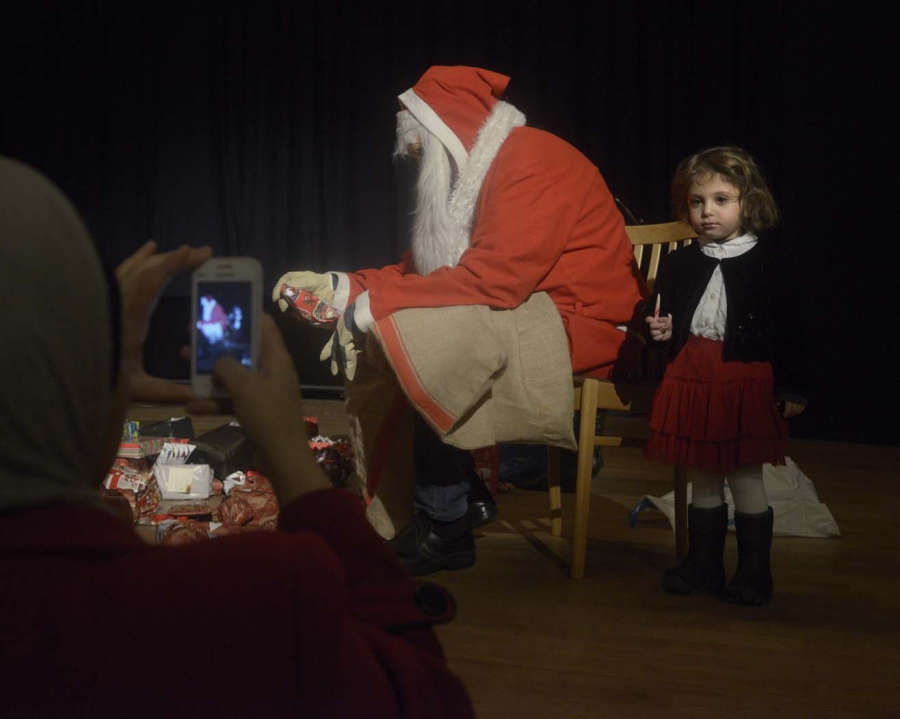 A Swedish Christmas tradition of handing out gifts becomes a photo opportunity for a newly arrived family from Syria. 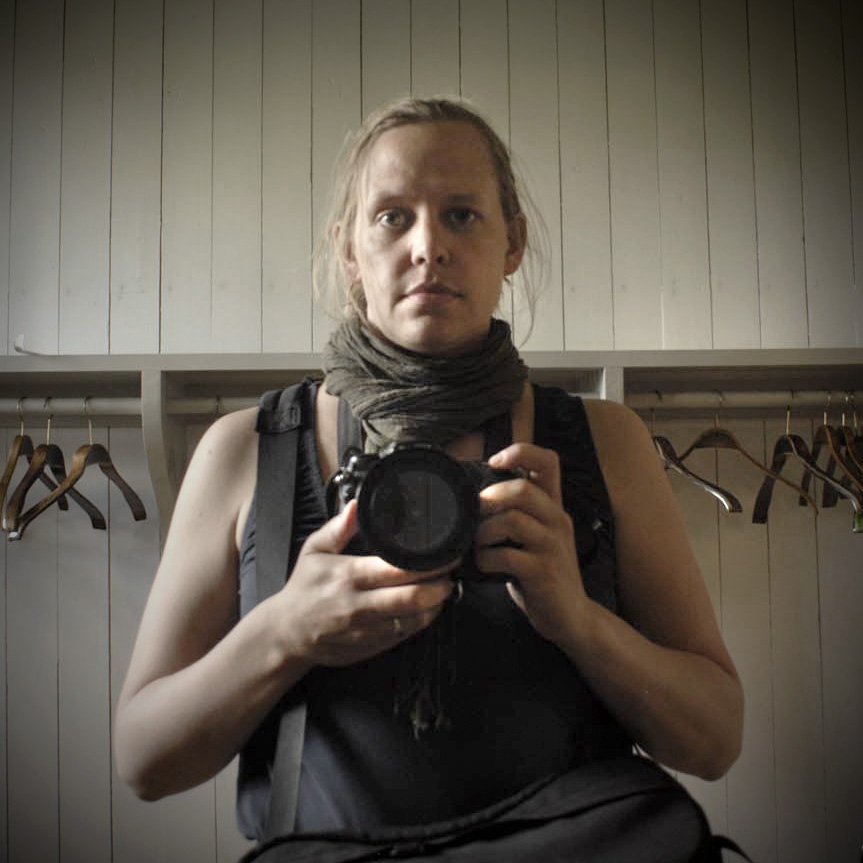 Linda Maria Thompson is a Swedish-American photographer based in Ångermanland, in northern Sweden. Her work explores questions surrounding transience and impermanence on both a personal and political scale. To see more of her work, follow her on Instagram or check out her website.