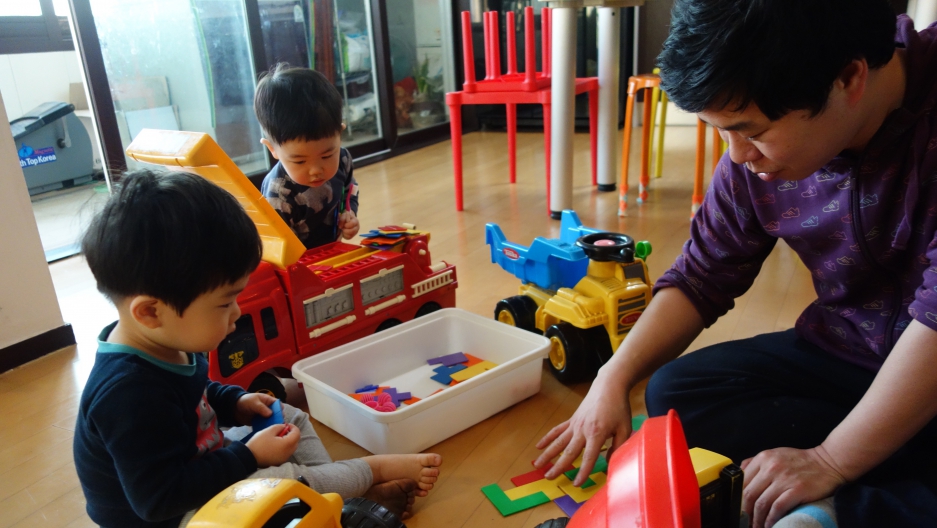 Stay-at-home dad Wonhoe Bae with his two boys in their apartment in South Korea. He does all the childcare, meal planning and manages the home.

Wonhoe Bae is a stay-at-home dad with two little boys — ages 2 and 3. He’s at the kitchen counter, slicing a mango into toddler-sized pieces. His wife, Joo Hyun, beams, as this is no easy feat for a man in Korea.

“In Korean society, they say that if a man even steps foot in the kitchen, his penis will fall off,” says Joo Hyun. “But my husband, he doesn’t just cook, he also does housework, the meal planning and he watches the kids all day long.”

It’s such an unusual setup, she doesn’t even tell everyone about it. Before the couple got married, Joo Hyun had assumed she would stay home with their children. But the challenges of being home with two active boys caught her by surprise. When she started to show signs of post-partum depression, the couple reconsidered their plans.

Typically in Korea, grandmothers are tasked with childcare. But as more and more couples are putting off childbearing, many grandparents are getting older, and aren’t able to help out. At the same time, daycare spots are hard to come by, and the centers are often understaffed, with cases of abuse frequently the subject of headline news. So now nearly half of Korean women leave the workforce to be home with the kids.

More significantly, both Wonhoe and Joo Hyun saw the early years of development as critical. “You only get to do this once,” Wonhoe says. “I thought, couldn’t we prevent some of the issues later in life — in the teenage years and beyond? If I started to build trust with the kids now?”

His wife Joo Hyun also points out that her husband is so much more physical and better able to keep up with two active toddler boys.

It’s been a year since Wonhoe left his job at a large biotech company, and his wife returned to her job as a teacher. He admits he was worried about the loss of income. His job in biotech paid more than hers as a teacher. “But we weighed the costs, and the amount of money we’d lose, we thought we’d gain more by having the time to spend together as a family. As a father, this was worth it.” 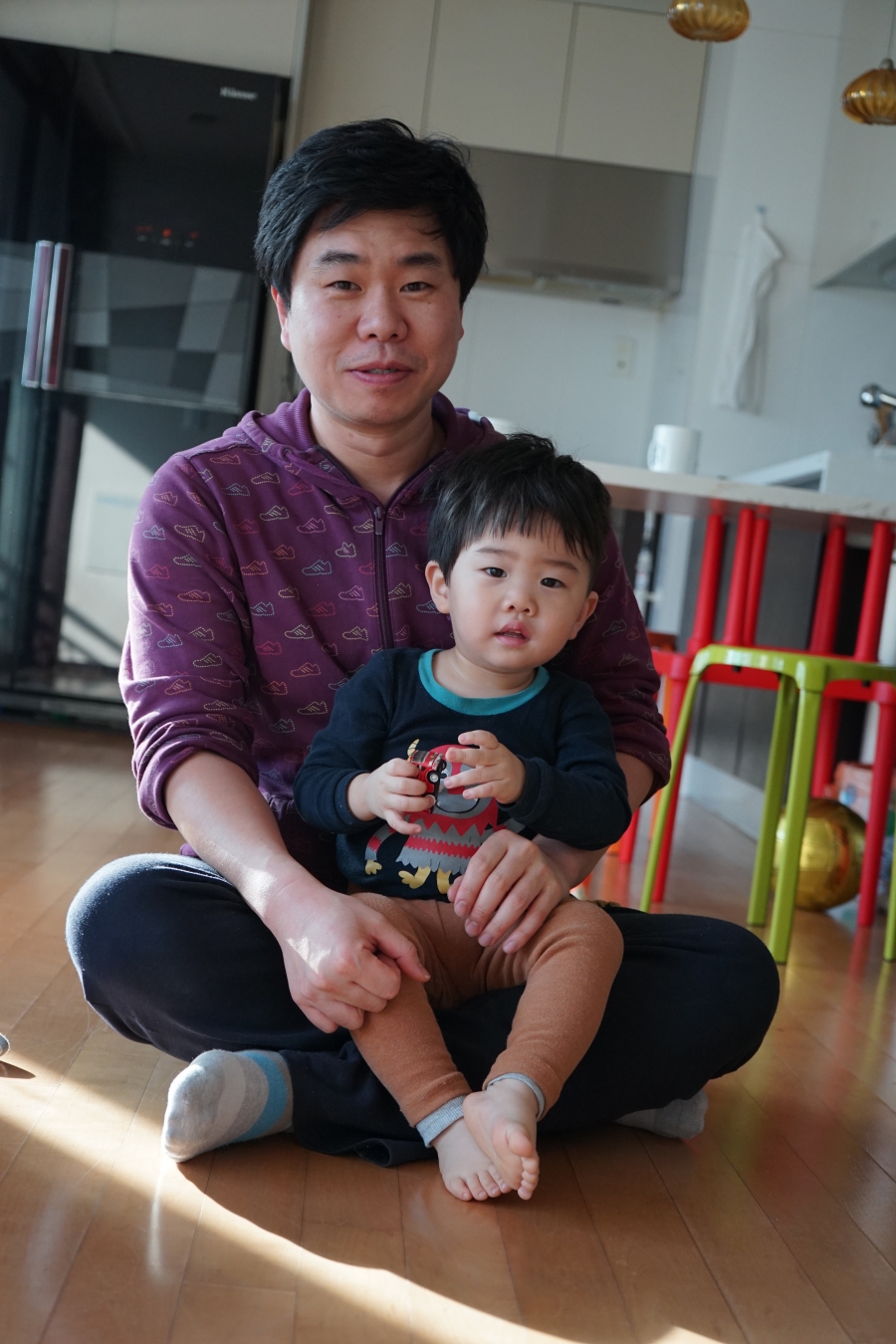 Wonhoe Bae and his son.

In South Korea, paid paternity leave — and a generous policy at that — is guaranteed by the Korean government. But it’s common for men to be fired, just for requesting to take this leave, despite the law. But Wonhoe was bold enough to take the risk, and to become a stay-at-home dad.

As he expertly pulls the boys into his lap, calms their tantrums, and washes their sticky hands, it’s quite a different picture from his own childhood.

“I hardly saw my father when I was little,” Wonhoe says, “because he was working all the time. In the evenings, he was drinking with friends. But he did change eventually, when I was much older — in high school or college.”

In patriarchal Korea, fathers have been notoriously uninvolved. Many work until 10 or 11 at night, and don’t go near a diaper or a stroller during the week.

Wonhoe takes his boys to a local playground nearly every day. The neighborhood moms gather on the benches to chat and swap parenting strategies. But Wonhoe, who chases his boys up the slide instead, says the mothers don’t know what to make of him.

“Sometimes a mom will ask the boys, ‘So who are you here with?’ When they point to me, she’ll look surprised and shuffle away.” He adds, “In Korea, it’s still not that easy for men and women to talk like this.”

There's one place he looks to for help and for parenting advice — the Internet. “There are these chat rooms where a lot of moms tend to meet.” But he admits, “You’ll see that many of these sites won’t let me register as a dad. They only let women in.”

The family gathers for dinner every evening — a rarity in Korea where men work such long hours. Their home is chaotic and warm. In something that’s completely familiar in many parts of the world but unusual in Korea, Wonhoe and Joo Hyun tag-team in their parenting. They debrief their days and trade off getting teeth brushed and books read.

“Our family, my husband, I know we’re not the norm,” Joo Hyun says, “but instead of being the exception, I wish we were the norm.”

Wonhoe adds, “Parenting is hard. When I’m with my kids, I see my own flaws, and how I need to change. So I have new respect for my own mother. I wish that all Korean dads could experience this, just for a year or two.”

Now with the boys heading off to kindergarten soon, Wonhoe is strategizing his next steps. He plans to launch a start-up of his own, he says, which will, of course, offer flexible work schedules and paternity leave.