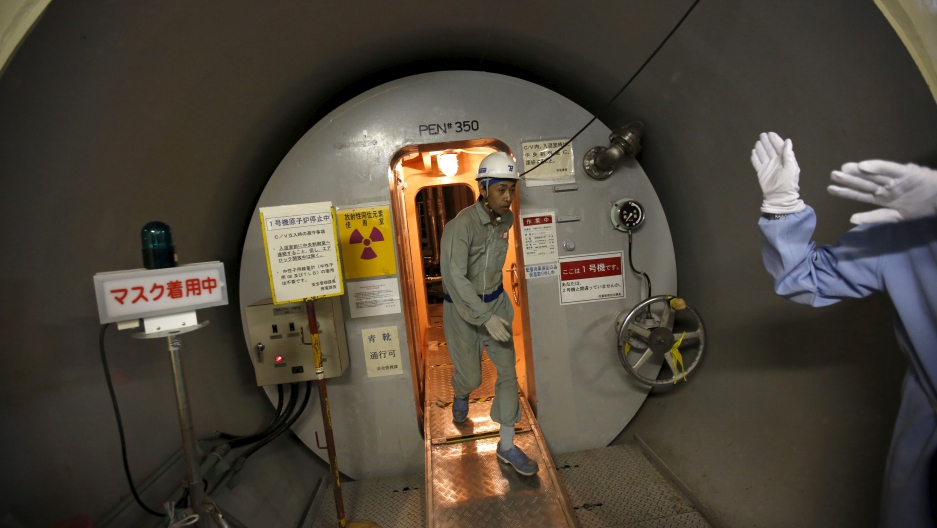 An employee of Kyushu Electric Power Co. walks through a gate of the reactor vessel inside the No. 1 reactor building, where fuel rods are inserted into the reactor vessel at Sendai nuclear power station, in Satsumasendai, Kagoshima prefecture, Japan, July 8, 2015.

Japan has dozens of nuclear reactors — but four years after the earthquake and tsunami that caused meltdowns in Fukushima, none of them are generating electricity.

Officials have restarted the Sendai nuclear power plant in southern Japan, despite protests.

The controversial decision is all about economics, says reporter Naomi Gingold. “The fact is, Japan is a country with limited natural resources,” she says. “They’ve been importing a large amount of expensive fossil fuels.”

They've also made it difficult for utility companies to stay afloat. Last year, the company responsible for the Sendai reactor, Kyūshū Electric Power Company, had to be bailed out by Japanese banks. Before the shutdown, nuclear plants provided 30 percent of the Japan’s electricity.

“They say when the reactor goes on tomorrow and starts producing power,” says Gingold, “they’re going to save somewhere in the vicinity of $60 million per month.”

Not everyone is happy about the re-opening, however. Gingold says 2011 anti-nuclear demonstrations were among the largest Japanese protests in 50 years.

The Japanese government first closed its nuclear reactors in 2013, in order to tighten nuclear regulations.

Critics say those regulations don’t go far enough. Japan records more earthquakes than any other country — and the reactor that opens tomorrow is 60 kilometers, less than 20 miles, from an active volcano. Anti-nuclear activists say Japan’s nuclear power plants are too old and too unreliable.

It’s also a strange moment to start re-opening nuclear reactors, Gingold points out. This month marks the 70th anniversary of the dropping of atomic bombs on Hiroshima and Nagasaki.

In the wake of Fukushima, many countries, like Germany, began scaling back their nuclear programs. Japan’s need for domestic electricity might make similar policies difficult to achieve there.

But the wider movement to phase out nuclear power in Japan hasn’t disappeared. Local protests were held near the Sendai reactor Monday, in advance of its re-opening.

“People are uneasy about this across Japan, not just in the local town,” Gingold says.