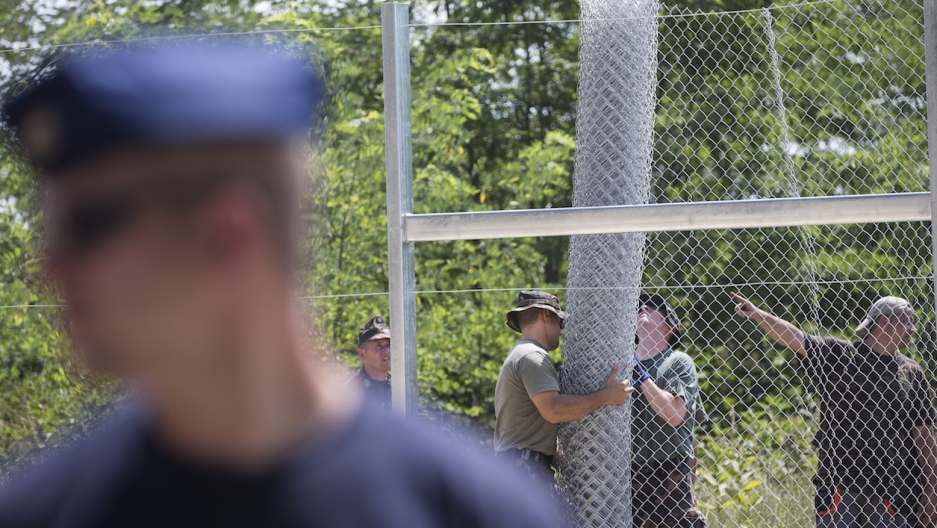 Hungary's military is building a fence along its border with Serbia.
Credit: Arpad Kurucz
Share

KYIV, Ukraine — What do you do when migration to your country doubles in a year, freaking people out about some kind of existential threat to you or your continent?

If you’re Hungary, you build a 13-foot-high, 110-mile-long fence along the border with Serbia to patch that problem right up.

By the end of the month, soldiers are expected to finish construction on the controversial project, which officials hope will stop migrants from illegally entering the central European country. Hungary reports receiving more than 100,000 migrants so far this year, way up from around 43,000 who came across its border all of last year.

GlobalPost update: Hungary’s border fence is not working too well

The vast majority are refugees from the conflict-ridden Middle East and Afghanistan. Yet that's only fueled official rhetoric that migrants are a danger.

“As a matter of fact, the Hungarian border is the European border,” Zoltan Kovacs, a government spokesman, told PBS NewsHour recently. “So when we are protecting the borders of Hungary, we are at the same time protecting Europe.”

As Europe struggles to grapple with more migrants, Hungary's leader is telling his people they are the defenders of an allegedly embattled European and Hungarian identity, says Marta Pardavi, a human rights activist in Budapest.

But, she adds, the new fence is also a message to the rest of Europe that Hungary is rolling up its sleeves when no one else is. At least that’s how Orban sees it.

“Hungary has decided to go at it alone and to take a series of very strong steps to protect itself and, indirectly, Europe,” said Pardavi, co-chair of the Hungarian Helsinki Committee, speaking about the official line.

The fact that Hungary is a major transit country helps bolster this message. The so-called Balkan route, which begins in Turkey and leads through Greece, Macedonia and Serbia before ending up in Hungary, is a popular way for migrants to get to Europe.

But here’s the thing: Of the more than 100,000 who have filtered through this year, only around 6,000 migrants currently remain in the country, researchers estimate. And most of those are likely to quickly move on.

That’s raised questions over whether Hungary itself is actually as threatened by immigration as the authorities claim.

The country has only granted formal refugee protection to 4,000 people in around 15 years, the human rights activist Pardavi says.

​“It’s a challenge for the asylum system,” she says, “but it’s certainly very, very far from being the real number one domestic issue.”