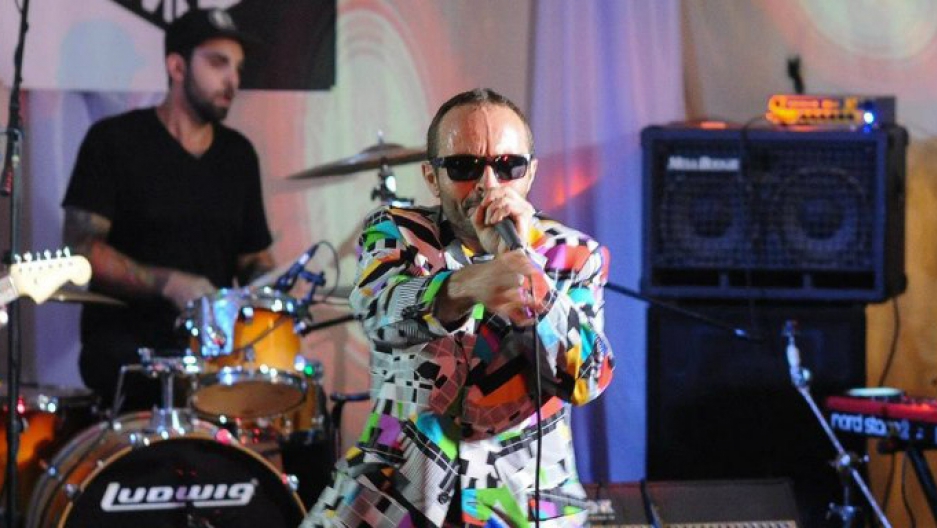 Krussia got his start in New York beatboxing because you don't need translation. "This is where you gain trust with people through sound ... without using any words,” he says.

Alex Kalnev got into hip-hip the way a lot of kids do — by hanging out at the square in the center of town, with the other kids “who were slightly different, or wanted to be different; who wanted to be punks and break dancers and just hang out and talk. Pretty much like Union Square [in New York].”

Only his park had a statue of a Communist revolutionary on a horse and was in the Russian city of Chelyabinsk.

At the time, he couldn’t really understand a lot of the American rap he heard but that didn’t matter.

“You hear things like Jimi Hendrix and you completely don't know what it is. But you feel there is a… MRGH! There's attitude and he means something. You can really feel it, you know, without English,” Kalnev says.

Years later, he was going to law school and working three jobs, but really all he cared about was hip-hop. So he decided to take a trip to New York, the city where rap was born, home to Biggie and Nas and Jay Z. His plan was to stay for six months, and immerse himself in the local hip-hop scene.

“This is where I also realized there's no key center figure. It's a vibe. It's a feeling. It’s a living, breathing thing.”

But how does a guy from Chelyabinsk hook into that vibe when his English is still a work in progress?

“My first helping stone was beat-boxing, because it was an element that didn't require translation. It’s sound. This is where you gain trust with people through sound, I believe, without using any words,” he says, “and this is how my "performance" started happening in New York.”

And that’s when “Krussia” was born.

When he first started slipping Russian rap into his beat-boxing, it took people by surprise. Rap is incredibly popular in Russia — President Vladimir Putin even made a guest appearance on a Russian rap show.

But most Americans have never heard anyone rap in Russian. Or even know it’s a thing.

“When you find yourself in East New York in like 2005, free-styling, rhyming verses on street corner in front of a bodega, there are no Russian people and they hear some weird language,” he says. “It was like fun for me to rhyme just a capella to someone beat-boxing on street corners.”

He was also kind of living on street corners, at least sometimes. Those six months turned into 13 years and for 10 of them, Krussia was a ghost (his words) — undocumented, doing day jobs, in construction and as a mover.

“I just remember when I was still working in a moving company and there was just a moment when [I] didn't have nowhere to go — [I] had nothing and nobody to talk to,” Krussia says. “And that's it — [I was] living in a truck.”

But he says he knows he’s different from other people who were homeless. “I came here myself. I wanted the hip hop. I wanted the rock n roll.”

Today he’s got a job, an apartment and a visa. And VICE Magazine has dubbed Krussia “New York’s best Russian Rapper.” This past June he released his fourth album, Crash and Flow.

Sometimes he still can’t believe it: “All those moments, finding yourself in a basement in East New York, surrounded by, like, Masta Killa and GZA, and they don't know who you are but they just there and you’re this weird Russian kid. It felt already like I'm already in the movie,” he adds, laughing.

But I wonder, given all he’s achieved here, why not go back to Russia for a victory lap, do some touring, and make some money? I figured the best Russian rapper in New York must be huge in Russia.

But back home? He’s virtually unknown.

Krussia says in the years he’s been here, his hyphenated, hybridized Russian-English rap has evolved into something that’s more New York than Moscow. And for him, there’s really no going back.

“You can find a piece of Russia in New York, but you cannot find New York in Russia, I feel like that,” he says.

One thing you can say: Krussia stands out. And in the increasingly globalized world of pop music, it’s no longer so hard to believe “that something in a different language is possible and might be interesting.”

Hey, American music crosses over all the time. There’s already a global pop star from South Korea — so how about a Russian Tupac?

"In the same way we felt about Gangnam Style," Krussia says. "[We] don't know what it is, but it works."

A previous version of this story misspelled Alex Kalnev's name.