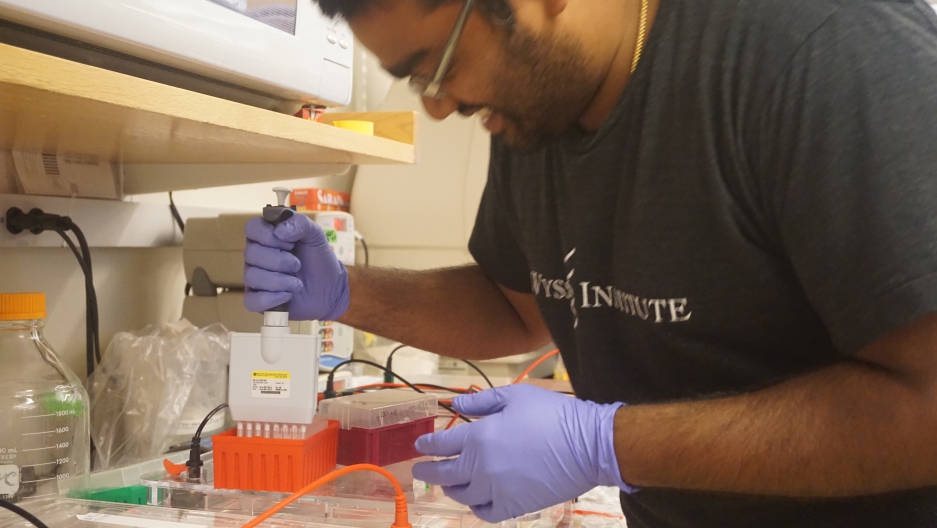 Postdoctoral fellow Raj Chari at work in one of George Church's lab at Harvard Medical School. (Editor's note: This is not the film encoding procedure at this moment.)
Credit: Emilie Munson
Share

BOSTON, Mass. — What if all the information on the internet could be stored in a drop of liquid the size of a quarter? What if billions of copies of that information could be made in minutes? And what if it were guaranteed that all that information would be safe not just for your lifetime, but for millions of lifetimes?

To Harvard genetics professor Dr. George Church, it sounds like the future.

Church is one of the world’s premier DNA scientists. He made headlines recently for his research attempting to bring the wooly mammoth back from extinction.

His many contributions since the 1980s include developing anti-cancer nano-robots and detectors for dark matter. Somewhat farther afield, Church's team optimized CRISPR  (a technology to cut and paste DNA) to work in human cells; the technique enables therapeutic removal of undesirable parts of chromosomes, among other applications.

Now, Church is focused on doing something no other scientist has succeeded in doing: coding a film onto tiny strands of DNA.

New pursuits for an old hand

A towering man of six-foot-five, with a full white beard, Church enjoys turtle-breeding, choir, skating (“ice and asphalt”), mineralogy and volunteering as a subject for human experiments, according to his bio. Outside of his unusual extracurricular activities, Church has a history of exceeding expectations in academia. He completed his bachelor’s degree from Duke in just two years, and began studying RNA, the molecular director of an organism’s protein production, as a student in 1973. “I’ve been trying to read and write nucleic acids since I was a teenager,” Church explains of his interest in genetics. In 1977, he started a PhD at Harvard. Church and his Harvard mentor, biochemist and Nobel laureate Walter Gilbert, published the first genome sequencing method just seven years later.

Using DNA to store precious data is a more recent pursuit. In October, 2012, Church succeeded in coding 70 billion* copies of his book, "Regenesis," onto DNA — carefully converting each letter of his writing into the alphabet of DNA: four chemical bases that combine to form every nuance of the human genome.

He debuted this achievement on the Colbert Report, handing Stephen Colbert a slip of paper on which millions of copies were contained in a tiny dry* spot. Colbert, hilariously, tried to eat it.

After the success with his book, Church decided to take his research one step further.

Funded by film industry giant Technicolor, he is attempting to code “A Trip to the Moon,” a 1902 French silent film. Inspired by the Jules Verne novel "From the Earth to the Moon," it’s widely considered the first-ever science fiction film.

The DNA that Church is using to store “A Trip to the Moon” is different from that found in living organisms. Instead, it is “unnatural DNA,” crafted to be denser and more robust, perfected for storing high quantities of information.

The process of coding the film to DNA is fairly complicated, but in simple terms, it goes something like this:

Every movie image is made up of hundreds of tiny pixels, each of a specific color. Church assigns each pixel a code made up of zeros and ones, for example 001001, based on its color. This code is then converted into adenine (A), cytosine (C), guanine (G) and thymine (T), the chemical bases that make up DNA.

The film’s audio is similarly broken into tiny info-bytes, assigned a numerical code and then converted into DNA base pairs.

More from GlobalPost: The quality of this 8K YouTube video is so good you probably won't be able to watch it

Church then carefully labels each DNA strand with a chemical index that tells where the pixel or sound belongs in the movie. In this way, a computer program can order the millions of DNA strands representing all the pixels and sounds of the film so that the film can be recreated.

Once these strands of DNA are produced, Church can easily make many copies — billions even, as he demonstrated with his book. The DNA containing the film will be about the size of a small speck of dust.*

All that is necessary to read the DNA and return "A Trip to the Moon" to movie form is a DNA sequencer — a dishwasher-sized instrument that spins and sorts the strands — and a computer. Simple.

Don’t anticipate that DNA will be replacing your DVDs anytime soon.

“It’s a baby technology,” Church explained. “We don’t want people to get expectations too high.”

Its value, in the near future at least, lies in archiving.

Current data storage is sometimes faulty and unreliable. Archived information is commonly kept on huge spools of magnetic tape in robotic libraries, according to data storage consultant Tom Coughlin. These archives must be backed up every four years or so, in a time-consuming and risky copying practice.

“Is there a danger of losing data at this time? The answer is yes,” Coughlin wrote in an email. “We have no digital storage media/technology which will last for hundreds of years.”

Don’t anticipate that DNA will be replacing your DVDs anytime soon. Its value, in the near future at least, lies in archiving.

“We’ve been exponentially storing more and more data on devices that are fragile,” said Church. “Any company that is doing archiving is worried. They are worried that they will be the one that finally messes something up.”

This is where Technicolor comes in. The company is now exploring how DNA archiving can become part of its work with its customers, the film studios.

“Data storage is certainly a challenge for our customers,” explained Director of Research and Innovation at Technicolor Jean Bolot. “The ideal ‘future proof’ technology is top of mind for the industry.”

Technicolor is employing over 250 researchers around the world to work on this project. Its teams are focusing on coding and media aspects of the technology, while Church is spearheading the biology.

“The technology is not ready to hit mainstream yet,” said Bolot, “but we do expect it will get deployed, and it will indeed significantly change movie archiving in the future.”

The perks of DNA Although other scientists are testing materials like synthetic polymers and fused quartz crystals for data storage, Church is convinced that DNA is the solution to the world’s archiving problem.

In addition to its miniscule size, DNA lasts for up to 700,000 years without proper storage. With proper storage, it can endure for millions. Therefore, information stored on DNA would not have to be re-saved every few years like current data storage methods require.

Other advantages of DNA data storage include its ease of copying — billions of copies of DNA can be reproduced quickly and cheaply.

“There is no other polymer that would be a priori cheaper to manufacture or easier to program than DNA,” said Church.

Still, the cost of DNA technology is dropping rapidly. From 2001 to 2015, the cost of sequencing DNA has dropped from $100 million per genome to less than $10,000 per genome, according to the National Human Genome Research Institute.

For Church, DNA data storage is a little science with big possibilities.

“I don’t know where it’s going. Like I said it’s a little baby, you don’t want to put too much pressure on it. But it could do some wonderful things.”

Church is within a few months of finishing coding “A Trip to the Moon” to DNA. At present, he has successfully coded over ten percent of the film and is quality-checking that portion to ensure a flawless result.

And what will Church do with the DNA copy when he is done?

“I would like to shoot it to the moon,” said Church, “the way Jules Verne envisioned.”

* Editor’s note: This story has been updated to correct the following: The number of copies of his book coded into DNA was 70 billion, not 20 million; millions of these were contained in a tiny dry spot (not liquid) on the paper he handed to Colbert. The DNA containing billions of copies of “A Trip to the Moon” will be the size of a small speck of dust, not smaller than an atom. And it was an MIT lab, not Church’s Harvard Lab, that used  CRISPR to cure mice of a rare liver disease. We regret the errors.