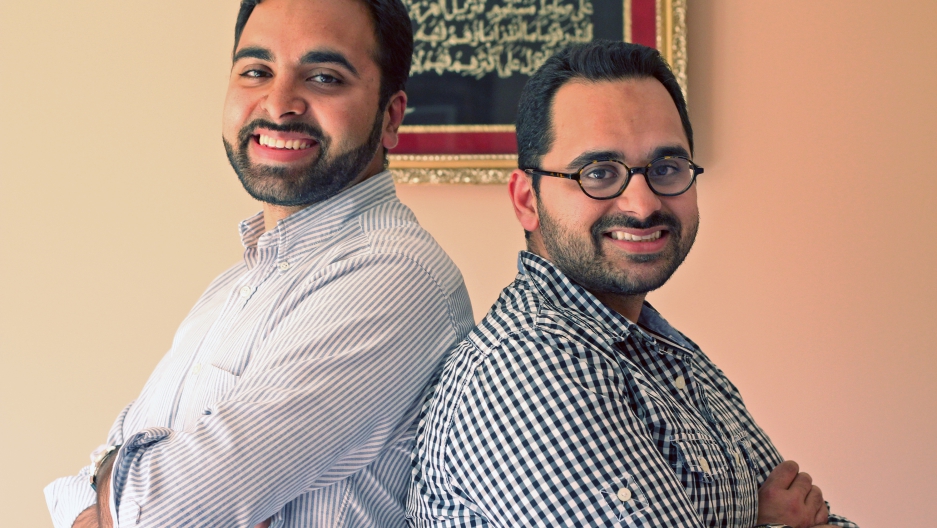 Amin Aaser, left, and his older brother, Mohammed Aaser, in their parents' home in Maple Grove, Minn. Growing up in Maple Grove, Amin Aaser was bullied after 9/11. Now 27, he and his brother are trying to help young Muslims build confidence in their religious identity by creating children's books just for them.

Amin Aaser didn't need to look farther than his own Minnesota childhood to inspire his series of children's books.

The stories are set in a town called Maple Grove, named after the Minneapolis suburb where he grew up. And one of the main characters is a charismatic panda bear — also named Amin.

Amin Aaser, 27, along with his older brother, Mohammed, got the idea to create children’s books at the family’s kitchen table about five years ago, when their sister announced she was pregnant.

"The three of us began reflecting on our own childhood, about what it was like to grow up as a Muslim in North America," Amin Aaser said. "That's when the light bulb went off. We said there's no way we want Aasiya, my sister's daughter, to experience the same challenges as we did."

Their series is called "Noor Kids." Noor means "the light" in Arabic, the brothers explain, as if to illuminate the way for young Muslims.

The brothers both have impressive business-school pedigrees. Mohammed, a consultant, graduated from Harvard; Amin, who worked on the corporate side of Target and General Mills, is pursuing his MBA at the University of California, Berkeley.

But growing up Muslim and as the children of Pakistani immigrants had its share of rough moments, including a painful backlash following the 9/11 terrorist attacks.

At the time, Mohammed Aaser was a 16-year-old kid working at a computer store. "I still remember there was a lady who came in," he recalled, "and she said, 'I can't believe you guys have someone named Mohammed working here.' And she went to the manager in front of the store and said that: 'I'm never going to shop here again.'"

Amin Aaser was just 13 when the planes struck the World Trade Center.

A friend turned against him and started bullying him online. During Ramadan, he'd head to the library instead of the lunchroom so other kids wouldn't notice he was fasting. And when Little League season came, he begged his mom to wait to pick him up until the games were long over, so other kids wouldn't see her headscarf.

Looking back, he realizes he was ashamed of his identity. "It wasn't about how other people thought about Muslims," he said. "It was about how I, as a Muslim, thought about myself."

It's a struggle his brother Mohammed can relate to:

The brothers answer with an emphatic yes. When they set out to create kids’ books, they wanted to reclaim the story of American Muslims and the values the religion teaches.

But the most basic desire was to offer something they rarely experienced as children: They wanted young Muslims to see themselves in the books they read.

“Our goal is to be the ‘Dora the Explorer’ for little Muslims,” Amin Aaser said.

The "Noor Kids" books are simple stories, intended for 4- to 8-year-olds, that explore such issues as bullying, prayer, charity and jealousy. The books revolve around four cartoon animals with Muslim names: Amin, Shireen, Asad, and Amira. Families subscribe for $25 at noorkids.com and receive four books over a year.

Now the brothers are expanding the business. After the death of their mother in December, Amin Aaser said, he thought of his own legacy. He wanted it to be about more than spreadsheets.

Amin Aaser wrote the first eight stories himself and hired artists to illustrate them. But now "Noor Kids" has expanded to include a writer and art director, freeing him to oversee the daily operations of the company.

Since the Aasers published their first book four years ago, they've sold copies to 25,000 households all over the world. In the same period, they've seen Islamic children's literature in the West take off.

The brothers say their vision for reaching young Muslims goes far beyond books. This year they launched an online summer camp, and they have plans to get into animation and mobile apps.

One topic that their series doesn't address is violent extremism in their community. Amin said that when they started the series, the books weren't made to save their young readers from that; they were made to save them from losing their identity.

"Fast forward to where we are today," he said. "Could this also help children understand what their beliefs actually are, so they can stand up against violent extremism? Yeah."