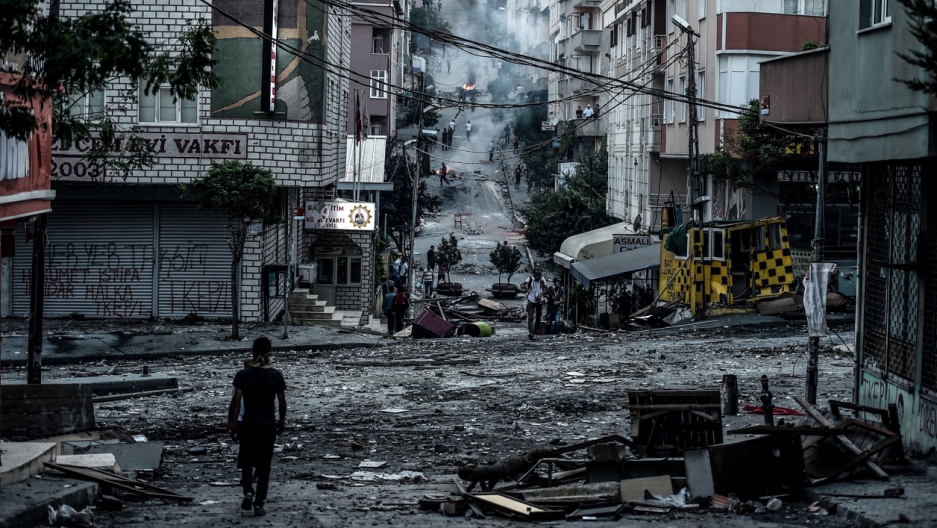 A protester during clashes with Turkish riot police in Istanbul's Gazi district, on July 26, 2015.
Share

The devastating conflict in Syria is only getting worse, drawing more countries and groups into the fight and increasing instability around the region. The latest to be sucked in is Turkey, which — after being the target of a brutal Islamic State attack late last month — was finally compelled to join the war over its border in Syria.

Days after the attack Turkey struck a deal to join the US-led coalition that is bombing Islamic State positions in northern Syria and Iraq. The Turkish government will allow the United States to use its military bases to launch attacks. And in return the United States agreed to try to enforce a zone along the Turkish-Syrian border that would be free of fighting.

The PKK and other sympathetic groups inside Turkey are now retaliating. A wave of attacks struck Turkey on Monday, killing at least nine people. In one of the attacks, a far-left group opened fire outside the US consulate in Istanbul. In a separate attack on the other side of Istanbul, a car bomb detonated outside a police station.

In the mainly Kurdish southeast part of Turkey, meanwhile, four police officers were killed when their armored vehicle was hit by a roadside bomb. A Turkish soldier was then killed after Kurdish militants opened fire on a military helicopter.

Before all this the PKK and the Turkish government had been holding to a hard-won peace agreement. That agreement appears to be all but over now.

Racial tensions are not getting any better in the United States. The unfair treatment of black people by mostly white police officers and other authority figures — fatal shootings of unarmed black men and a lopsided record of arrests and imprisonment are just some examples — has thrust the story back into the national dialogue a half century after the Civil Rights Movement.

Over the weekend, protesters marked a year since a white police officer gunned down 18-year-old Michael Brown in Ferguson, Missouri. Ferguson is a mostly black suburb of St. Louis. The killing of Brown last year sparked months of protests and a violent police crackdown that got the attention of the whole world. Myanmar, for instance, used the events to justify its own crackdown on protesters. And America's adversaries used it to question America's commitment to upholding human rights.

In response to last year's protests US President Barack Obama proposed a plan to improve policing around the country. But little else has changed. White police continue to shoot unarmed black men. Black men still make up a disproportionate segment of the US prison system. And, so far, the serious race problem in America has barely registered in debates among next year's presidential candidates.

The protests and vigils over the weekend, however, were largely peaceful. Until then end, that is, when a gun battle broke out between police and at least one man, who is now in a hospital in critical condition.

India is the fifth-largest consumer of pornography in the world. So when the Telecommunications Ministry recently banned 857 websites, many of which hosted adult content, Indians freaked out.

Many non-porn websites, like College Humor, were caught up in the bans. The internet fought back for three days, accusing a Hindu nationalist government of moral policing. The accusations were not without merit. The relatively new government has already tried to censor other forms of entertainment, and even to ban beef.

The online rage was enough to force the government to roll back the ban. The internet won its noble battle, for now.