Actor Song Il Kook with his triplets, Daehan, Minguk, and Manse. They're featured on the Korean reality show, "Superman is Back."

There’s a Korean reality show that’s giving dads a run for their money. It’s called “Superman is Back” — and it’s about celebrity Korean dads who are challenged to watch their own kids, without the help of mom, for 48 hours.

It makes you feel like you’re in Brad Pitt’s living room, watching him change diapers and teach his kids how to share. But these guys are Korean celebrities — famous hip-hop stars, comedians and actors. There’s even an ultimate fighting champion in the mix.

It’s hard to find a Korean family who hasn’t seen the show. Jung Ah and Yunjoon, who are expecting their first child later this year, watch it every week.

Related: What's this Korean man doing in the kitchen?

As the ultimate fighting champion on screen makes pancakes for his daughter, Jung Ah nudges her husband, Yunjoon: “You never make those.”

“Pancakes?” he says. “But you don’t even like pancakes!”

There’s a generation of young Korean fathers who vow to be different from their own stoic and uninvolved dads. In the past, a good Korean dad was someone who provided financially for the family — and that’s all he had to do. But now there’s a campaign in Korea called “Oht Boda Appa” — which basically means, “Be more than just a paycheck, be a dad.”

“So whenever I look at pictures in my albums,” Yunjoon says. “I only have pictures with my mom. Not with my father. The last time I took a picture with him was like, first grade? I never played with him. Having dinner with him, that was quite rare also. I don’t have any good memories with him.”

Yunjoon says he’ll be different; he’ll be involved, not just watch from the sidelines. He’ll explain things to his kids, like the dads on the show, and not just tell them how it is. But he’s not sure if he’ll be able to do it.

The problem is — Korean men work some of the longest hours in the developed world. Many don’t head home until 10 or 11 at night. Culturally it’s taboo to leave the office before your boss. And then there’s the requisite drinking with colleagues after hours. It’s not until they’re empty nesters that many Korean dads realize they’re outsiders to their own families — and they regret it.

But that doesn’t make every Korean dad a fan of “Superman is Back.”

In fact, Kang Bong Kyu, the creator and producer of “Superman is Back,” laughs when I ask him what Korean dads think of him.

As it turns out, wives across Korea are nagging their husbands to be more involved, like the Superdads on TV. But they’re also asking to buy bigger homes in better school districts. So it’s a catch-22. Dads need to work more hours, and be less involved to provide for their families. 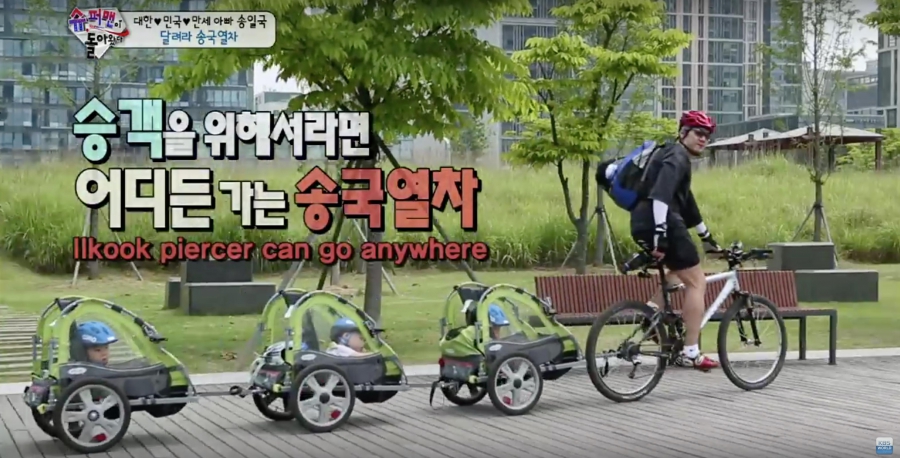 Actor Song Il Kook takes his triplet boys out for a ride around the neighborhood in their bike trailers.

So it makes me wonder — given the confines of Korean culture — is “Superman is Back” more of a fantasy than a reality show?  But Kang Bong Gyu suggests something else: Perhaps it’s a documentary series, he says.

When the show first started, he says, some of these celebrity dads were like strangers to their kids. The fathers called for help in desperation, as hidden cameras rolled in their homes. But the crew ignored them. After all, if real-life moms don’t get lifelines, why should these dads?

But, he says, the dads film for six to 12 months, and over time, they build genuine relationships with their kids. The transformation is so dramatic it even surprises the show’s crew sometimes. These celebrity dads go from stumbling and shedding tears, to getting the hang of parenting. They even seem to have fun with it.

But here’s the key to this change, Kang says.

“Mom needs to go away. Dads need to spend time with their kids on their own. There’s a role that fathers need to fill in their kids’ lives.”

Then he chuckles and admits, “But Korean men? We work too much, that’s the problem.”

Last night Kang was working until 4 a.m. — this as his 10-year-old kept texting to ask where he was.

So what’s it going to take to get Korean fathers to break the cycle? Soon-to-be dad YunJoon reminds me, these celebrities are being paid quite a lot to watch their kids. He insists he would do it, too, if he were paid.

But I ask him, how about mothers? Should they be paid for looking after their kids, too?