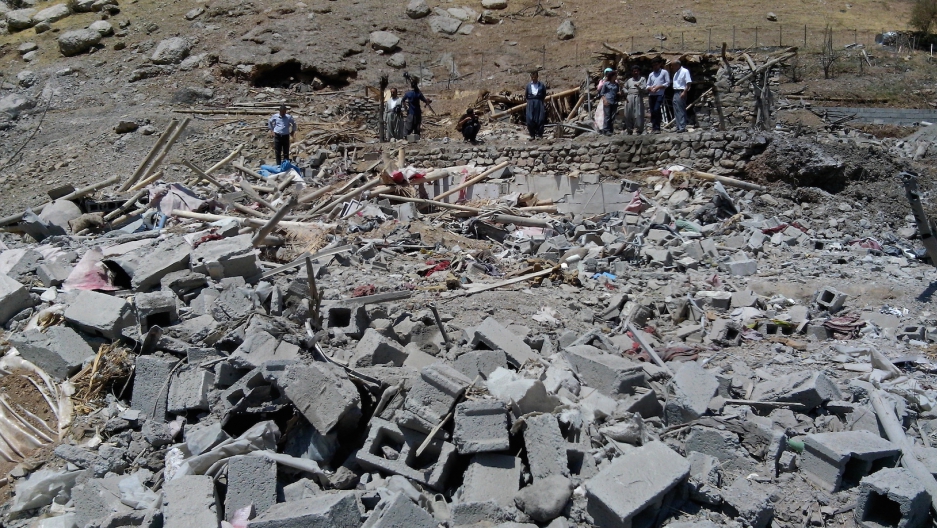 Houses destroyed by Turkish airstrikes in the village of Zergele, in the Qandil Mountains, northern Iraq.
Credit: Fréderike Geerdink
Share

QANDIL MOUNTAINS, Iraq — A renewed Turkish bombing campaign against a Kurdish militant group has killed eight civilians, according to residents of the mountainous region of northern Iraq where the group operates.

Turkey began bombing bases belonging to the Kurdistan Workers Party’s (PKK) in the Qandil Mountains on July 24, just hours after targeting the Islamic State (IS) in Syria for the first time.

The US has backed Turkey — a fellow NATO member — in its operation against the PKK. "Turkey has continued to come under attack by PKK terrorists, and we recognize their right to defend themselves against those attacks,” State Department spokesman John Kirby told reporters. Both the US and Turkey classify the PKK as a terrorist group.

The military operation was launched after an alleged IS-affiliated suicide bomber killed at least 32 people in the Turkish border town of Suruc and the murder of a Turkish military officer on the border, also alleged to have been carried out by an IS member.

The decision to target IS marked a significant change in policy for Ankara, which has so far avoided directly combating the Islamic State, despite its heavy presence on the Turkey-Syria border. It followed the announcement of a deal between the US and Turkey that would allow the US-led coalition formed to battle IS the use of Turkish airbases. The co-mayor of Qandil municipality, Muhamed Hasan, inspects damage to a mosque caused by Turkish airstrikes.

Before Turkey began bombing the Qandil, a shaky ceasefire between the state and the PKK had lasted for more than two years. The renewed fighting threatens to restart a messy conflict inside Turkey which is thought to have killed some 45,000 people.

The Turkish state has repeatedly described the PKK, which has fought a 30-year insurgency in Turkey for greater Kurdish rights, in the same terms it uses for IS. This is despite the fact that the PKK has played a key role in fighting IS in Syria and Iraq.

In the early hours of Aug. 1, the Turkish army bombed the village of Zergele in northern Iraq. The village is located in the Qandil Mountains, where the PKK has its hideouts and camps, and sits close to the border between Iraq and Iran in the autonomous Kurdistan region.

“In the first airstrike an elderly woman was wounded. People rushed to help her after the fighter jets left, but then a second attack started. We lost eight people,” said the co-mayor of Qandil municipality, Muhamed Hasan, as he sat in the local mosque on a tapestry that had been cleared of pieces of glass.

Lama Fakih, a senior crisis manager at Amnesty International in Beirut who investigated the bombing, told GlobalPost that civilians were among the victims.

The government has never respected one of the most basic rules of a ceasefire, which is that you don’t prepare for war

A visit to the bombed village by GlobalPost on Aug. 4 showed clearly that the bombed buildings were houses, five in total, in a small village. There were school books ("Kurdish language 3") and toys among the rubble of chunks of concrete and pieces of wooden roof structures, food cans, fridges, furniture in pieces and civilian clothes and shoes.

The few dozen houses in the village had broken windows, and some front doors had been blown in. The mosque, which stands next to the connecting road, is out of use: the door is gone, all the windows too.

One man walking through the debris picked up a pair of torn jeans and a blue sneaker. "There is a small museum here with memories of civilians who died here because of the war. I will place this in the museum,” he said.

The Turkish army has denied that civilians were targeted, stating that there were “no civilian residential areas within the impact range of the bombardment” and that the target was “a shelter for outlawed PKK militants.”

Since the bombing began, southeast Turkey has been hit by a wave of violence. At least 21 members of Turkey's security forces have been killed by the PKK, and several civilians have lost their lives during protests against the bombing in the Qandil.

The Qandil municipality consists of 61 villages, the co-mayor says, with some eight thousand inhabitants who live mainly off of agriculture and cattle breeding. Further up in the mountains, residents herd flocks of goats and sheep, and women are working in the fields harvesting cucumbers.

The renewed fighting could have profound implications for the PKK outside of Turkey. The civilian deaths have caused tension between the PKK and the Kurdistan Regional Government — even as the two fight on some of the same front lines against IS.

In the days after the strike, a debate began over the PKK’s presence in Qandil.

After the attack on Zergele, Massud Barzani, president of the Kurdistan Region in Iraq, urged the PKK to “withdraw” from the area so as to not endanger the lives of civilians any further. He also called on the Turkish government to return to the negotiating table.

Bese Hozat, who forms the co-leadership of the PKK in the field together with Cemil Bayik and is placed in the hierarchy right under imprisoned leader Abdullah Öcalan, reacted tersely.

"The bombings of the Turkish army scare us. At the end of July another village was hit but there was only material damage, years ago a whole family died when a Turkish bomb hit their car. Whether it would be safer here if the PKK was gone? Maybe ISIS would be here if it wasn’t for the PKK.”

Although many Kurds may agree with Bese Hozat that the PKK is fighting a justified struggle, the outcry against the renewed violence is broad in Turkey, including among Kurds. Politicians from the HDP, the Turkish party rooted in the Kurdish political movement, and the biggest opposition party CHP, have called on both sides to take their fingers off the trigger and resume peace talks.

But for Bese Hozat, it’s not so simple.

“We are in a state of war,” she says. “The government has never respected one of the most basic rules of a ceasefire, which is that you don’t prepare for war. The government has always continued to build army posts in Kurdistan [southeast Turkey] and to expand military infrastructure, the arrests of Kurds have never stopped, the killing of civilians continued. And now they don’t obey the rules of war: they kill civilians. We only kill policemen, gendarme and soldiers, never civilians, and during the ceasefire we killed nobody.”