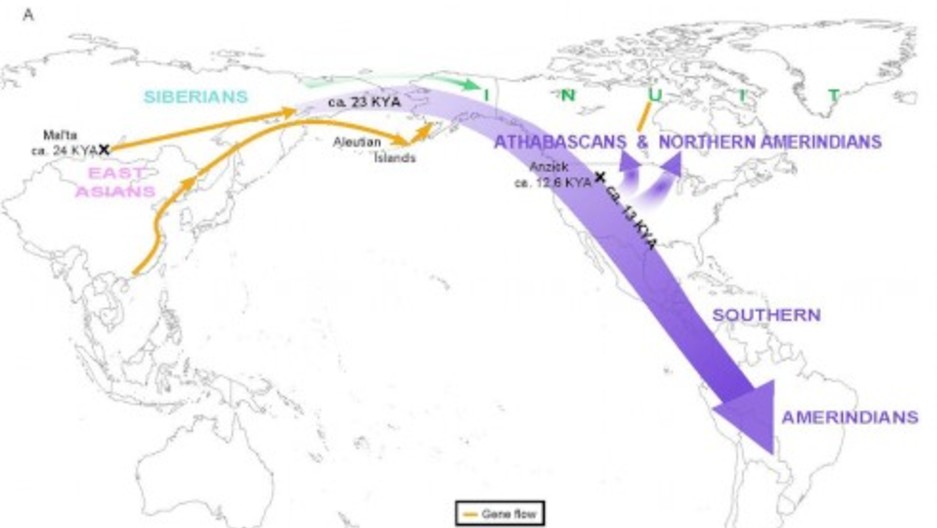 A graphic from the Raghavan et al. paper in Science illustrates the team’s finding that the ancestors of present-day Native Americans entered the Americas as a single migration wave from Siberia.

Scientists, historians and archaeologists have long sought to figure out how, when, and from where the first humans arrived in the Americas. One group of geneticists believe they are another step closer to finding that answer.

“Back then the sea levels were much lower because much of the water was trapped in ice during the Ice Age. And so you could actually walk from Siberia to Alaska. So that's what we think happened. And they had these 8,000 years to move across and spread — and plant the first evidence, actually, at about 15,000 years ago down in South America. So 8,000 years to do that,” says study author Rasmus Nielson, a computational biologist at the University of California Berkeley.

Nielson and a team of scientists have been using a new more precise type of genetic research called a “recombination clock” to make their calculations about the origins of Native Americans.

“When you pass on your DNA to the next generation, you pass a piece of DNA from the father and from the mother,” Nielson says, “You take the pieces of DNA and stitch them together. And this part of stitching the DNA together, of stranding it around, is called "recombination". So, you could take a piece of DNA from you and from me, you can look at the way it's been stranded, the way it's been stitched together, this pattern recombination, and also use that to date events. And that allows [us] to date everything much more precisely than we could do previously using genomic data.”

The results of Nielson’s research upends previously held theories on how and when Native Americans migrated to and through North America.

“It allows us to reject certain hypotheses that have previously been popular,” Nielson says, “Hypotheses that said the first Native Americans, well the ancestors of the Native Americans, [who] came into Alaska were stuck because they couldn't go down in what’s now known as the lower 48 states because they would be stopped by an ice mass that was lying at that part. But they actually came to Alaska a long, long time ago.”

David Reich, a professor of genetics at Harvard Medical School, has been working on similar genetic studies, trying to determine the geographic and genetic origins of people in South America. Reich’s study is also making waves in the world of science, and overturning previously held views of the origins of Native Americans.

Scientists have long theorized that Native Americans are descended from a single founding population of people that came over from Siberia or East Asia. Reich, however, believes there is an additional, more surprising source: Austral-Asia.

Reich, who published his study in the journal Science and Nature, tested people in Central and South America, and searched the globe for people they might be genetically related to.

“What we found in this study was that people in Amazonia, people in Brazil, were more closely related to certain populations outside of America than was the case for Central Americans, like native Mexicans. And that in particular they were most closely related to people from Austral-Asia, from Australia, from Melanesia and New Guinea, and other islands nearby. And so that was a huge surprise,” Reich says.

Reich’s study corresponds to Nielson’s study in an important way: both studies point to Native American migration dates that are much, much earlier than has been previously thought.

“We think, for a variety of reasons, that this ancestry came into the Americas a very, very long time ago. And we think that it potentially even came in around the same time as the other, although we do not have an exact date,” Reich says.

Nielson’s study also found evidence of Australo-Melanesian ancestry in Native Americans, further bolstering Reich’s theory. “We didn't have as strong of evidence, actually, as David Reich's team had. But we also saw traces of this. And we got excited,” Nielson said.

The next step for Reich, and his team will be to begin studying ancient DNA, to trace the origins of people who seem to have a connection to indigenous Australians and New Guineans, people whom Reich has begun referring to as “population Y.”

“The very exciting thing to do would be to try to obtain DNA from ancient Native Americans from different parts of the Americas, and see, or Siberia, and see if we can find this population Y. It hasn't been found yet in the few samples that have been studies, but we predict that it should be found because how else would there be an ancestry in Amazonia today if it didn't get there somehow,” Reich says.