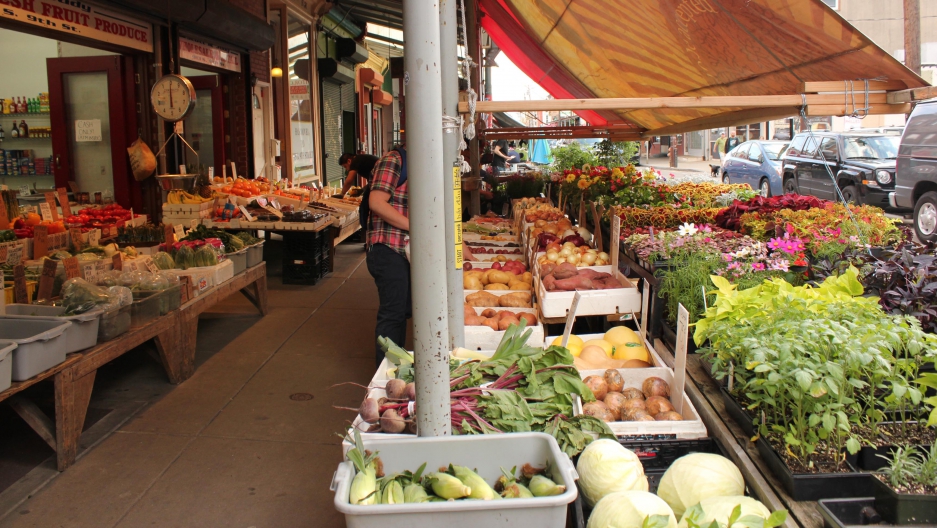 The Italian Market in South Philadelphia.

Every city has its immigrant neighborhoods. That's where you can go for authentic food, those imported ingredients from different parts of the world.

“The Italian Market” is a landmark of South Philadelphia. It’s billed as the oldest open-air market in the country, celebrating its 100th anniversary this year.

The local business corridor runs along a narrow street in an old row house neighborhood. The street is lined with tables that are loaded down with fruits and vegetables and plants. These days, they’re mostly run by Mexican and Asian immigrants, a sign of how the neighborhood has evolved.

But the shops selling chocolates, meat and pasta still have mostly Italian names on the northern end. They have a loyal fan base of the neighborhood’s long-time Italian residents and their descendants who return from the suburbs for familiar foods.

Emilio Mignucci runs one of the most successful shops, Di Bruno Bros. It has been in the same family for more than 75 years. The unofficial Mayor of the Italian Market has great affection for the history of the neighborhood and its traditions.

“They're what make up the culture,” he says. “The traditional things that you do during the holidays and the items that you want to cook with or to have and to eat and to remind you of your times in the old country.

“Today, the second the third the fourth generations, they just want to honor their parents and their grandparents.”

The stores sell some of the same products but they also tend to specialize. Di Bruno’s carries all types of cheese. Down a block, Talluto’s has fresh pasta. And at Claudio’s, there’s a whole wall of different types of olive oil, their signature product. The owner, Sal Auriemma, is such a connoisseur he even brings his own to restaurants. 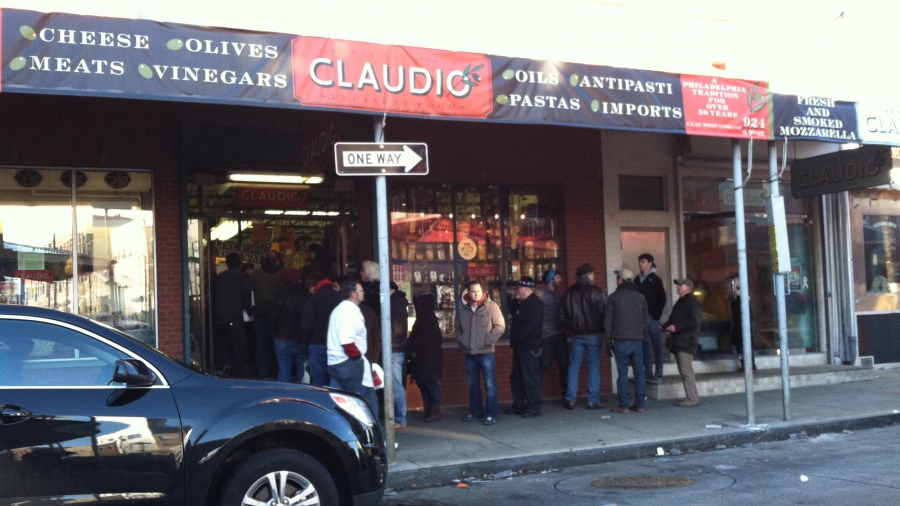 Claudio’s, which specializes in all types of olive oil. The owner, Sal Auriemma, is such a connoisseur he even brings his own to restaurants.

“It’s like a three-dose bottle,” he describes his trademark flask. “Enough for three people. And then I leave them the bottle. If I don’t finish it, I leave it.”

Auriemma’s father, the Claudio of the store’s name, started the business more than 50 years ago. An immigrant from a small town outside of Naples, Auriemma says his dad originally was a stonemason.

“I probably spent more time buying soda and running around,” he admits. But by 8 or 9 he had started to become — in his words — somewhat productive.

“I can remember grating cheese when I was like 8 or 9. He didn't have a problem with me operating electrical equipment. It was fine. So you know now you wouldn’t think of it.”

Besides cheese, Auriemma sells pastas from companies that have been around for hundreds of years. Colorful cans and bottles and porcelain jars of olive oil line the back wall and spill over onto other shelves. Auriemma sells somewhere between 80 and 100 tons of olive oil a year — more than 20,000 gallons — to people who walk in, to restaurants, to other stores.

“People have different flavor profiles they like,” explains Auriemma, who describes the varieties using language others might use to describe wine. “It's not always about which one is better — it's the flavor you like.”

“Olive oil from Spain tastes one way. Greek has its own style — Italian, Tunisian, Libyan, Turkish.”

Obviously, Auriemma prefers Italian. He first travelled to Italy with his father to visit the rest of his family but now he makes buying trips two to three times a year, traveling around the country sampling foods.

He stays up to date on the news in between trips on the phone with his suppliers, whether it’s the latest gas prices or the bugs that devastated last year’s olive crop, spoiling about 40 percent of the fruit.

“Early October,” Auriemma says, “they already knew it's not going to be good.”

Here at Claudio’s, Christmas does really start in July. The staff is already starting to assess what they need for the absolute busiest time of year in this neighborhood. Customers line up down the block to fill their Christmas baskets with purchases from the neighborhood. Isgro’s Bakery, around the corner, puts out a tent, with coffee, for the people who start lining up around 3 or 4 in the morning.

Another time I stopped by, I met Marc Badalucco, who stops in every couple months when he’s in town on business, a five-hour drive from his home in Saratoga Springs, New York.

“He’s got the most variety that I’ve seen and I’ve seen them all,” says Badalucco. His favorite product, the thing he puts in all his Christmas baskets, is a brand that happens to share his family name, Badalucco.

“I tell you now, there’s more people using it now up north now because I’m bringing it back,” Badalucco tells Auriemma.

“He keeps it in his trunk,” the shop’s proprietor jokes. “Anyone stops, he gives them one.”

On any given day, there’s a steady orbit through the doors of Claudio’s of people like this who know Auriemma. People of his father’s generation; people with a story to share:

"You want to make a friend, you offer them food,” says Auriemma. “Make a friend. I got lots of those.”

But of course it’s not just the food. A fancy food chain that imports these same products will never feel the same. That’s big business, and this is something different. As Auriemma puts it: there’s General Motors, and then there’s Ferrari. Claudio’s, he says, is Ferrari.