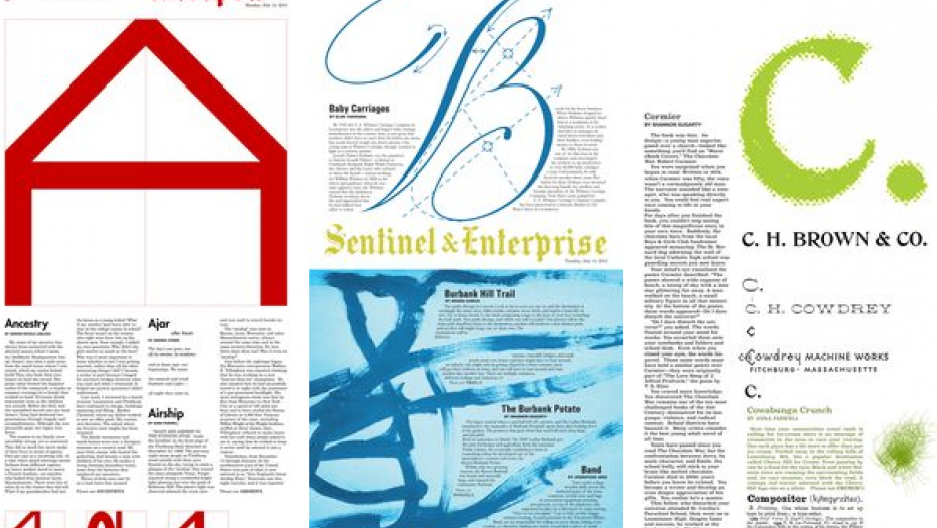 The first three days of "The Alphabet"

Most visual artists want to have their work displayed in museums, galleries, books, or even as installations in public parks. One artist, however, set her sights on displaying a series of art designs on the front page of her local newspaper.

Anna Schuleit Haber, a visual artist and MacArthur Fellow, is the mastermind behind the public art project known as “The Alphabet.” She worked with 26 different designers and typographers from around the world to come up with the designs for the project — a series of 26 custom letters of the alphabet.

And the newspaper is running stories connected to the letter in an arrangement around the typographical centerpiece on the front page.

Now the artists’ typographical work can be found all over Fitchburg: delivered to people’s front steps, stacked in residents’ living rooms, spread out over morning cups of coffee, and pressed up against the windows of newspaper racks and vending machines.

Schuleit Haber says her project was the result of searching for a way to connect the newspaper and its readers to the arts. “I said, ‘What if we connect the arts with your day-to-day rhythm? What if we use the actual front page to make art together? And the art would be visual as well as literal. It would be storytelling as well,” Schuleit Haber says, explaining how she persuaded the paper to let her take over the front page.

She decided the project would take the form of custom-designed letters of the alphabet because it was something the newspaper’s readers could easily connect to.

The Fitchburg daily agreed to the project, and decided to collect a variety of local, community, and human interest stories to accompany each of the letters. For example, when the letter ‘F’ ran, the newspaper put up a story about a man from Fitchburg who invented the pink plastic lawn flamingo.

So far, it seems the art project is being embraced by the paper’s readers. People have even begun collecting papers in the series, calling and asking where they can get copies of letters they don’t have in their set.

Schuleit Haber, however, says the public art project is about more than popularizing a local paper.

“We're also marking the sheer beauty of something that is rare. There's a rarity to the paper version which, in the end, lives a whole other life than something that's on the web. That's what I'm excited about as an artist. I love the feeling of paper, the tactile-ness. I love the smell of the ink in the press room when I go there at midnight. It's wonderful and just an honor and a great joy to work with a newspaper,” Schuleit Haber says.

“The Alphabet,” displays one letter on the front page of the Fitchburg Sentinel and Enterprise every weekday, and is set to continue through August 11.