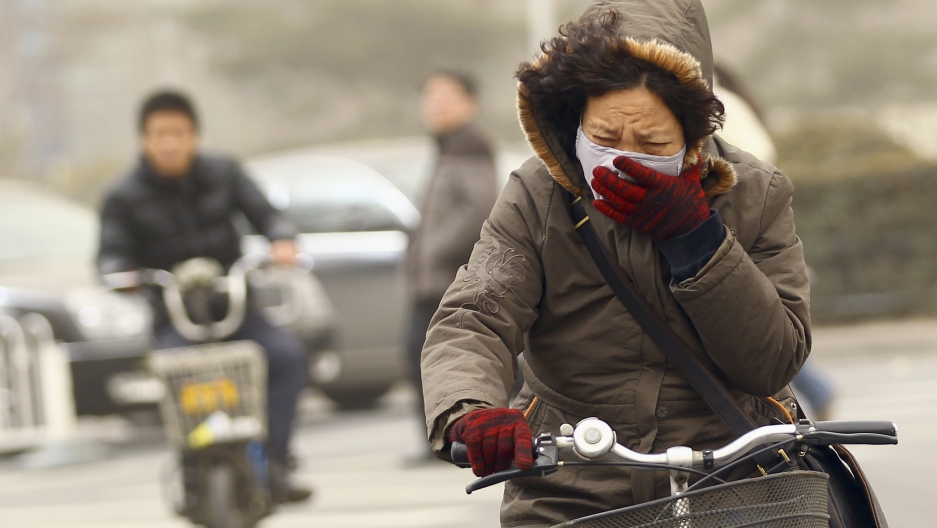 A woman wearing a mask rides her bicycle along a street on a hazy morning in Beijing, February 28, 2013. Beijing's environmental authorities said that day air quality in Beijing and nearby regions hit dangerous levels, Xinhua News Agency reported.

It has been a big week for climate change in the US, says Vicky Arroyo, head of Georgetown University's Climate Center.

President Barack Obama announced a final climate action plan on Monday. "It actually went even further in ambition, it's projected to achieve a 32 percent reduction in power sector emissions by 2030," Arroyo says.

And that would mean cleaner air, fewer cars on the road, more energy alternatives in our future.

This helps Obama as he prepares to go to Paris for the UN Climate Summit this November and December. He'll be armed with a game plan that other countries can look to.

In addition, Arroyo says, "[The US has] had some agreements recently with China that are significant, because I think it's really important to show that all the major emitting countries are on board."

Here at home, Obama struggles with Congress over climate change policy. But China is one place where leaders don't have to grapple with politics to implement such rules.

There's no Congress to worry about there, says China expert Mary Kay Magistad. But she does point out that while there's no problem making the rules, it can be tough to implement them.

"The Chinese state-owned enterprises that deal with oil had been told, years ago, to refine oil and gasoline up to a higher standard so there would be less pollution," she says. "But they didn't do it, because they preferred to have the profits."

Magistad remembers what it was like living in Beijing in 2013 — air pollution levels were skyrocketing, and people were fed up. That was a turning point.

"The Chinese government started recognizing, 'We could have a mutiny here on our hands. There is serious negative sentiment toward allowing development to continue in the direction we've been going,'" she says.

He "has said that he's declaring war on pollution," Magistad says.

Things are moving slowly, but even so, it's progress. "And things have gotten a little better," she says.