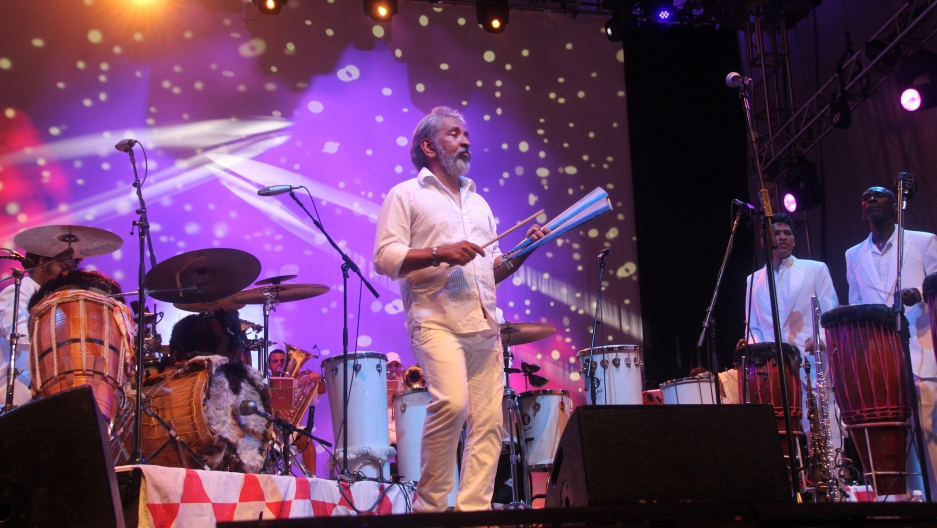 Letieres Leite and his Orchestra Rumpilezz play at Lincoln Center's "Out Of Doors" in New York City.

The repertoire Letieres Leite plays with his 20-piece Orchestra Rumpilezz is equal parts jazz and Afro-Brazilian.

In fact, when Steven Bernstein, a jazz trumpeter and composer who’s collaborating with the group on their North American tour, first saw them last year in Germany, he saw a combination that he'd always dreamed about.

"What if you combined the rhythmic beauty and complexity of Afro-Cuban, Afro-Puerto Rican, Afro-Brazilian, whatever you want to call this kind of rhythm, with a Duke Ellington sense of orchestration and magic. This band had all that," Bernstein remembered last week as he waited outside of a classroom at City College of New York, where the band would soon start rehearsing.

But Leite says the local part of that combination — the Afro-Brazilian music of his home state of Bahia, wasn’t actually appreciated in Bahia when he was growing up.

“There are many different reasons for this, but the first is that there is a prejudice against black culture — not only in Brazil but worldwide,” Leite said, speaking through an interpreter. He describes a mistaken belief that Afro-Brazilian music lacks the kind of rigor that European music has.

One reason it's thought to lack this rigor, he says, is because the layers of rhythmic nuance are just hard to capture on paper. So, if you can't write it down and study it, how rigorous could it be?

Leite spent years in Europe studying European classical music. But he also realized there are some things that you can't learn in books.

“To learn the oral tradition of African rhythms, you have to feel it in your body. Then you can add the rest.”

This Leite song, Floresta Azul or "Blue Forest," is built entirely on an African foundation. The melody comes out of candomblé, a religion that mixes African beliefs with bits of Catholicism. The rhythm comes from candomblé too — it's called agadir, and it's one of Leite's favorites.

“For me this is a very emotional song to play, this rhythm is a very majestic rhythm,” he says. “It’s hard for me to talk about. It touches me on a deep level.”

Arturo O'Farrill hears these levels in Leite’s music. He’s a pianist and leader of the Afro-Latin Jazz Orchestra. He's also working with Leite and his group while they're in town. He says there's a lot of concern over defining what is and is not jazz these days. He thinks Leite's music is refreshing because it ignores that.

"They're not centrists, they're not conservatives,” O’Farrill says, laughing. “They're changing the game, which I admire. And folkloricism of any sort is a highly evolved, and brilliant and complex music, poetry, dance. Amazing what people come up with when they're not ensconced in institutions."