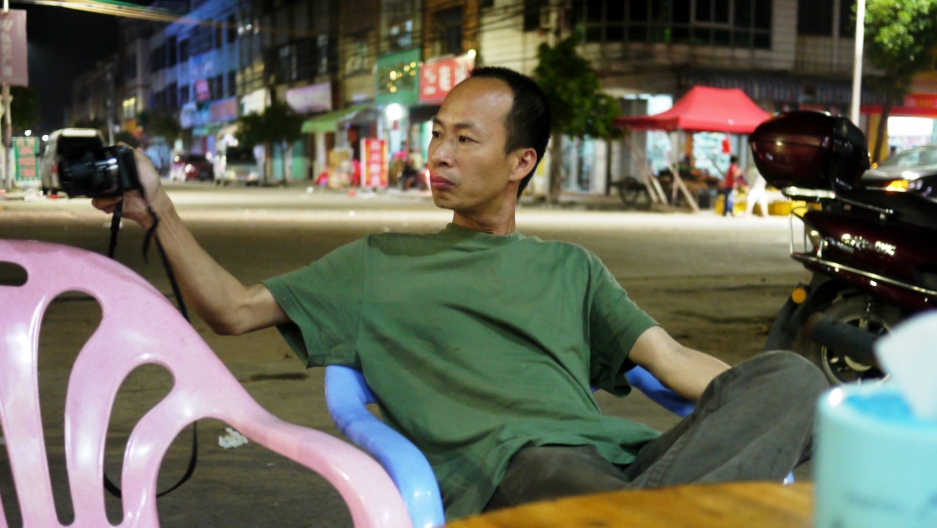 Filmmaker Zhu Rikun in his home village, Huang Niu Tian, Guangdong province in January, 2014. Home is an elusive concept to Zhu. His village is not the same as he remembers, he was monitored closely in his Beijing home. In the fall of 2014, he moved with his family to the US.

Not literally, but in a philosophical way.

"I still continue my job as a filmmaker," he says. "I just feel homeless. I don't feel any home anywhere, in China or the United States."

Zhu was the artistic director of the Beijing Independent Film Festival from 2006 to 2011 and is an acclaimed producer and director of independent film in China. In the years before he left Beijing, he was monitored, placed under house arrest and detained by authorities. The festival was shut down last summer. Zhu moved to the Hudson Valley, New York in the fall under a visa program for artists of extraordinary ability.

In a sense, both Zhu and the Beijing Independent Film Festival have become homeless, squeezed out of China's increasingly tight space for artists and activists.

Next month, his film "The Dossier" will be screened in New York City as part of a special series of independent films from China. A sort of stand-in for what was blocked Beijing, Cinema on the Edge is an almost month-long event of 27 films curated from the Beijing festival that never took place.

Shelly Kraicer, an independent scholar and critic of Chinese films, says he helped organize Cinema on the Edge to showcase excellent films. Filmmakers in China who operate outside the commercial arena are "inventing themselves," he says. "They're inventing their present and their future. It's that giddiness and dizziness that leads to interesting cinema."

The series was entirely funded on Kickstarter. They met their goal of $8,888 (eight is a lucky number in Chinese cultures) in one week and then reached their secondary goal of an additional $5,000 before the screenings begin this week. Kraicer and two of his colleagues volunteered their time to create the event in consultation with their colleagues in Beijing.

Cinema requires a permit in China. These films, Kraicer says, are art and thus exempt. The Beijing Independent Film Festival operated for over a decade in that grey zone of censorship. Under president Xi Jinping, however, things have shifted. Before, if something was not explicitly forbidden, it could exist, Kraicer says. "Now, anything that is not explicitly permitted can be repressed."

The hazards for independent Chinese cinema
Zhu Rikun wrote in the New Statesman in 2012: "Naturally, the government has never liked independent films. Over the past few years, the festival that I set up has hardly ever been able to run smoothly."
Read more

In the few years before Zhu left Beijing, he was put under house arrest and detained. People, from various government offices and sometimes in plain clothes, stood outside his home and watched him. That scared his young daughter, which is why he decided to leave for the US.

"These directors are not making films to delight and provoke foreigners," Kraicer says. "They're making them to engage their neighbors. What the hope is that these directors will at least be inspired by and encouraged by the fact that these films are being seen."

China film scholar Qi Wang of the Georgia Institute of Technology says that the films are part of a cultural phenomenon. It's not just politics, but "aesthetic innovation" that makes this series so exciting. "It's my hope that someday more artistic films can be seen more widely, more readily by audiences," Wang says. And she hope that censors in China play a lesser role as these types of films gains in popularity.

For his part, Zhu does not expect that average Americans will be interested in the screenings, but he appreciates the opportunity to see the films. His film in the series is about the Tibetan writer Tsering Woeser. It pushes the boundaries of traditional documentary; much of the film is her behind table, reading a secret government document about her activities. "Film can serve as a communication, at least," Zhu says.

In his new home not too far from New York City, people at the market or auto repair shop ask him about China. He likes to answer their questions. And he likes the natural beauty of the Hudson River.

Still, home is elusive. His parents and brother are still in China. "I don't have much relationship with this place or the people here," he says of New York. "Cars here are very fast, people are very busy."

Though he lived there, Zhu is not from the bustle of Beijing. He comes from a small mountain village in Guangdong, about two hours from Hong Kong. Even when he returns to visit, though, it's not the same.

"The people are different. All they talk about is how to make a fortune quickly. There are almost no villages in China — there's just old people and a few children left behind."

"Even in China," he tries to explain, "we are also homeless. We don't feel any home."

Cinema on the Edge runs from Aug. 7 through Sept. 13 at various venues in New York City. Zhu Rikun will participate in a Q&A after a screening of The Dossier on Aug. 24 at the Asia Society.