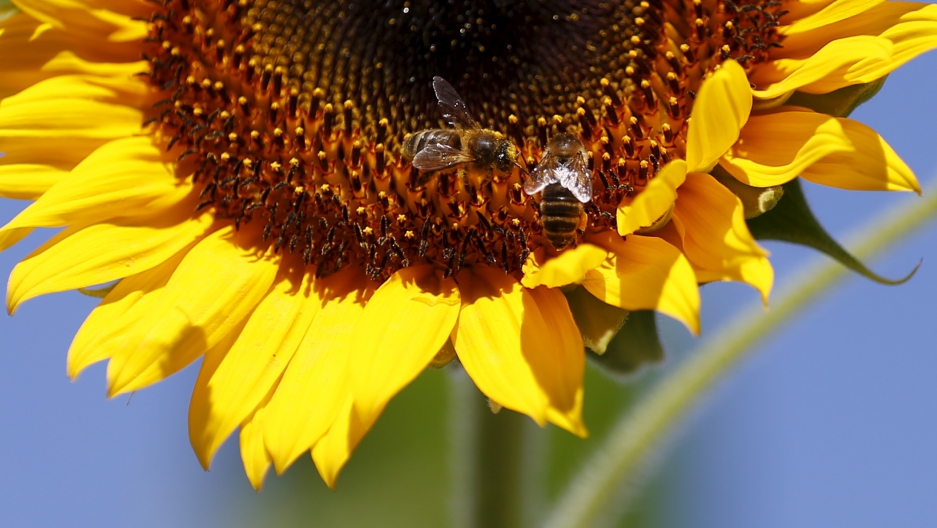 Bees are seen gathering pollen on a large sunflower, part of a labyrinth made of some 8,000 sunflowers in Mons, Belgium

A new study examines the death, disease, and health issues humans might face if a worldwide decline in animal pollinators continues.

Fruit, vegetables, nuts, seeds, honey: these are all nutrition-rich foods that are produced with the help of animal pollinators, especially bees. In fact, an estimated 35 percent of the world’s food is dependent on animal pollinators.

A new study published in The Lancet examines what might happen to humans’ health if there are not enough bees, birds, insects and other animals to pollinate the food that humans rely on for important vitamins and nutrients.

Dr. Samuel Myers, a Senior Research Scientist at the Harvard T.H. Chan School of Public Health and a coauthor of the study, says fewer pollinators means more vitamin deficiency, more sickness and even death for humans.

Myers’ study examined 224 types of food in 156 countries, and what might happen to the people in these countries if there was a 50 percent, 75 percent or even 100 percent decline in animal pollinators.

“What we found was that in the least developed countries, particularly in sub-Saharan Africa and South Asia, we see a significant increase in the risk of vitamin A deficiency and folate deficiency,” Myers says.

Sub-Saharan Africa and South Asia, however, were not the only places affected by shrinking bee, insect, and other animal pollinator populations. Myers says the developed world would be even more severely affected.

“People in more developed settings were more vulnerable to pollinator declines because their risks of the non-communicable diseases, of heart disease and stroke and certain cancers, their baseline risk was already higher. So the loss of pollinator dependent food groups increased their risk still further. We found large burdens of disease in places like Eastern Europe and Central and Eastern Asia in response to pollinator declines and really across the developed world,” Myers says.

Myers’ study also zeroes in on whether the declining pollinator populations of individual countries would have a wider impact on the public health of neighboring countries and trade partners. What the researchers found, however, was that 82 percent of the total burden of disease from declining pollinators was the result of declines within that country. “That's an important finding because it suggests that how a given country manages its own pollinator populations actually has very significant bearing on its own public health,” Myers says.

The threat to humans’ supply of food and nutrients is compounded by the fact that the world’s population is expected to grow by billions of people. What’s more, scientists are warning that there are an increasing number of threats to the world’s supply of food as a result of climate change.

“We need to think about a whole suite of complex changes which are under way and that pollinator declines is one part of the story, but so are impacts of climate change on agricultural yields and changes in the status of global fisheries, changes in the nutritional value of food in response to carbon dioxide in the atmosphere, into complex environmental changes which are going to be interacting to produce what I believe will be significant headwinds in trying to meet growing demand for food around the world,” Meyers says.

“We cannot continue to rapidly transform all the natural systems on the planet without experiencing consequences to our own health and well-being, and what's been viewed for decades as a growing environmental crisis really needs to be viewed as also a growing public health crisis,” Meyers adds