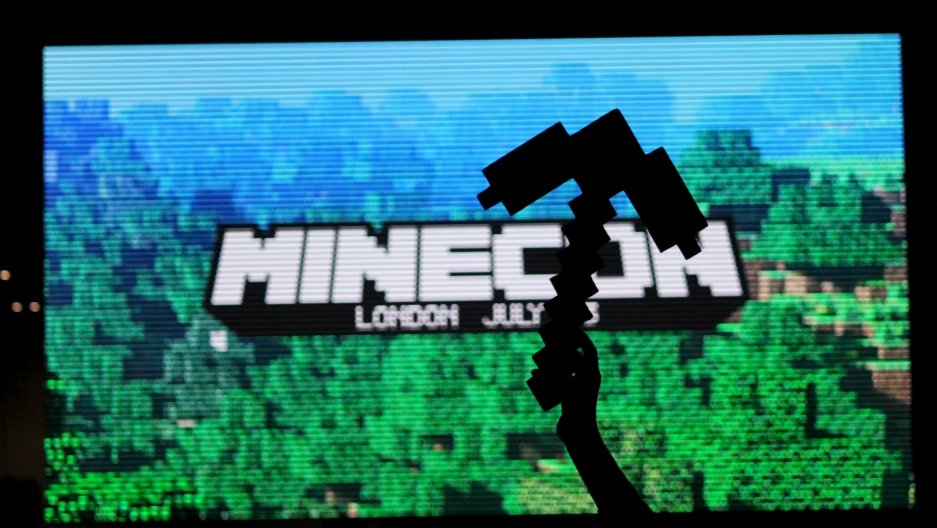 A fan of video game Minecraft waves a foam pick-axe in front of a screen display at the Minecon convention in London July 4, 2015. Minecraft, the focus of Minecon, is often considered one of the more educational video games.

Many people believe video games are intellectually lazy and have a poor effect on students. There are, however, a growing number of teachers, students, and parents who are using one video game in particular as an educational tool.

Minecraft is a video game that has gained an enormous following. According to Minecraft.net, more than 20 million people have purchased a version of the game.

Zack Klein, CEO of DIY.org and co-founder of Vimeo described Minecraft in terms of another popular childhood toy — Lego.

“Minecraft is basically virtual Legos, except you can have an infinite number of blocks to play with. And instead of being just plastic, the blocks can have different properties. They can be stone, they can be wood, they can be water, they can be shrubs. And kids play with them just like they might with Legos. They build anything they can imagine, and they can do it in a space with other kids online,” Klein says.

Minecraft isn’t just popular with kids. Many teachers have begun using the game as a learning tool in their classrooms. There are reports of educators using Minecraft as a base for art, history, geography, philosophy and ecology lessons.

Bruce Homer, an associate professor of educational psychology at the City University of New York, argues video games can be a good medium for learning.

“Video games, the way they’re built, tap into, I think, a lot of key features that address who children are and what they like. So they're interactive, they're social, and, you know, visually and emotionally stimulating. And there's learning in every video game. The key is to develop games that kids can actually learn stuff we want them to learn,” Homer says.

Some people, however, are finding that kids are using Minecraft as more than an afternoon diversion, or a fun way to complete a geography lesson. Klein discovered, during a recent search of his DIY.org site that almost all the architecture projects kids had stored on the site were buildings that had been designed in Minecraft.

“It occurred to me that kids weren't using this game as a game necessarily, they were using it as a new kind of tool that allowed them to 3D model,” Klein says.

Still, other than anecdotal evidence, there is a lack of knowledge about how well kids are able to use skills they learn in Minecraft in the real world.

“We have the initial evidence, which is great stories from teachers talking about how much their students love it,” Homer says, “The next step I would say would be to actually do some research on it — where we compare how well students learn from this compared to other education interventions and see what activities within Minecraft lead to the best learning outcomes.”

Homer adds, however, that Minecraft might be one useful step in a time-tested strategy for teaching: exposing kids to concepts in multiple situations. If a student hears a geography lesson from their teacher, and also gets that lesson repeated virtually in Minecraft, and then again during a “real life” experience, they are much more likely to retain the information and fully understand the concept.

In the end, there are many people, including parents, educators, kids, and developers, who remain excited about the possibilities of Minecraft as an educational tool.

“I think we don't quite understand the influence that Minecraft has had and will have had on our culture, now that an entire generation of people — these kids — know how to build and think in three-dimensional spaces. What sort of art, and communication and business will now be possible because there is a huge consumer base that understands this tool?” Klein says.