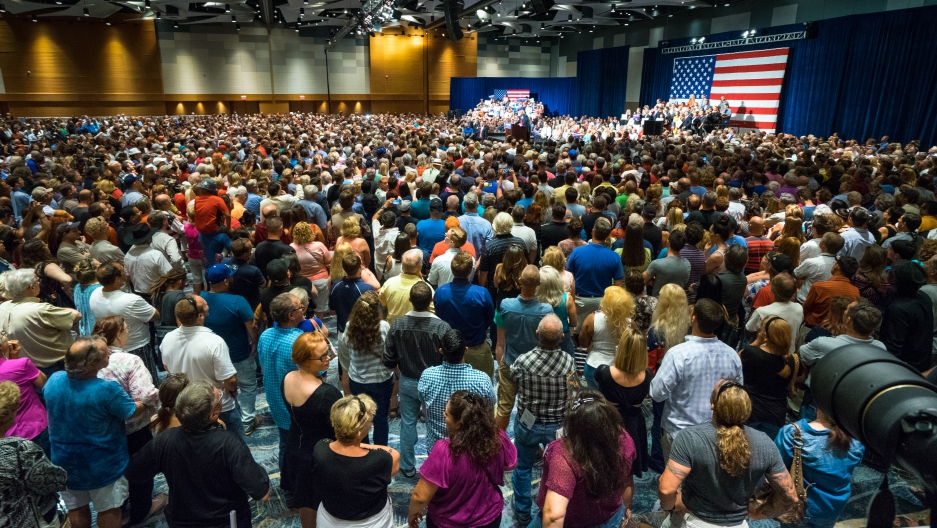 Republican Presidential candidate Donald Trump addresses supporters during a political rally at the Phoenix Convention Center on July 11, 2015 in Phoenix, Arizona. Trump spoke about illegal immigration and other topics in front of an estimated crowd of 4,200.
Credit: Charlie Leight
Share

LOS ANGELES — A veritable civil war is brewing within the Republican Party over the issue of immigration.

And Luis Alvarado, a Southern California Republican and former operative for Ronald Reagan, George H.W. Bush and John McCain, is doing what he can to be right in the middle of it.

Alvarado, a strategic consultant, worries aloud about the direction in which some of the Grand Old Party's leading voices are headed. He is determined to move the party away from its traditional stance of opposing deep immigration reform, seeking to win over a Latino constituency he believes is naturally more conservative, even as presidential contender Donald Trump appears to be pushing the entire field toward a tougher rhetorical stance on illegal immigration ahead of Thursday night's televised debate.

“We are trying to silence the voices that are spilling the venom that has caused Latinos to distrust Republicans,” said Alvarado. “This is allowing us to be able to have conversations in the districts where Latinos live, to trust us to govern.”

President Barack Obama won around 75 percent of the Latino vote in 2012, and most analysts agree that Republicans will need to get 40 percent of that vote or more to win back the White House.

With the presidency on the line, the Republican leadership has stepped in to moderate some of its rhetoric about immigration. Republican National Committee Chairman Reince Priebus reportedly asked Trump, who has emerged in recent polls as a leading candidate to become the party’s nominee, to cut back on his inflammatory remarks towards Latinos.

A Washington Post/ABC News poll taken last month found that 13 percent of Hispanics had a positive opinion of Trump, while 81 percent held a negative view.

Alvarado, who now works for the Los Angeles-area Revolvis political consulting group, has called out and criticized some of the other outspoken opponents of immigration reform in the party, including Iowa Republican Rep. Steve King, the unofficial leader of the immigration “restrictionists.”

King has repeatedly caused controversy, making statements perceived by Latinos and even party members such as Alvarado and House Speaker John Boehner as racist. One of his most recent remarks suggests illegal immigrants could be deterred from crossing the border through an electrified fence, similar to the way livestock is contained.

King also disparaged so-called DREAMers — immigrants brought without papers to the US as children — telling Newsmax in 2013 that "for every one who's a valedictorian, there's another 100 out there who weigh 130 pounds and they've got calves the size of cantaloupes because they're hauling 75 pounds of marijuana across the desert.” He never retracted that statement.

There was a time when Alvarado was more optimistic. Back in 2013, Rubio and three other GOP senators joined four Democratic counterparts to form the Gang of Eight, who pushed hard for a comprehensive immigration reform bill.

“Some extreme voices in the Republican Party were able to hijack that process and re-inject some of the negative messaging that has now sent other members back to their corners,” said Alvarado. “And we continue to not find any consensus that helps the country to move forward.”

“The brand is the problem,” said Hoffenblum. “This is a serious problem. The party is still in denial. Not all Republicans are racist, but it seems like all racists are Republicans,” he said.

For Republicans like Hoffenblum, California itself is the case that proves the point. Back in 1994, then incumbent Republican Governor Pete Wilson backed a virulently anti-immigration Prop 187 (later tossed by the courts.)

The backlash to Prop 187 was ferocious, with hundreds of thousands, perhaps millions, of Latinos registering to vote. In the last 21 years Republicans have been unable to elect a single state-wide office holder with the exception of former Gov. Arnold Schwarzenegger.

To change the negative public perception of the Republican brand, Alvarado is fighting to strengthen Latino voices and representation within the Republican Party while staying in its mainstream.

Born in Los Angeles, Alvarado was raised by a Mexican mother and a Salvadoran father and became an immigrant in Central America at the age of nine, when his father decided to start his own business in his home country.

The Salvadoran Civil War in 1979 compelled the family to move back to California, where Alvarado began working at Los Angeles City Hall. He gained access to elected officials, eventually becoming a political consultant with a focus on Latino issues. His goal was to strengthen the voice of Latinos within the Republican Party.

“If I did not like it, then it would be best to change it from the inside,” he said.

The Republican Party has recently been in the headlines for blocking and even trying to sue the president over the liberalizing executive actions he took on immigration late last year, an issue that resonates with Latino voters.

“The problem for the party is that the brand is now so damaged that many Latinos see the GOP as the anti-immigration party,” said Hoffenblum.

Republicans have no trouble getting elected to city council in heavily Latino districts, according to Hoffenblum. “But the reason that works is only because they don’t have to put Republican under their name in these races,” he said.

To him, there needs to be a shift in the higher ranks of the party in order to rebrand the party.

Alvarado agrees. The key to gain some momentum and win over the Latino community and future elections in general is to elect Republican Latinos to higher offices in swing states with enough Latinos to make a difference, he said.

In his eyes, the demographic change throughout the US is too big for Republicans to ignore.

“How we’re going to talk to those Latinos is going to be a big, big factor. If you’re a strategist in one of those swing states and you don’t have a strategy for the Latinos there, you are limiting yourself,” he said.

Meanwhile, the Republican leadership in Washington is denying that racism is too prevalent within the party, Hoffenblum said.

“Look what’s going on in Washington, they can’t even govern. You got these 53 people who want to shut down the government because Barack Obama won’t send all these people home,” he said.

While Alvarado speaks out against anti-immigration voices and has worked to strengthen Latino identity within the party, he maintains that he supports immigration reform but is “completely against executive action.”

Now, party operatives are anxious to see what will become of the presidential candidacy of former Florida Gov. Jeb Bush. Married to a Mexican and with a Spanish-speaking son, Bush has supported the more moderate wing of the party on immigration but, like Rubio before him, as a candidate he has began to waffle on his support for comprehensive reform.

Yet on July 27, Jeb Bush told Telemundo that he supports a pathway to legal status for all 11 million undocumented immigrants in the United States. Speaking in Spanish, he noted his Hispanic family ties, arguing that his “secret weapon” in his campaign for president was that he is “part of the community.”

While he hopes that this fact can help boost his support beyond the traditional Republican base, Bush said he knows that it will likely cause other candidates to come out against him.

"It's OK to get outside your confront zone a bit,” Bush said. “It's OK that not everybody is not OK with my views. It is not OK to not try. That's the difference.”