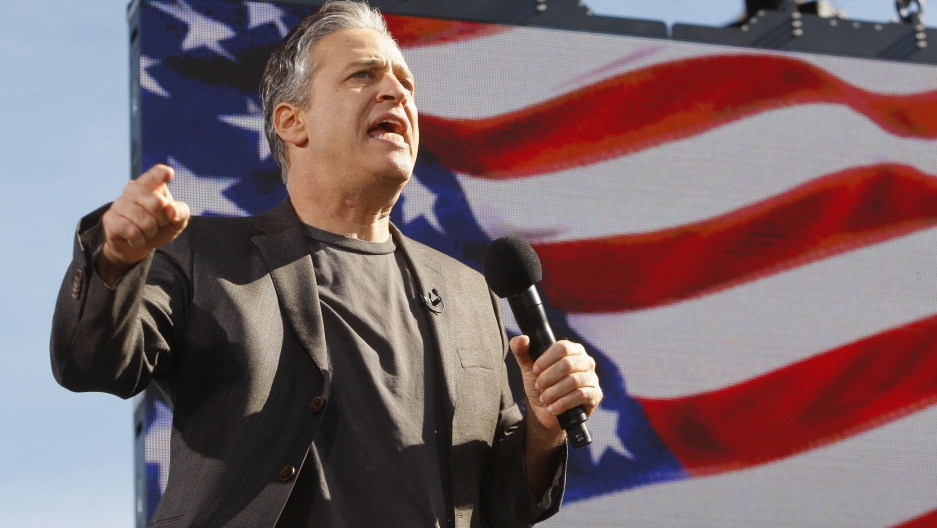 Comedian Jon Stewart addresses a crowd during the "Rally to Restore Sanity and/or Fear" in Washington, October 30, 2010.

It's a sad night for comedy fans across the globe. News junkies, as well. It's Jon Stewart's final time hosting The Daily Show.

His show has inspired numerous copy-cat shows in places like Egypt, Iran, Chile and Thailand.

Through the years, he's been able to lay bare some of what many Americans consider absurd policies and statements around immigration.

Like this bit, where Stewart shows why it's ridiculous to have people lecturing kids fleeing war to fill out proper paperwork.

In addition to regular segments on immigration, Stewart also had a Senior Pandering Correspondent, played by Al Madrigal. They show what it's like to have a political party pander to a people, only for a short time. And in true Daily Show style, they make the point with churros.

Madrigal had some help with that bit from Lalo Alcaraz. The cartoonist and comedian is a fan of the show and a friend of the correspondent. Alcaraz is sad to see Jon Stewart leave the show, but he'll remain impressed by what Stewart did, given the material.

"There's nothing tougher than trying to make a funny about hardcore issues," he says.

For Alcaraz, the 16-year run of Stewart was a constant bar for comedians to match. “Us, as editorial cartoonists, we are always trying to beat the funniest joke out there or to write the funniest jokes. We’re going to miss feeling like Stewart’s A-game is the thing to beat,” he says. "I don't know that we're ever going to get a fountain of comedy in the future. It may not happen for another generation."

What Alcaraz will really miss is the measured outrage the show provided.

“Instead of your veins popping while watching the evening news, you’re laughing instead.”