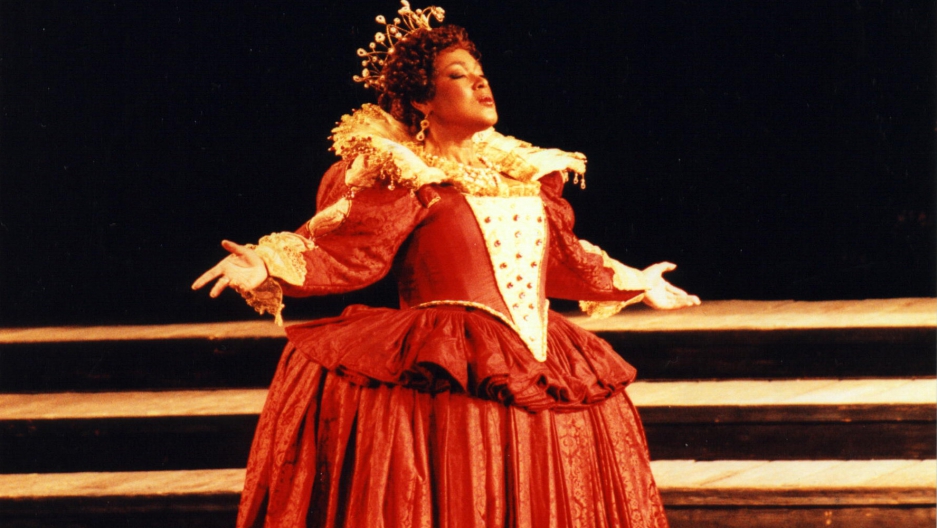 Mezzo soprano Carolyn Sebron performs as Queen Elizabeth I in the opera Maria Stuarda at the Monte Carlo Opera (1997).

The upcoming  production of Verdi's Otello at New York's Metropolitan Opera might surprise some opera lovers.

Latvian tenor Aleksandrs Antonenko will sing the lead role as Otello, but he will not appear in blackface-style makeup.

That marks a big change and may reflect a new cultural sensitivity. It’s the first time without dark makeup since 1891 when the Metropolitan Opera Company first presented the Giuseppe Verdi opera based on Shakespeare's “Othello.”

Here’s how the Met explained its decision to drop the longstanding use of theatrical, blackface style makeup:

"Although the central character in Otello is a Moor from North Africa, the Met is committed to color-blind casting, which allows the best singers possible to perform any role, regardless of their racial background. Latvian tenor Aleksandrs Antonenko is among a small handful of international dramatic tenors who can meet the considerable musical challenges of the role of Otello, one of the most demanding in the entire operatic canon, when sung without amplification on the stage of the world's largest opera house. In recent seasons, Antonenko has sung the role to acclaim at the Royal Opera in London, at the Paris Opera, and with Riccardo Muti and the Chicago Symphony Orchestra at Carnegie Hall, and we look forward to his first performances of the role at the Met in Bartlett Sher's season-opening new production. Antonenko will not wear dark makeup in the Met's production."

There’s been a range of reactions to the change. Some say the MET is responding to the chorus of angry emails sent in reaction to its Fall publicity brochure that seemed to show the lead tenor wearing dark bronze make-up. Others say the emphasis should be on the tenor's voice, and that opera directors should have some artistic license in presenting historically based, dramatic roles.

“It’s about how it’s being presented,” says African American mezzo soprano Carolyn Sebron. “If you are doing a stereotype or a caricature of a people, whether it’s Africans, African Americans, or Asians for example, then there’s a problem because it’s offensive from the very beginning. But it’s something different when you’re trying to re-create a particular vision of history.”

Body paint, she explains, as it’s used in the opera or by dancers, is legitimately part of the reality of theatre, whereas blackface used to caricature or stereotype people is, by definition, offensive.

Sebron, who's now studying voice pedagogy at Shenandoah University in Virgina, says the MET’s decision is an important step, but  that there needs to be more effrort to  nurture diverse singers. “It’s important to have more opportunities for singers regardless of who they are, regardless of their color or their ‘race’, to have opportunities for singers to use their talent to the utmost of their ability. So if there is an Otello, a black tenor who can sing Otello, then let’s find him.”   That may be easier said than  done, she says, but “we need to cast a wider net, and create opportunities, so we can find the next great black Otello, the next great African American Leonora, or the next great Latina Carmen.”

”These are not just issues that plague opera, “says Alison Kinney who writes about the MET's decision to abandon blackface style make-up and the legacy of  African Americans in opera for Hyperallergic.com . “It’s a matter of systemic inequality, and about how we find great singers, how we nurture talent, how we make sure that the people who are perfect for the roles, the best voices, make it to the stage.“

"Sadly, opera has a big history of representing the other in makeup," says musicologist Naomi André, a professor in women's studies, Afroamerican and African studies at the University of Michigan. She points to roles such as Otello and Aida, as well as Asian characters as in Puccini's "Madama Butterfly." The use of blackface style make-up has lingered in the opera world, but that's about to change.

"I think we're finally in the time where people are saying, 'Whoa, wait a minute. This doesn't happen in any other dramatic arena,' " André said. "I think opera audiences have just been a little slower."